WILL YOU SOON BE ASSIGNED A “CITIZEN’S WORTH” SCORE? 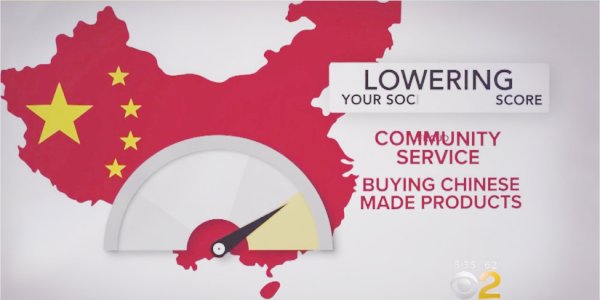 I don’t think people realize how close we are to having a global system where everyone in the developed or developing world is assigned some kind of “citizen worth” score which will enable governments to determine how valuable you are to your nation’s society. This kind of system is rapidly taking shape in China and may be fully implemented there by 2020. What began as a “social credit score” for citizens in China has morphed one which uses metadata-gathering to decide each person’s intrinsic “worth” to the Chinese government. The three links below all address this scoring system, but the first link has a very extensive description of this scoring system and I recommend it to all readers.

The citations in quotes below are all from the first link. The Chinese citizen-scoring system utilizes all kinds of biometrics and behavioral data which is “all under the same Orwellian umbrella.” A high score on your personal profile will “open doors for you” in all kinds of ways, and a bad score could make it almost impossible for you to function in society. For those who read the Divergent books or saw the movies based on those books, you will understand it when I liken a bad score on the Chinese personal rating system to one which makes you essentially “factionless” in China’s society. Millions of Chinese people with bad scores will be blacklisted, which can result from such innocuous things as spending too much time playing video games, making late payments, breaking traffic laws, or engaging in online behavior deemed harmful in the state’s eyes (Yes, the State will watch and evaluate every aspect of your life). With bad personal scores, Chinese citizens will have restricted travel freedoms, not be allowed to buy luxury goods or be barred from certain bank loans. You may even get a lowered score simply because your social media friends have low scores–talk about institutionalizing “guilt by association!”  If you have a really good personal rating score, you can rent cars without deposits and even skip airport security checks! The Chinese government is now working with private entities to combine facial and voice recognition systems to track everyone’s activities and have artificial intelligence systems evaluate all personal data. Given that China’s population is so large, when this system is fully implemented, roughly 1/7th of the entire globe’s people will be scored in this Orwellian system–where it will be almost impossible to even correct the system’s mistakes.

Do you think such a system could never come to the USA or other western nations? Think again. It may already be closer to becoming a reality in the USA than you realize. While Americans are very familiar with the financial-rating system that gives everyone in America a FICO score, they may not realize that Americans already have “dozens of scores” on which they are ranked by government and private corporations. Eerily like China, Facebook has patented a rating system which will lower your personal score if your Facebook friends have lower scores (and Facebook is global). This rating system will be able to reject bank loans for you if your score is too low. The first link has a sidebar article entitled “secret scores” which lists some of the secret ratings systems via which Americans are already being “tracked” and “rated.” Did you know that besides having a FICO score, you may have a “criminal justice score,” a “consumer score,” a “keeper score” (which utilizes your activities in the LinkedIn system), a “frailty score”, and a “charitable donor score?”  Surely, all these ratings are already being merged into a single rating system for all Americans (or other Westerners) not unlike the Orwellian one being implemented in China

The first link also depicts an imminent global system where you will buy things via a facial recognition technology on your smartphone. Think this is years off? The technology already exists and is now being implemented in China as the “Smile to Pay” system. The first link notes that in 2016, the USA recorded “roughly $112 billion” in mobile phone payments. China had an astronomical $5.5 trillion in mobile phone payments in 2016 and that total is, no doubt, rising rapidly as China implements its continuous digital tracking and monitoring systems for all Chinese citizens. This kind of system is easier to implement and test in a dictatorship like China, but you can be sure all global governments and big digital companies are watching the Chinese tracking system very closely and are readying themselves to implement it globally in the future. China is very close to a cashless society already.

The Bible has a prophecy in Revelation 13 that a global system will arise in the latter days that will track and monitor all financial systems throughout the world as part of the implementation of a new global political/financial system called the “beast.” The beast system, will “go global” after the current global political/financial system called “Babylon the Great” collapses, as Revelation 17-18 prophesy. Notice Revelation 13:16-17 which prophesies that the final “beast” system will mandate certain financial controls on a global basis. It foretold that the global beast system will require everyone “rich and poor, free and bond to receive a mark in their right hand or in their foreheads…no man might buy or sell, save he had the mark [of the beast] or the name of the beast, or the number of his name.” This prophecy foresaw the modern digital age because this kind of global financial monitoring and control in real time could not exist without a digitally-interlinked global system first coming into being. Consider the biblical wording that this identifying “mark” will be linked to everyone’s “hand” and “forehead.” When he wrote the book of Revelation, the Apostle John was merely an observer, writing down what he saw and heard in this long vision of the end-times (Revelation 1:2). Consider the “Smile to Pay” digital payment system already being implemented in China.  In this system you use the smart phone in your hand and it utilizes the image of your face via facial recognition systems to enable you to make a financial transaction. Perhaps this is the type of mobile payments system that John was observing in his vision of our modern times. John had no words in his ancient, low-tech language to describe what he saw. John did a rather good job of describing modern tanks, warplanes and attack helicopters in Revelation 9, but his vision of financial transactions in the end times is more cryptic and open to several interpretations. What John did make clear was that it would involve your “hands” and “forehead” (or face). Perhaps the beast’s global financial “mark” will prove to be nothing more complicated than the beast system issuing new “smart phones” to everyone that are preloaded with facial recognition technologies and wired to all your financial accounts. Perhaps John saw in his vision an entire globe of people holding a device in their hands which they would turn toward their forehead/face in order to make purchases. If so, few will notice that Revelation 13’s prophecy is being fulfilled in such an action, but I urge you to keep this possibility in mind as we progress deeper into the end times. If this proves to be the “mark” of the beast system, it is already being field-tested and perfected in China. Once they have the “bugs” out of it, all the world governments will need to mandate this new cashless, financial-purchasing system will be a really big global crisis to create the “need” for it. The fulfillment of the prophecy in Revelation 17-18 will be plenty big enough to implement a new global financial system to implement the prophecy of Revelation 13.

For more in-depth information about above topics, please read my articles, Are We Living in the Biblical Latter Days? and Is Babylon the Great about to Fall…Ushering in a New Beast System?

Finally, I urge you to consider this closing thought. We are already very close to having globally-interlinked, digital technologies to monitor everything everyone does. Once this is accomplished, it is only one small step to transform the system from one which monitors everyone to one which controls everyone. Consider the implications of such a global system.