WILL TURKEY KEEP FINLAND AND SWEDEN OUT OF NATO? 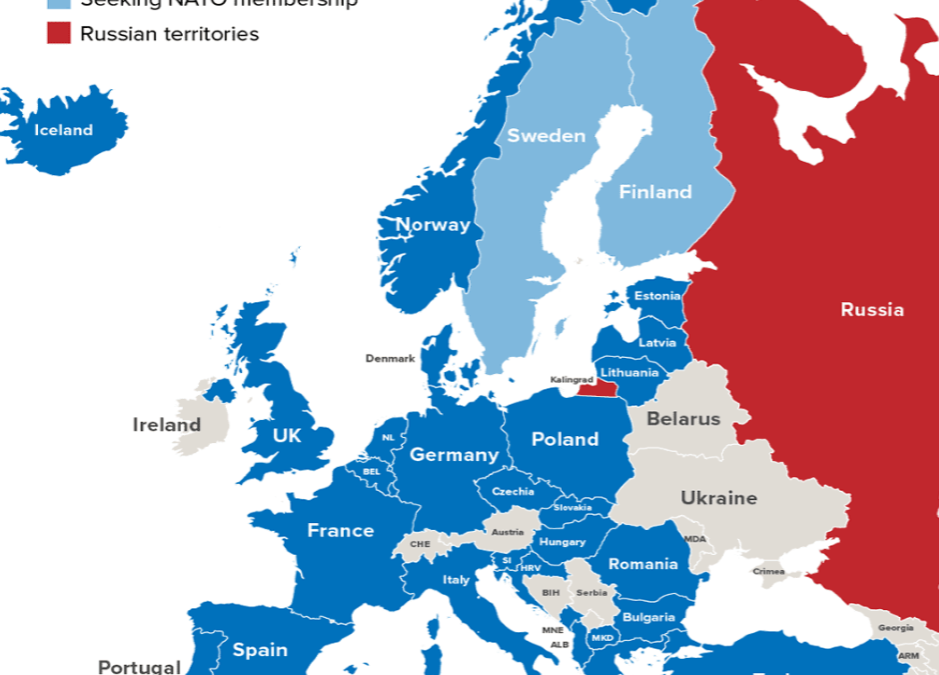 Just as it seemed that Finland and Sweden were on the brink of being expedited as new NATO members (first link), Turkey has thrown a wrench into the plans…or has it? As it became apparent that Sweden and Finland were very serious about applying for NATO membership, there were initial rumblings that Turkey might oppose their membership inspirations. That is important as Turkey is a NATO member and all new applicants to NATO must have unanimous approval of all current members to join the organization. After the initial rumblings that Turkey would oppose their membership, the news out of Istanbul was that Turkey would not oppose these two nations becoming NATO members. The second link reported that “a spokesperson for President Recep Tayyip Erdogan walked back any challenge saying that Turkey was merely trying to ensure that all alliance members’ security concerns were heeded.” All then seemed well…until Turkey’s official position switched again.

Turkey’s latest position is that Turkey will oppose the applications of Sweden and Finland to join NATO (third link). Ostensibly, Turkey is saying these nations don’t do enough to oppose a Kurdish group in Eastern Turkey that Turkey calls terrorists. This would seem to be a very minor issue given that Finland and Sweden have merely given asylum to refugees from Kurdish, Syrian and Iraqi conflict zones, and Finland and Sweden do not give any aid to this fringe Kurdish group in Eastern Turkey. I think something much deeper is at stake in this matter.

For years, Turkey has wanted to join the EU, but the EU has refused to admit Turkey (fourth link, fifth link). Reasons offered or suggested include objections that Turkey is too autocratic or that traditionally Christian Europe doesn’t want Islamic Turkey “in the club.” Since Erdogan in the past has threatened to dump the Mideast’s refugees into the EU nations, the EU has had a reasonable concern, because Turkey could legally do this if it was a full EU member. Turkey has also recently been acting as an unreliable NATO member by cozying up to Russia when it bought a Russian-built air defense system instead of a Western-built one in recent years. Why did Turkey buy a Russian system that was designed to shoot down NATO warplanes?

There is no doubt that Finland and Sweden very much want to join NATO and that the NATO nations very much want them to join. I don’t think Turkey actually objects to Finland and Sweden joining NATO, but it is angling to get a deal where European nations agree to let Sweden and Finland join NATO if Turkey is allowed to finally join the EU. Since many European nations are in both NATO and the EU, this type of quid pro quo could easily be Erdogan’s goal. He is in a good position to bargain his way into the EU in exchange for letting Finland and Sweden into NATO. However, Erdogan could also overplay his hand on this matter.

Turkey’s membership in NATO had already been placed into a de facto probationary status when Turkey bought the latest Russian air defense system–linking Turkey’s air defense system into Russian technology instead of NATO technology. It brought up legitimate concerns about “whose side is Turkey on?” Erdogan runs the risk of being isolated to a high degree if he opposes Finland and Sweden as new NATO members. Indeed, it begs the question: Can NATO members suspend or expel a member nation which has become an obstacle to NATO’s security situation? I don’t know if this is possible under the language of the NATO Charter. However, if Turkey’s opposition remains firm, NATO may change its Charter language to make it possible. Finland and Sweden already have their military forces closely allied to NATO military forces as much as possible without being formal NATO members.  It may be possible for NATO nations to create an amendment to the NATO Charter that creates a new “Temporary Associate Member” status for nations close to NATO (or similar language) wherein this status could be conferred on nations via a 2/3rds majority instead of by unanimous vote. Finland and Sweden could be given a status like this until Turkey no longer objects to them as members.

For students of biblical history who know which modern nations are descended from ancient biblical nations and tribes, there is an applicable biblical narrative that is consistent with what is now happening in this matter. Genesis 25:20-28 describes the twin birth of Jacob and Esau to their parents, Isaac and Rebekah. Later in life, these two became rivals when Esau “sold his birthright” for a pot of soup or stew that Jacob had made (Genesis 25:29-34). This was the expansive birthright that God had given to Abraham which had been passed on to Isaac. Before Isaac died, the birthright was, indeed, officially transferred to Jacob instead of Esau via some trickery concocted by Rebekah and Jacob (Genesis 27). Esau became infuriated and Rebekah sent Jacob away to her relatives to keep him from being murdered by Esau (Genesis 27:41-46). Jacob became wealthy during a long absence, and was reconciled to Esau when he returned to his family area (Genesis 33). However, over time, Jacob’s and Esau’s descendants have had a love-hate relationship, sometime being allies and other times enemies. The twelve tribes of Israel were born to the man Israel, who had been named Jacob (Genesis 32:24-32). The tribes of Israel later split into the northern kingdom of Israel and the southern kingdom of Judah, from which we derive the name “Jew.” After all the tribes went into exile from the Promised Land, the tribe of Joseph still retained the very generous birthright blessings (Amos 1:6-10) which had been given to Ephraim and Manasseh–Joseph’s sons (Genesis 48:8-22). Therefore, the modern descendants of Ephraim and Manasseh still possess the birthright blessing to this day, and Genesis 49 and Revelation 7:1-8 prophesied that all the tribes of Israel would be present among the nations in the “latter days” of our age. Obviously, one cannot possibly understand biblical prophecy accurately until one first identifies the modern ten tribes among the nations. My books, available at the home page of this website, trace the history of all the tribes and identify them among the modern nations today. Ephraim and Manasseh are identified in my articles (sixth link, seventh link).

Later in Esau’s life, his name became Edom (Genesis 36:1), and he gave birth to several sons whose descendants became clans. One of the prominent clans of Edom was named after Teman, one of Edom’s sons. Indeed, Genesis 36:34 infers that the entire land of Edom was once known as the “land of Temani.” Ancient languages generally didn’t write vowels, so we trace consonants to look for historical connections. In recent centuries, the consonants T-M-N were long associated with the Ottoman Empire, which had the consonants T-MM-N. In my writings, I identify modern Turkey as the Primary modern nation of Edom. Under President Erdogan’s polices, Edom has become a thorn in the side of the modern Israelite tribes descended from Jacob/Israel. They are allies in NATO, but Turkey is not acting like an ally all the time. This begs the question; will Turkey stay in NATO as an ally of the modern European nations which include many of the modern tribes of Israel (as my books abundantly document).

Ezekiel 38:1-6 gives us a divinely-written “script” which tells us which modern nations will be in the “Gog-Magog” alliance which will launch a surprise attack vs. the modern nations of the ten tribes of “Israel” and their allies in the latter days. It is noteworthy that not a single nation or tribe descended from Abraham is included in that final Gog-Magog alliance. Since Edom/Esau is a prominent member of the many nations descended from Abraham, it would seem logical that they would have been included in this list if they were destined to be in it. The Gog-Magog alliance is lead by Russia and includes Iran and China. Turkey is currently oscillating somewhat between Russia and NATO in its allegiance, but the fact that they are not in the Ezekiel 38:1-6 list of nations in the Gog-Magog alliance infers that Turkey will remain in NATO. I hope that turns out to be the case. In the current circumstances, I think Turkey is trying to get a better deal for itself vis-à-vis the EU by delaying the admittance of Sweden and Finland into NATO as leverage. That is my expectation, but I make no specific predictions about how this will unfold.