Will There Be an “EU Army” or a German-Led European Army Soon? 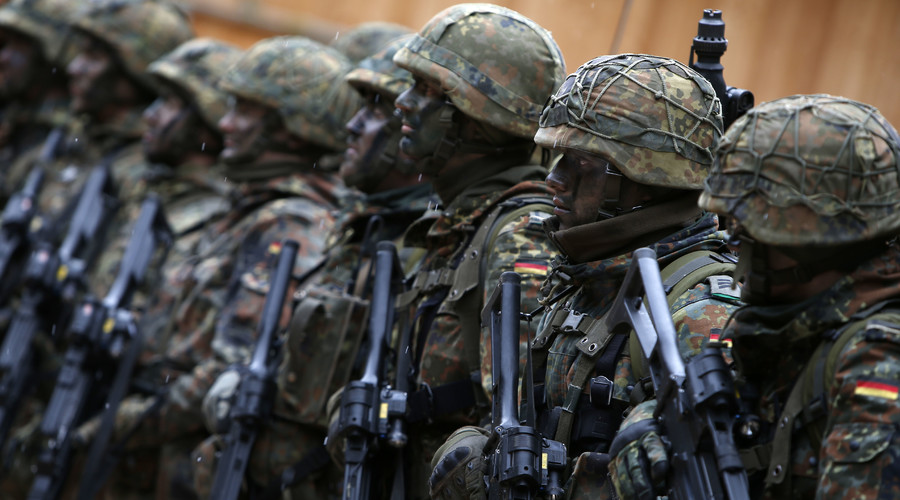 There is an ominous development inside Europe to which few Americans are paying any attention. In the aftermath of the United Kingdom’s Brexit vote to leave the EU, there are forces working to create an EU army which, apparently, would have a command structure outside of the NATO framework (i.e. outside of American control), which justly concerns the NATO leadership. The first link details these developments and you may be surprised to learn that Germany, France and Italy (three major European members of NATO) seem to be leading this effort. It is a well-documented fact that the European members of NATO have allowed their militaries to atrophy badly. The USA is the only nation in NATO to have a dominating military force, and, since the UK was the major military power within the EU, its departure will leave the EU denuded of military strength. Nature seems to “abhor a vacuum,” as the old saying goes. European military strength and military leadership are vacuums that are waiting to be filled, it would seem. Germany is the dominant economic and political power within the EU, so it is logical that it would seek to become the dominant military power as well.

The second link reports that if the EU takes too long to form an army, Germany may take it upon itself to form a European military force out of (if I may borrow a phrase that has already been coined) “a coalition of the willing” within the EU that would function outside the formal EU structures. Obviously, if Germany took such an action, it would lead this new military coalition. The second link is from the Russian media, and, given the millions of Russians who died fighting the Germans in World War II, you can be sure Russia will be watching any such military actions by Germany with a hawk’s eye. If Germany led a subgroup of European nations to form their own military force not aligned with either NATO or the EU, it would lead to a very confusing military situation inside Europe. Which nations and which leaders would be loyal to the NATO command structure first? Which would be loyal to an EU-dominated structure first, and which would be primarily loyal to a German-led subgroup? This sounds like a formula for the possible disintegration of either NATO, the EU or both.

The third link pertains to internal German matters, but it has a tidbit of information I thought well-worth passing on to readers. If you scroll down as you read the article, it includes a photo of current German Chancellor. Angela Merkel, in her younger days. It reveals that Merkel was the “Deputy Spokesperson [for] the last leader of East Germany” at the very end of the East German nation’s existence. In that position, Merkel worked closely with the leadership of the Communist East German government, including the East German Secret Police, the Stasi. The East German Stasi was allied with Russia’s KGB. A young KGB major named Vladimir Putin was stationed in Germany at the time East Germany fell (fourth link) and when Merkel was Deputy Spokesperson for East Germany’s last Communist leader. Did Merkel and Putin know each other then? Putin and Merkel have a “complex” relationship as the fifth link examines. Why is Merkel persisting in her policy of admitting huge waves of Islamic immigrants into European nations within the EU even though it has to be obvious to her that they are a divisive force which is endangering and fracturing European nations and the EU? I’m getting the feeling that there may be more here than meets the eyes at first glance. The ferment inside Europe bears close watching, as I think many followers of biblical prophecy would agree.

We know from Revelation 17 that the beast power will form when it overthrows the current global power structure of the world which is called “Babylon the Great” in the prophecy of Revelation 17-18. Revelation 17:7-16 reveal that the final beast power will be put into place by the concerted actions of a mysterious alliance called the “seven heads and ten horns” It seems likely (but not certain) that these heads and horns represent nations. The EU has far too many nations in it to fit into any description of “seven nations” or “ten nations” acting together to overthrow the current world order. However, if the EU splinters and the European nations realign themselves into new military/political/economic alliances, I suggest that we watch closely to see if any successor European entities are formed by groups of either seven or ten nations. The reality of European nations today may not be the reality of the Europe of tomorrow. The exit of the UK from the EU, possible future exits from the EU by other nations, and the ever-growing crisis of Islamic immigration into Europe could tear the EU apart. What may emerge is something no one yet knows for sure.

Given the current weak status of European military forces, any new EU military force or German-led European military force will take some time to assemble and build into a formidable force. Russia has historic reasons to fear any kind of European re-armament movement under German leadership. If such a development occurs in the future and Russia strangely manifests no major concern about it, remember that Putin and Merkel used to be allied in 1989-90 when both worked for the former Communist governments of the Soviet Union and East Germany. Hmm. Maybe there were a number of unpublicized reasons why the NSA was spying on Angela Merkel’s personal cell phone not long ago (last link).

My thanks to a reader for alerting me to this development.