Will the Zika Virus Become a Biblical Plague? 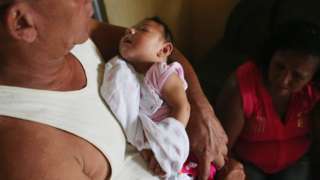 The Zika virus, which is spreading rapidly throughout the Latin American and Caribbean region, has now been declared a “global emergency” by the World Health Organization (WHO). The first link describes the nature of this WHO declaration and offers updates about the plague and where it is now present. The second link contains a map of the nations, territories and islands where the Zika virus is now actively spreading. The third link lists the 12-13 states in the USA in which approximately 30 people have already contracted the Zika virus. As the third link makes clear, it is important to note that the Americans who have contracted the Zika virus are not “actively spreading” the virus–they can’t do so unless they are bitten by mosquitoes who transmit it to other people and, thankfully, the USA, Canada and northern nations are in our winter months with few or no mosquitoes at present. Infected Americans contracted Zika from visits to nations and regions in which the Zika virus is actively spreading. Appropriate travel advice and warnings from the CDC is contained in the fourth link. Maps showing the 22 nations, territories, etc. in which the Zika virus is actively spreading can be found in the first four links or in any web search for updates.

Most people who contract the Zika virus will either have typical virus symptoms or will not know they have contracted it. However, a person who has contracted the virus can still spread it to others if they are bitten by mosquitoes which can then pass on the disease to other people that it bites. This virus is particularly scary as it can cause microcephaly (unusually small heads and brains) in babies born to infected mothers. It can also cause a rare paralytic disease called Guillaume-Barre Syndrome. The WHO emergency alert puts the Zika virus “in the same category as Ebola” according to the first link. Brazil seems to be the hardest hit nation with perhaps as many as 1,500,000 people already contracting the virus and having about 4,000 about confirmed cases of microcephaly among newborns (fifth link). In the sixth link, the WHO estimates that there will be 3-4 million infections in the Americas just this year. As a personal observation, I expect the number of infections could be much higher that that estimate as there is no vaccine and it is spreading in many nations which have low-budget mosquito-control programs. Brazil alone is already halfway to the estimated total 3 million infections in just that one nation, and we have not yet even begun the active mosquito season in the Northern Hemisphere.

The situation has become so severe in some nations that they are asking females not to get pregnant. The seventh link reports that Colombia, Jamaica and Honduras have asked females not to get pregnant at this time and that El Salvador has taken the extreme step of recommending its females not get pregnant until at least 2018. This disease is heartbreaking as it will sentence each child born with microcephaly to an afflicted life and most families will not be able to afford for specialized care for these afflicted babies. This will likely place the burden of caring for an ever-growing number of afflicted babies on poor nations which have no budget to provide such care. Maybe El Salvador has seen this already and that is one reason for their extreme recommendation to avoid pregnancies.

The global warning by the WHO is appropriate. The Caribbean and Gulf of Mexico have many resorts and regions which are international tourist destinations reached via airplanes and cruise ships, areas where the Zika virus is active. People from Europe, Asia, Africa and North America who visit the infected regions will inevitably have a percentage of their numbers contract the disease and they can carry it back to their home nations where they can become active carriers of the Zika virus as soon as warm weather reaches the Northern Hemisphere. This could even become an issue in the US presidential campaign. On the Republican side, there is much sentiment for “building a wall” along the US-Mexican border to halt illegal immigration with the leader in current GOP polls, Donald Trump, being the primary advocate of such action. It is common knowledge that the vast majority of illegal immigrants inside the USA are from Latin America–nations hit hardest by the Zika virus. How many illegal immigrants will be carrying the Zika virus into the USA across its porous southern border this year? The Zika virus will also surely have economic effects if it continues to spread and tourist locations in hard-hit nations and regions experience diminished tourist traffic. The availability of widespread airline travel enables the virus to spread quickly all over the world and rapidly expand the number of infected persons and infected but asymptomatic carriers of the virus. I see a major problem looming on the horizon. The 2016 Olympic Games will be held in Brazil, the nation most affected by the Zika virus outbreak. Those who attend the games could carry the virus, literally, everywhere in the world. The Brazilian government already appreciates the severity of the threat and has taken the draconian step of allowing health officials to enter any building as part of mosquito-eradication efforts (last link).

Currently the most effective way to avoid the virus is to not travel to infected areas. The most effective means of slowing the spread of the Zika virus would seem to be obvious: aggressive mosquito-control programs in all nations and regions which host the types of mosquitoes which transmit the virus. Unknown at this time is whether the virus can mutate and eventually be spread by other types of mosquitoes or biting insects. Given that this is a threat to all nations on the planet, richer nations will have little choice but to help poorer nations in their mosquito-eradication efforts to slow the spread of this disease.

In Matthew 24:6, Jesus Christ prophesied that “pestilences” would be one of the global signs that the latter days of this age had arrived and that his Second Coming was growing near. There have been some “false alarms” about global pestilences that were initially thought to pose imminent global threats (swine flu, bird flu, etc.). However, this Zika virus “pestilence” appears to be a real threat to be a truly global “pestilence.” Not only can it spread insidiously to uninfected people via large numbers of infected people who are symptom-free, but it is already spreading at an “explosive” rate (as some media reports have reported) in nations and regions where mosquitoes are very common. As spring and summer come to the Northern Hemisphere and mosquitoes hatch by the billions throughout northern nations, how many mosquitoes will acquire the Zika virus and spread it to other people? The very thought of this rapidly-spreading threat ought to move northern nations to start very aggressive mosquito-control programs early in the mosquito season!

There is another biblical scripture which, I think, needs to be considered. When God made a Covenant with the ancient Israelites via Moses, one of the blessings that was promised for their obedience to the Creator God’s laws was that their children (offspring) would be blessed (healthy). This promise is found in Deuteronomy 28:4 and 11. While modern nations (with the possible exception of the Israelis where observant Jews adhere to Old Covenant laws) do not have a specific “covenant” with God, the laws of God are immutable and they apply to all mankind whether they know about or observe the laws of God or not. Mankind has been increasingly disobedient to God’s laws in the recent decades which coincide with our entering the “latter days” of this last “Age” of mankind’s self-government on earth before Jesus Christ returns to impose Divine rule on all nations (Micah 4:1-5, Zechariah 14:16-20, Revelation 19:11-20:4). Are we entering a time when God’s blessings are being withdrawn from the earth as mankind becomes more openly sinful?

If any reader wonders if we are living in the prophesied latter days, I urge you to read my article, Are We Living in the Biblical Latter Days?, in which you will find abundant documentation and specific evidence that the Bible’s prophecies about the latter days have come true in our modern times. Let’s be blunt: The Zika virus is particularly threatening as it has the potential to doom many members of the next generation to an existence with no hope of a normal life if their mothers contract the Zika virus while pregnant. El Salvador has seen this stark danger and urged females not to get pregnant for at least two years. How long will it be till other nations issue similar instructions to their citizens? If more nations start issuing similar warnings against pregnancies, we will truly have a global “pestilence.”

As a practical matter, we all need to be very diligent to do whatever we can to stop mosquitoes from breeding. Everyone who owns property needs to do everything they can to eliminate mosquito-breeding areas (discarded tires that accumulate stagnant water after a rain, basins, ponds and pools, etc.). I urge all property-owners to consult with their local health departments to learn what you can do to help stop the spread of mosquitoes on your property. The Zika virus is an “equal-opportunity” threat: the richest people on earth can easily be infected with the Zika virus from the poorest workers at the resorts that the rich people frequent. In the effort to stem the advance of the Zika virus, we all really are “our brother’s keepers.”