Will the EU Collapse Next Year? 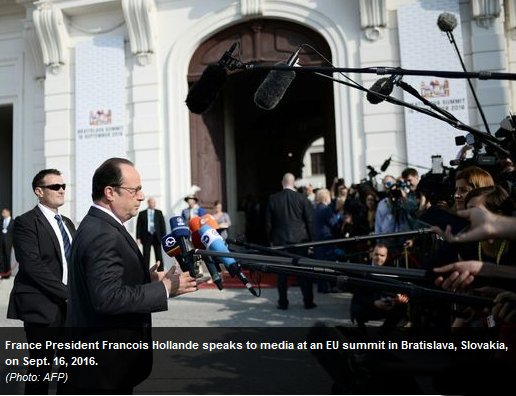 The EU may be in more serious trouble than we realized. At the recent EU conference in Bratislava, Slovakia, even the leaders of the nations within the EU were pessimistic about its future. The first link reports that even the leaders of EU nations warn that the EU has “six months” to make the necessary changes to “revitalize confidence and unity.” That is a short time frame. I think the EU’s leaders are still stunned that the UK really did vote to leave the UK. Technically, the UK has not yet invoked Rule 50 of the EU Charter which sets in motion a process that must result in its exit from the EU within two years or less.

The first link mentions some of the internal divisions within the EU, but the second link is more informative about how intense these internal divisions are becoming. The first link does acknowledge that “unprecedented division” is now present within the EU and comments on the irreconcilable divisions between Germany and other nations such as Hungary regarding the immigration issue. It also mentions the “squabbles” over the possible creation of an “EU army.” It is my understanding that virtually all major decisions within the EU have to be made via a unanimous vote of its member nations. If this is so, it is hard to see any EU army being formed any time soon as the nations are, no doubt, deeply divided over its potential leadership, deployment, and numbers. Given the history of World War II, I’m sure many European nations do not want any German leadership of any European army. Indeed, the EU member nations have military forces that are now so weak and atrophied that they need to build up their own armies before contributing any troops to an EU army.

The second link details just how rancorous the internal divisions are growing among the EU nations’ leaders. It reports that Italian Prime Minister Renzi stated “Germany does not respect the rules,” and refused to even appear on the same stage as the German and French leaders. It adds Hungary’s leader denounced Germany for its “naive” policies on immigration. This is just a sample of what is being reported publicly about the EU’s internal fractures. Imagine what was said behind closed doors! The second link also reports that the new UK Prime Minister, Theresa May, is expected to invoke the EU’s Rule 50 in January or February of 2017, starting the formal exit process for the UK from the EU. The process can take up to two years, but given the growing fractures within the EU, the EU itself may not last two more years. If the EU disintegrates or has to reform with just a few members remaining in it, think of the huge financial ramifications this will have for the global markets if the Eurozone disintegrates or is in doubt of survival. What will happen to all the trade deals and debt issuances if the nations now in the Eurozone no longer support the Euro itself?

The EU faces electoral threats to its cohesion in the near term, as well. A previous post asked readers to mark October 2 on their calendars. That is the date when Hungary will vote whether to empower its national leaders to ignore the immigration mandates of the EU bureaucrats, and on which Austria will decide whether to elect an anti-EU, anti-immigrant candidate as its new president. If the Hungarian voters empower its leaders to ignore EU mandates, Hungary will essentially be within the EU in name only. Other important elections are also pending. Early in 2017, the Netherlands will hold a national election and current polls indicate an anti-EU candidate, Geert Wilders, will be elected as the nation’s new leader. It is widely expected that he will ask Dutch voters to also vote on their own national version of the British Brexit vote to have the Netherlands join the British in leaving the EU (third link). The French will also hold a national election next year, and one of the leading candidates, Marine Le Pen, is anti-EU and anti-immigrant, and she is committed to holding a French “Frexit” vote referendum on whether to also leave the EU (fourth link).

There is another dynamic in the EU’s struggles that is rarely discussed in media articles. Many European nations are members of both NATO and the EU. The NATO organization is a military alliance that is dominated and led by the USA with the European nuclear powers, the UK and France, in the major supporting roles. The EU is an economic/political alliance that is at least attempting to become a military power as well via its own army. This has the potential to put NATO and the EU on a collision course in terms of the European nations’ loyalties. The more that the EU fractures, the more important and relevant NATO becomes. If the US-led NATO alliance becomes the dominant and most reliable alliance in Europe’s future, then the USA could be resurgent on the global scene if it elects a new forceful president like Donald Trump. Remember that the USA is dominant within NATO while Germany is dominant within the EU. Many European nations will be faced with the question: Do they want to be under American leadership or German dominance? The memories of World War II will make that an easy question to answer for many European nations.

Any way you look at it, the EU, as now constituted, is in danger of coming apart. This could have remarkable consequences on the global scene and could easily have many ramifications from a biblical prophetic viewpoint. The emergence of new blocs within a reorganized Europe could change our perceptions of how biblical prophecies will be fulfilled, so this situation bears close watching.