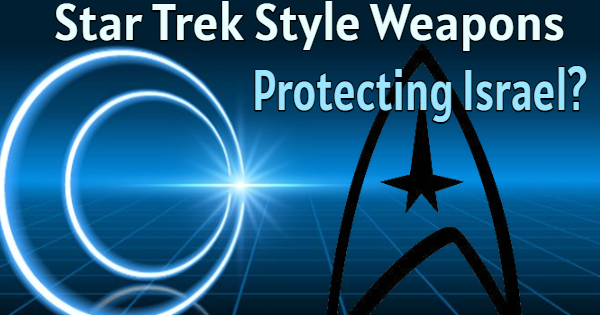 Recent media articles are revealing that very high-tech technologies akin to those in the Star Trek movies and television shows may soon be implemented in the Israeli and American military services. What has been revealed is most interesting, and what is even more interesting are some of the follow-on questions for which answers have not yet been revealed. This post will address both what is known as factual and what may be factual but not yet publicly revealed. Let’s first look at a new Israeli technology that we know is being developed and deployed.

It has been known for years that the Israelis have one of the best air defense networks anywhere in the world with their Iron Dome and David’s Sling air defense systems. These systems are able to shoot down a large number of rockets, mortars, missiles, etc. that could be fired at Israeli targets. The limitation of those systems is, of course, that sooner or later one runs out of ammunition (i.e. kinetic interceptors) to shoot down incoming missiles and rockets. With Hezbollah possessing perhaps 100,000 rockets and missiles and Iran having numerous missiles aimed at Israel, how many rockets and missiles can Israel intercept before it runs out of ammunition for its high-tech defenses? In a stunning development, the Israelis are on the cusp of solving this problem. The Israelis are in the process of perfecting and deploying an air defense system that utilizes lasers and electromagnetic energy fields to destroy incoming armaments. The first link reveals that the Israeli Defense Ministry has proclaimed that “the laser age is underway” as it is preparing to deploy laser weapons to shoot down incoming projectiles. Please notice that the illustration of the new electromagnetic energy defense system at the first link also shows an energy field or “shield” protecting Israeli armored vehicles from aerial attacks. This is something beyond a mere laser weapon that is a directed beam that can be aimed at an individual incoming weapon. It shows an energy field that acts as a protective “shield” for friendly forces on the battlefield. The second link also depicts the new system as being two-fold in its application. It depicts a laser-beam being fired from a new weapon, and it also (like the first link) shows the new “Laser-based defense system” will generate a shield-like bubble that can protect friendly forces inside a protected zone. It asserts the new Israeli system will feature “endless munition” generated by a power source that is compact enough to be deployed on trucks or similar military vehicles. In order to have “endless munition,” the system will need to be powered by a massive power source which is also very compact in order to be portable on a truck-sized chassis. Is it a small nuclear generator or some other new type of power source? That answer is not revealed.

The above links demonstrate that lasers and energy shields are soon to arrive on the battlefield. The United States may also be about to deploy a similar energy shield for its military forces–including its aircraft carriers. Indeed, the third link asserts that the USA’s aircraft carriers are already “now equipped with electromagnetic shields” which can “neutralize” the hypersonic missiles developed by Russia and China to sink aircraft carriers. It calls these new defensive energy shields “impenetrable,” and indicates that this new technology is derived from the scientific ideas of the famous inventor, Nikola Tesla. It adds this technology can be adapted to not only protect military targets like aircraft carriers but civilian populations as well. The fourth link also addresses this same new weapons system, and it reports that this new “Tesla-shield” technology was installed on US carriers in January 2017 when they were suddenly recalled to their home ports “for unknown upgrades.” I recall that event, and many lamented the fact that the US had then withdrawn all its carriers from the earth’s oceans. Various theories (some credible and some wild) were offered to explain this most unusual recall of all US carriers, but the installation of Tesla-shield technologies on all of them to defend against Russian and Chinese supersonic and hypersonic missiles would have been an extremely important step to take to protect all carriers. One wonders if such shields generate a big enough protective energy field to also shield the carrier’s escort vessels or if they are also being gradually retrofitted with such shields as well. The link likens this new energy-field defense technology to the “shields” of Star-Trek fame and observes that this new technology could also be used for a planetary defense system against asteroids and cosmic objects that might collide with earth in the future. This link includes some UFO/alien-related information, but its down-to-earth descriptions of this new weapons system should interest everyone. Over the years, I have periodically warned about the vulnerability of US carriers to Russian and Chinese hypersonic missiles in my posts so this new energy-field defensive weapons system would be most reassuring for all Americans and everyone in the Free World. It is also worth noting that such energy fields, like the Israeli anti-missile “shield” discussed above, require a huge supply of energy to generate and maintain the energy shield as well as fire laser weapons at incoming threats. The reactors of the nuclear-powered American carriers would easily provide just such a power source.

Let’s consider Nicola Tesla, a genius that was far ahead of his time. He was cursed to be an advanced theoretical scientist who lived in a rather low-tech world. Imagine what he could achieve now if he lived in our high-tech world? He was famous for proposing an electromagnetic field defense system and death-ray weapons systems very much like the energy-field defense shields and laser weapons now being developed/deployed by the Israelis and Americans. He also proposed wireless transmission of information as well as energy. He constructed a tower on Long Island that was intended to develop or at least test some of his high-tech concepts (fifth link), but it was torn down reportedly due to a lack of funding. His concept of the energy-transmission power of such a tower was forgotten…or was it? The sixth link shows that a very similar “Tesla tower” has been built near Milford, Texas, and the link offers an explanation of the energy-related concepts the tower may be pursuing (a photo of the new “Tesla tower”‘ is included with the link).

Do the above technological developments have biblical significance? Indeed, they do. Genesis 11:6-9 record that post-Flood mankind was developing advanced technologies that were not within God’s will for mankind to have at that time, and that scripture cites God as observing that mankind was developing technologies that had reached a tipping point where “nothing they imagined to do will be restrained from them.” Mankind was then simply attempting to rebuild the pre-Flood advanced technologies, and they had the ability to do it since they had pre-Flood tools, blueprints, schematics, etc. that were “how-to” manuals for high-tech designs, and in Noah’s family, they had 8 people with a combined almost 1800 years of pre-Flood life and experiences amongst them. Noah and his wife were about 600 years old each (Genesis 7:6) and each of Noah’s three sons and their wives, were about a century old when the Flood ended (Genesis 11:10). Jesus Christ is also quoted in Matthew 24:37 as prophesying the latter days of our age that would precede his Second Coming would be a mirror image of the pre-Flood world, so this affirms the pre-Flood world also had a high-tech civilization. Revelation 13:1-5 foretells that a global “beast” power will dominate the world for 42 months just before Jesus Christ returns and verse 4 foretells that this end-time beast system will unveil previously-unknown, high-tech weaponry that will amaze mankind. Verse 4 states the world will marvel at the unveiled weaponry with the words “Who is able to make war with him?” so it is clear this prophecy refers to very high-tech, war-making technology.

Star-Trek imagined a world where space-borne mankind would have flip-phone communicators, replicators, holodecks, defensive energy shields and phaser technology. Flip-phone communicators are now passé, 3-D printers are steadily developing into replicators, holographic and Virtual Reality technologies could soon produce a functioning holodeck, and the new Israeli/American energy “shield” and laser technologies are now beginning to implement Star-Trek’s “shield” and phaser technologies. Just like mankind in Genesis 11:6, modern mankind is in the process of implementing “all that it has imagined doing.” However, unlike in the time of the tower of Babel, it is now within God’s will for such high-tech developments to come into existence so he is “standing back” and letting mankind develop and implement its imaginations. When the final World War III prophesied in Ezekiel 38-39, Joel 2, Zechariah 14, Revelation 16 and 19, etc. comes to pass, it will look nothing like World War II’s technology. We only have glimpses of the high-tech weaponry now being deployed in global military forces. We, the public, are not being told about many of the high-tech weapons that are being developed secretly even now, but they will be used in World War III. World War III may look more like Star-Wars and Star-Trek battles than we can imagine. No wonder mankind will have to be divinely rescued from extinction (Matthew 24:21-22).

For convincing evidence that we live in the biblically-prophesied “latter days,” please read my article, Are We Living in the Biblical Latter-Days? For a comprehensive look at the Bible’s many prophecies about the global wars to come at the end of this age, please review my article, What Ezekiel 38-39 Reveal about a Future World War III. if you do, I think you will be amazed at how accurate the Bible’s prophesies really are!