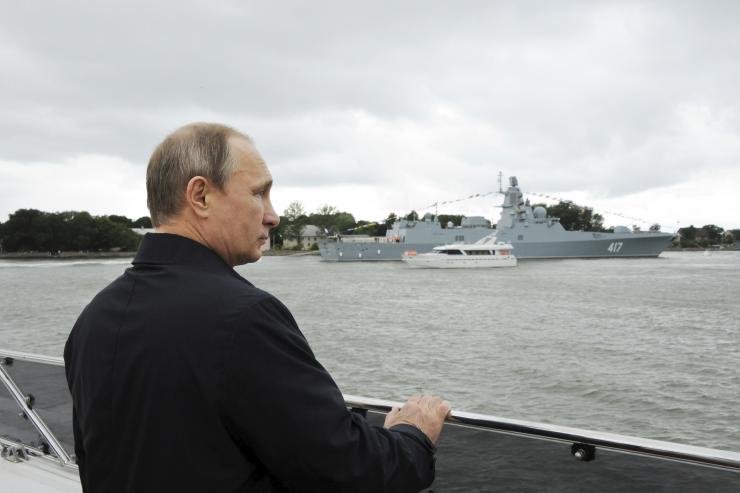 The first link and second link report that the Russian and Chinese navies held a large joint naval exercise this month. That is, of itself, hardly surprising since they are strategic allies. The important fact is the location of the naval exercise. This maritime saber rattling was conducted in the Sea of Japan, reportedly within 250 miles of the Japanese home islands. Was this military maneuver intended to intimidate Japan into taking a more passive role toward the developing Russo-Chinese axis? If so, I think it will backfire. Japan is led by Prime Minister Abe, who has a record of being an ardent Japanese nationalist and an advocate for Japanese military growth. I think the Russo-Chinese naval exercise will only stimulate Prime Minister Abe to intensify efforts to re-arm Japan as this maritime military exercise so close to Japan only makes the Russo-Chinese threat more obvious and undeniable. How would Americans feel if the Russian and Chinese navies held a large military exercise just 250 miles off the coast of California?

This is not the first Russo-Chinese naval exercise which was important due to its chosen location. In May 2015, the Russian and Chinese navies held a joint military exercise in the Mediterranean Sea, just off the southern shores of European NATO nations (third link). Were Russia and China then sending a message to the nations of Europe which were already intimidated by the Russian incursion into Eastern Ukraine and the Russian seizure of the Crimea? I think that Russia and China’s message to European NATO nations was clear enough.

Japan and India form the northern and southern edges of a growing alliance of Asian/Pacific Rim nations which all are threatened by Chinese militarism. China’s strange and indefensible assertion of sovereignty over virtually the whole of the South China Sea and China’s rapid building of artificial islands in the South China Sea on which they are building military bases and airfields increasingly threatens the other Pacific and Asian nations. The list of nations threatened by China in the Pacific Rim includes South Korea, Taiwan, the Philippines, Singapore, Vietnam, Malaysia, etc. Indonesia has joined the list of nations feeling threatened by China’s overt militarism. The fourth link reports on a joint military maneuver conducted by the US and Indonesian navies in the South China Sea region. It also reports such joint maneuvers may become regular, and that Indonesia will upgrade a military base near the disputed region of the South China Sea.

Japan is still building up its military forces as well. The fifth link reports Japan has just launched its second in a new class of 24,000 ton helicopter carriers to add to the previous two smaller helicopter carriers it already had. The link reports that the new carriers are intended to base about 14 helicopters. That seems to be buying very little “bang for the buck,” in my opinion. I wonder what else they can or will do. Will Japan eventually be able to launch long-range cruise missiles from these vessels? That would be a logical mission, as they will be defending the Japanese home islands which are very close to China. They are certainly big enough to carry many such missiles. Will Japan eventually base VSTOL fighter warplanes from their decks as has been speculated? We will see as the future unfolds. My own opinion is that these new large Japanese naval flat-tops will be equipped to do far more than just base a few helicopters. Also of interest is the very warlike name given to the new Japanese carrier. It is called the Kaga, which historically minded readers will recognize as the name of a previous Japanese carrier which attacked Pearl Harbor and was sunk at the battle of Midway. Will their next carrier be called the Akagi?

As long-time readers of this blog already know, I believe that the biblical prophecy of Ezekiel 38 specifically foretold (over 2500 years ago) the formation of this anti-Chinese, Pacific Rim alliance in our time, called the “latter days” of this current age. For a discussion of the evidence that Ezekiel’s prophecy foretold this alliance, please read my articles, Japan’s Role in Biblical Prophecy and What Ezekiel 38-39 Reveals about a Future World War III. To connect these articles to America’s role in modern events, I also suggest reading my article, The USA in Bible Prophecy. The fact that modern geopolitical trends continue to fulfill the prophecy of Ezekiel 38 can only mean that Ezekiel’s prophecy was inspired by a Divine Creator who is mindfully aware of his prophecies and is fulfilling them right on time, according to his will and schedule–something he promised in Isaiah 41:21-26 to do.