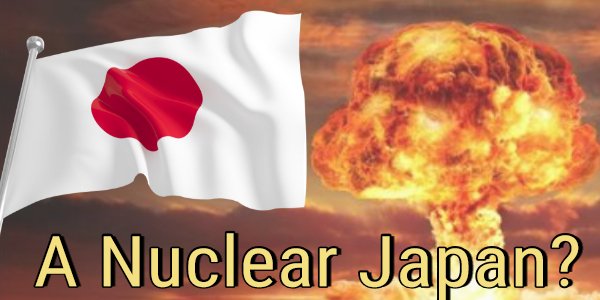 This post is to offer a current perspective on Japan’s ability to build nuclear weapons for its own military arsenal, and also to provide readers with an interesting insight into the status of the Axis nuclear programs at the end of World War II.

The first link provides a detailed insight into the current state of Japanese abilities and intentions to build nuclear weapons. It asserts that Japan has enough plutonium stockpiled to build “6,000 nuclear weapons.” If Japan decided to build nuclear weapons, that stockpile of plutonium would enable it to be among the foremost global nuclear powers in a very short period of time. There is no question Japan has the technology and expertise to make nuclear weaponry, so the real question is whether Japan intends to build them. The answer, at present, appears to be “no,” but very pressing realities may motivate Japan to soon build them. Japan is directly threatened by China’s growing stockpile of nuclear weapons which stand behind China’s massive inventory of new conventional weaponry. Also, Japan is very much threatened by the fact that North Korea also has nuclear weapons which can reach Japan by missile within mere minutes. Currently, Japan can trust that it is secure under the “nuclear shield” provided to it by the USA. However, if a Leftist Democrat is ever elected as the president of the USA, Japan may have no choice but to “go nuclear.” Leftists traditionally are anti-military and would be unreliable as guarantors of the American “nuclear shield” protecting Japan. It may be that having a conservative, pro-military president in the White House is the only thing preventing Japan from rapidly building its own nuclear weapons from its immense plutonium stockpile. The first link also notes that Japan’s Constitution does not specifically forbid Japan from possessing nuclear weapons. North Korea’s unstable status could also move Japan at any time to build its own nuclear deterrent to prevent a North Korean nuclear attack on Japan. North Korea’s possession of nuclear weapons puts China in a risky position. If China allows North Korea to retain nuclear weapons, it may have to accept Japan building its own nuclear arsenal–a reality China does not want to see happen.

The first link also offers a little-known factoid about the status of the nuclear weapons programs of Germany and Japan–the World War II Axis powers. Germany did have a nuclear weapons program which (thankfully) did not produce a workable weapon. However, just before Germany surrendered, it sent 560 kilograms of uranium oxide to Japan via U-boat so Japan could carry on a nuclear weapons development program of its own. Again, thankfully, the German U-boat captain learned about Germany’s surrender and yielded his U-boat and its radioactive cargo to the Allies before it reached Japan. This vignette from the closing days of World War II reveals that Japan was preparing to build a nuclear bomb with the radioactive material being sent to them by Germany when the war suddenly ended after the USA dropped nuclear weapons on Hiroshima and Nagasaki.

The second link states that Japan has a stockpile of plutonium totaling “47 tons”–equal to 94,000 pounds of this weapons-grade element. It is not clear whether the plutonium being stored by Japan is in a current condition to quickly be placed in the warheads of nuclear weapons. Japan has stated an intention to reduce its stockpile of plutonium, but by what amount and by what date is rather murky. What other purpose, could the plutonium have? Plutonium does not have much use except as fuel for nuclear weapons. It does appear that Japan has accumulated its plutonium reserves as an “insurance policy” in the event that the USA ever has a president who is either not a reliable ally of Japan or is part of an anti-nuclear political movement.

According to my understanding, Japan does have a stated role to play in latter-day fulfillment of biblical prophecy.  For a detailed examination of that role, please read my free articles, Japan’s Role in Biblical Prophecy, What Ezekiel 38-39 Reveal about a Future World War III, The USA in Bible Prophecy and Are We Living in the Biblical Latter Days? These articles will address the broad range of biblical latter-day prophecies, not just Japan’s role in them.