WILL HOLOGRAMS BE “THE IMAGE” OF THE BEAST? 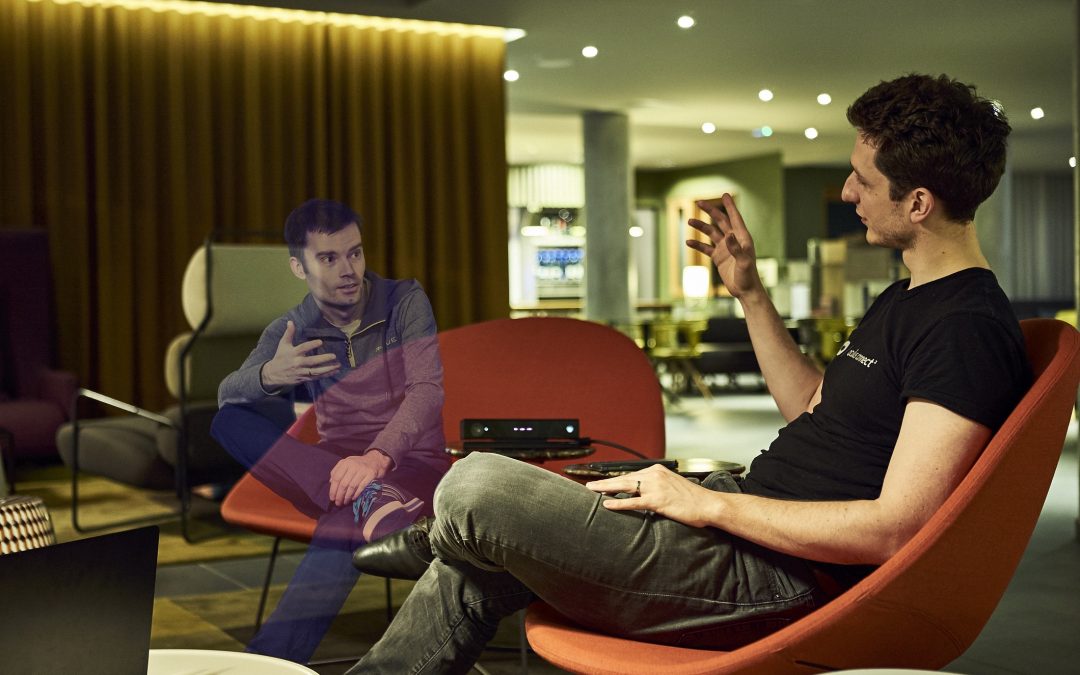 Before looking at those advancements, let us remember the limitations that were upon the Apostle John, who wrote down the revelations he saw and heard as they occurred in his visions (Revelation 1:19). John lived near the end of the 1st century AD when he received his visions, so he had a vocabulary that had zero words to describe latter-day, high-tech weaponry and technologies. He had to do the best he could in describing modern phenomena with the very primitive words that he had in his language at the time. Many have seen in Revelation that John did a fairly good job of describing modern warplanes and attack helicopters in Revelation 9:7-9 as he tried to describe the metal-clad, flying weaponry he saw which had very loud wings, men’s faces in gleaming cockpits and tails like scorpions (upraised vertical stabilizers). The “horses” of Revelation 9:17 had breastplates (armor-plating) and fire and smoke issued from their “mouths” (language describing tanks firing cannon shells which results in fire and smoke enveloping the front or “head” of the armored “horse” he saw.) John did as good as he could in describing a futuristic modern battlefield for which he had no words at all. I discussed holographic possibilities in the fulfillment of biblical prophecies in a previous post (first link), and I refer readers to that post for some very detailed information about the modern state of holographic technologies. I won’t repeat the background information of that previous post here as I want to focus on a new revelation about holographic technology and what it portends for prophetic fulfillments.

Let us begin by examining what is known about new, cutting-edge holographic developments. With so many in-person meeting opportunities forbidden or impractical in the Covid-19 lock-downs, Zoom meetings are ubiquitous. However, holographic technologies are advancing to permit 3-D holographic meetings instead of 2-D meetings via Zoom (second link). These new technologies are “unlocking ways to use laptops, computers and smartphones to engage with and stream holograms emitted elsewhere.” Did you notice in that statement that even “smartphones” will eventually be able to transmit a holographic image of a person (or persons) talking to you? The second link adds that such a 3-D holographic technology is expected to be commercially available later in 2021. In the April 11, 2021 issue of the Minneapolis Star-Tribune, there was an article entitled Holograms could be the new Zoom” by Dalvin Brown, the same author who wrote the second cited link. It repeats some of the information in the second link, but adds new information. I tried to locate the original article on the internet, but could not find it (perhaps tech-savvy readers will be able to do so). I wanted to mention that this article strongly infers that new holographic-compatible smartphones will be able to generate “life-size, three-dimensional representations of people who aren’t really there.” This is truly an example of science fiction becoming science fact. Remember the Star-Wars movies where the Jedi High Council would have some of its members present in person and others would be attendees via holographic images or avatars? That will apparently soon be a reality in our modern world. If holographic technology becomes readily available at some point on all future smart-phones, it will be able to reach everyone in the world with holographic images via their personal smart-phones.

The third link graphically depicts how a new “mixed-reality platform” will soon be able to enable real people to interact in the same room with the holographic avatars of remote people in the same room with mutually-discernible visual and audio abilities. Be sure to watch the video-clip of how this will happen. Consider the endless ramifications of being able to have such secret meetings in all kinds of diplomatic, military and intelligence-gathering contexts. Indeed, I suspect that this may already be happening among the more advanced intelligence services of many modern nations. Think of the spying capacities that are possible if a holographic avatar could be projected invisibly into an enemy’s war-planning session or secret technological facilities, but be able to listen to all that is said and transmit it to a remote site? This would be an immense spy-craft tool which would give the user of such a system unthought of military advantages. Because the actual secret level of development of new technologies is always far ahead of what is shown to the general public, this kind of technology may already be in use in our modern world. Consider another possibility. Just as a Zoom connection can be made with either a video or audio connection, surely this new holographic avatar system will be able to do the same thing. All kinds of deceptions could be perpetrated via this system. If a human’s holographic avatar is projected into a setting with the audio portion “on” but the visual portion set to a “stealth” or “invisible” mode, the people in a group might think they are hearing the invisible “voice of God” or the “voice of an angel” when, in fact, they are hearing no such thing. The false prophet or “man of sin” spoken of in New Testament prophecies could easily use this technology to dupe people into thinking “God is on his side.”

How does this new technology fulfill the specific prophecy about the “image of the beast” in the book of Revelation? Revelation 13:14-15 gives us a good insight into what the Apostle John saw in his vision of what our latter-day civilization would become. I’m going to quote this verse in the The New Scofield Study Bible. Verse 14 states that John saw an evil, latter-day leader create an “image of the beast.” Notice that the “image of the beast” is a different reality that the actual “beast” personage himself. In other words, John saw that a visual representation of an actual leader was being manufactured by a process John could not possibly understand. In verse 15, it adds; “And there was given to him [an evil leader] to give breath to the image of the beast, that the image of the beast might even speak...(emphasis added).” While this would look miraculous to the Apostle John, we can understand today that this prophetic description is easily understood to be a simple holographic projection of a future global leader who will be called the “beast.” What John saw was a holographic projection assume human form and be able to speak to others. If smart phones are universally equipped in future upgrades to have this built-in holographic capability, a future “beast” leader could send a holographic avatar of himself to everyone on the earth via their smart-phones. It may even be sent in a 3-D, life-size format, which would be very intimidating. This holographic “image” of the beast could give orders to everyone, and it could be fatal to disobey the holographic image’s orders (Revelation 13:15, last part of the verse).

I think that the new holographic technologies being developed can easily fulfill the prophecy in Revelation 13:14-15 about an “image of the beast” being created which can be both seen and heard. It is sobering to realize that the technology to fulfill this prophecy is being developed and deployed today. It indicates that we may be closer to the end of our age than we currently realize. That such a prophecy in the Bible has been contained in the book of Revelation for the last two millennia confirms also that this prophecy could only have been inspired by a very real Creator God who can both foresee and control the future. The prophet, Daniel, also experienced the same thing as the Apostle John. Daniel wanted to know the meaning of the prophecies he had been given by God, but was told that they would not be understandable until the latter day period of time (Daniel 12:8-10). We are living in the latter days when these prophecies can now be literally understood, which should be a sobering thought for all of us to consider. Any reader who wants in-depth proof that we are living in the biblically-prophesied latter days will find such proof in my article, Are We Living in the Biblical Latter-Days?