Will Germany Get a Functioning Government…or a New Election? 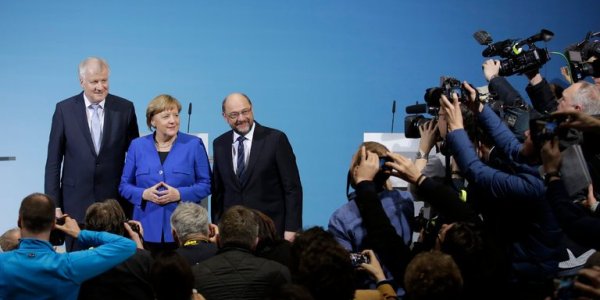 As many readers realize, Germany held national elections last September, and that those elections resulted in a confused political situation where Germany cannot yet form a functioning government. The first effort by current Chancellor Angela Merkel to form a governing coalition collapsed after months of fruitless negotiations. The second effort to form a renewed “grand coalition” between the centrist CDU, its conservative partner, the CSU, and the leftist SPD party have now officially begun, but “many obstacles remain” as the first link reports. The CDU/CSU and the SPD parties were barely able to conclude an exploratory round of talks which has now led to an official round of talks between these parties to see if any coalition is possible.

The first link  includes pessimistic phrases which reveal how difficult it will be form a coalition government in Germany. It states that the preliminary talks resulted in “an outline of a possible coalition (emphasis added),” and that “the steepness of the climb ahead remained evident” as these parties are not close in their governing philosophies. Besides the deep political divides between these possible coalition partners, they are both worried about their steady losses at the polls with each new German election. The CDU/CSU alliance and the SPD party both lost lots of votes and seats to other parties in the last election. The SPD membership has been particularly vocal that their party has been in decline since it was in a governing coalition with the CDU/CSU. The CDU/CSU lost a large swath of votes to the new rightist party, the AfD, which entered the German parliament as the third largest party in the election result. The SPD is steadily losing votes to other leftist parties like the Greens in recent election cycles and many of its members think the party must be in an opposition role if it is to regain its former numbers in future elections.

The second link mentions that the leader of the SPD, Martin Schulz, wants to create a “United States of Europe,” and the first link notes he wants a “strengthening of the EU.” I would like to opine that this is the very position which is causing the SPD to lose votes. The rightist AfD wants to halt or minimize Islamic (and other) immigration into Germany in order to preserve German cultural identity and sovereignty. The waves of immigrants unleashed into Germany who do not desire to assimilate into German culture has given the AfD fertile ground to make major gains in elections. SPD leader Schultz seems to want even more waves of non-German immigrants–which has led to the rapid rise of the AfD.

The SPD is pledged to submit any final agreement with the CDU/CSU to its grassroots members before it becomes effective. This is a shrewd negotiating position with the CDU/CSU as it forces Merkel’s coalition to yield to the SPD on many issues or the SPD rank-and-file will not approve the deal. The third link affirms that many of the SPD grassroots party members are already implacably opposed to any such deal. However, if Merkel yields too much to the SPD, her coalition ally, the CSU, could also bolt the deal. The odds are that some kind of an agreement will be patched together as each party to the governing negotiations seems to fear new elections. Merkel especially has a high motivation to facilitate any kind of a deal for her to hang on to power. I also believe that the CDU/CSU and SPD leaders have a very real fear that is left unstated. I think they want to avoid new elections because they fear the upstart AfD will do even better in the next round of elections. If that happens and the CDU and SPD continue to lose voters to either side of the political spectrum, Germany’s internal politics may be split between the Left and Right with a shrinking Center. The Leftist parties do not have enough power to form a government. The Center-Right does not have enough power either. If the negotiating  parties are unable to form a new government and new elections result in even more seats for the AfD, an unthinkable option may emerge as the only way to form a German government. The CSU could bolt the CDU alliance and join the AfD and the corporatist Free Democrats to cobble together a coalition to form a government if new elections give them a potential governing coalition. That possibility alone will give impetus to the CDU and SPD leaders to come to some kind of agreement to prevent that outcome.

Meanwhile, Germany has now gone almost one-third of a year without a functioning government. If the CDU/CSU and SPD negotiations do result in some kind of deal, that deal will then go to a vote of SPD members–and they are deeply split about entering any new coalition with the CDU/CSU, as the third link documents. Seeing his own SPD party ready to split if an agreement is reached, Martin Schulz has a high personal motivation to torpedo any deal to keep his political party intact with him as its leader.

For students of biblical prophecy, Germany’s fractured political environment has major implications. Germany is the dominant financial/economic power in Europe, and continuing uncertainty inside Germany means growing uncertainty and instability within the EU. Revelation 17-18 foretell the collapse of the current “insider” globalist power structure that governs the world. That prophecy (and Revelation 13:1-5) reveals that an alliance of “seven heads and ten horns” will overthrow the current globalist world system with considerable prejudice (Revelation 17:16). Now I would like to draw attention to a goal of the SPD leader, Martin Schulz. The second link reports that he wants to create a “United States of Europe” by 2025 and (this is very important!) “with countries that don’t join up leaving the EU.” Did you catch the intent of that statement? Schulz wants to create a strong, federal EU which will rule over the nations of Europe, and he wants nations that don’t want to be part of such an EU to “leave” (translation: they will be “kicked out” if Schulz ever has such power). In other words, he is willing to tear the EU apart to create his desired super-government over Europe. Keep in mind this is from a leader who is steadily losing votes inside Germany. However, since the EU’s leaders are appointed by Europe’s insiders and are not elected by anyone, Schulz could be appointed the new EU leader without any vote by anyone. His appointment would almost surely splinter the EU as we know it today. If it does splinter into separate groups, I’m sure many biblical students will be watching closely to see if any of the subsequent alignments constitute either seven or ten nations. I’ll be watching as well.

For more information about how the prophecy of Revelation 17-18 applies to modern nations and geopolitics, please read my articles, Is Babylon the Great about to Fall…Ushering in a New Beast System? and The Babylonian Origin of the Modern Banking System. These articles will give you a perspective on modern events that you will never be allowed to see in the mainstream secular media.