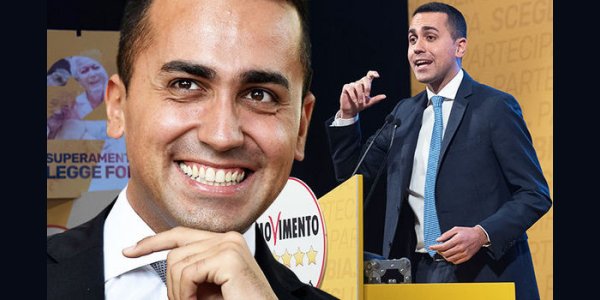 While the media here in America continues to virtually ignore important events in the rest of the world, the media in other nations are covering vital stories. Did you know that Italy is holding a national election next week on March 4th? The results of that election will have a major bearing on what will happen within the EU later this year.

Below are three media reports from the British media about the imminent Italian election. As of this writing, things do not look good there for the pro-EU parties. The first link reports that polling indicates the Euro-skeptic 5-Star party is in the lead to finish first in the election. However, there are many parties in the Italian election and no single party is likely to command a majority of the vote–meaning a coalition government of some kind will be necessary. The second link indicates that a coalition of four rightist and mostly anti-EU parties (separate from the 5-Star party) is likely to command the most seats in the next parliament and form Italy’s next government. The third link cites a poll that the incumbent leftist, pro-EU party is falling badly in the national polls and looks likely to have no role in the next Italian government. Italy’s has its own election rules, and the outcome is uncertain. The election may even result in a weak caretaker government as is currently the case in Germany.

I will make no predictions about the election’s outcome, but if an anti-EU coalition forms the next government, the EU itself will be in severe trouble. The EU traditionally was held together by four major nations dominating the EU while smaller nations generally fell into line. The four major nations were Germany, the United Kingdom, France and Italy. The UK has already voted to leave the EU in its famous Brexit vote that shocked the world. Even though it is leaving the EU, the exact nature of the Brexit is not yet clear and Prime Minister May’s government is held together in a weak governing coalition. Germany held an election last Fall and it still does not have a new government due to a failure to form a new governing coalition. Chancellor Merkel heads a caretaker government that is trying to put together a coalition with the leftist, pro-EU SPD party. However, many in the SPD grassroots oppose such a coalition and their party members must approve any such coalition. Little news is being given out about the negotiating process (fourth link), but Germany faces either a weak coalition government or new elections. France has a stable, pro-EU government. If Italy elects a Euro-skeptic governing coalition, it will change the EU’s internal dynamics a great deal. It would mean Germany and France could no longer count on the support of Italy in forming EU policies.

Also, the smaller nations of the EU no longer are reluctant to buck the EU’s policies and diktats. Poland is emerging as a leader of the anti-EU, anti-immigration bloc within Europe and it has many supporters in the Visegrad Four nations (Poland, Hungary, The Czech Republic and Slovakia). Austria and Switzerland have been anti-immigrant and resistant to the EU’s demands on this issue. Almost all of the Eastern European nations have formed their own sub-caucus within the EU called the Three Seas Initiative Group and they strongly oppose the EU’s centralized policies on immigration, culture, religion ,etc. as some of my recent posts have documented.

The bottom-line of this post is that readers should realize that some event could create a major splintering of the EU with little or no warning. The Italian election could be such an event as it would leave the EU with the support of only one large nation with a pro-EU government (France). I’m not predicting the break-up of the EU as a result of the Italian election, but I want readers to realize that the EU’s cohesion is steadily coming apart, and at some point it increasingly looks like it will not be able to hold together. Whenever this happens, it could trigger a major global financial crisis as the Euro currency is not likely to survive as a major world currency if the EU itself comes apart. How would the separating nations divide the assets and debts of the EU? Would the Euro have any further role in the IMF’s “basket of currencies” that form its Special Drawing Rights unit of international commerce and trade? Would the unbelievably large number of global Derivative contracts that are currently denominated in Euros be destabilized or collapse outright due to counter-party risks?

As long-time readers know, I have often quoted the prophecy in Revelation 17-18 which foretells that a corrupt global power structure of government insiders and global corporations (Revelation 18:2-3) will have their self-serving, insider system suddenly collapse during the latter days of our age. The language of Revelation 18 depicts a situation where global merchants have plenty of goods and services to sell, but “no man buys their merchandise any more.” This would accurately describe a situation where the global monetary/financial markets melt down suddenly due to some unexpected collapse of the system. If merchants have plenty to sell but no one can buy anything, it sounds like there will be a crisis of confidence in the world’s fiat currencies. In other words, no one can buy anything because money has become either worthless or untrustworthy as a medium of exchange. This possible outcome is supported by the fact that the global system which replaces the current Babylon the Great system is called the beast system and it issues its own new financial/currency/monetary rules (Revelation 13:16-18). Modern money markets of all kinds are so interconnected via digital systems that a sudden crisis or failure in one of them can cascade quickly into a global melt-down. Indeed, Revelation 18:10, 17 and 19 all indicate the collapse will occur in “one hour.” This could literally occur in a global “flash crash” which runs out of control.

We do not know what the trigger will be that causes this future global melt-down, but the Bible indicates that it will happen when the Creator God wants it to happen. For more in-depth background on this global trauma that is in our future, please read my articles, Is Babylon the Great about to Fall…Ushering in a New Beast System?, The Babylonian Origin of the Modern Banking System and Should Christians Prepare for Future Hard Times?