WILL CALIFORNIA SECEDE FROM THE USA OR DIVIDE INTO SEVERAL STATES? 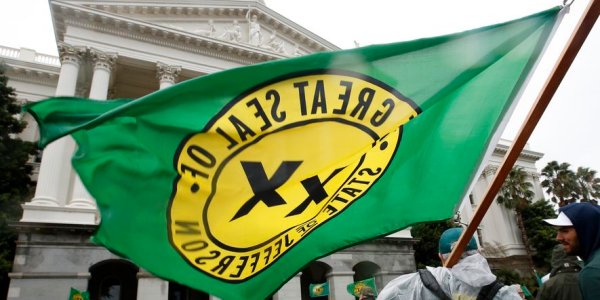 As most of us in the USA celebrate our annual American Independence Day observances on July 4th, a significant number of Californians do not share our enthusiasm for the meaning of this significant date in our national history. Some Californians want to either leave the USA in a Calexit vote or subdivide their state into two or three individual states. Let’s consider that second option first.

In what may be a surprise to many readers, supporters of an effort to carve California into three new states have obtained enough signatures to place this issue on their state’s November election ballot. It will be most interesting to see whether this ballot initiative is approved or not by Californians in November’s election, but I think that there is an ulterior motive to this measure. The first link and second link examine this ballot measure, and one has a map illustrating how California could be divided if the bill passes. The links comment that the expected borders of the new three states will create three urban-dominated states instead of just one urban-dominated state as California now is. The word “urban,” of course, indicates that the Leftist Democrat vote in the major metro areas in California would dominate the three new states instead of the current single state. Why do this? I think a look at the political ramifications of such a measure gives us an obvious answer. If California divided into three Leftist-dominated states, each new state would send two senators to the US Senate in Washington, DC although there would no increase in California’s net representation in the federal House of Representatives. This ballot initiative is, in my view, a thinly-disguised effort to send six California senators to the US Senate instead of the current two senators. This would tilt the US Senate to the left in its political balance, and I think this is the entire purpose of this effort. This would be very bad for conservatives and the Republican party in national politics.

However, I have good news for conservative readers. Even if the measure is approved in the November California election, it does not mean that the measure will ever be implemented. The vote has no binding legal effect, so the outcome is strictly advisory in nature. As the first two links point out, Article IV, Section 3 of the US Constitution governs how new states are admitted into the union. It specifically forbids the formation of new states out of an existing state’s borders unless the Legislature of the state agrees and the US Congress agrees as well. There is one precedent for this happening. When the US Civil War began in 1860, the western counties of the seceding state of Virginia wanted to stay in the US federal union, and they petitioned Congress to allow them to join the union as a “free” state. The Congress agreed to do so, and this is the origin of how West Virginia came to be a separate state in the USA. However, I think there is a minimal chance of any US Congress approving the subdivision of California into three states. It would erode the power of small states in the US Senate, and I expect small states would oppose it in the US Senate regardless of party affiliation. It is possible that Leftist Democrats are hoping for a huge Blue Wave in the November election that would elect so many Leftists to the US Congress that the new Congress might approve California’s subdivision. I do not think that such a result is likely. Also, I am not sure how the votes are counted in the US Congress in any such effort to subdivide a state. Do the Representatives and Senators vote as individuals or do they vote as state delegations? Legal-minded readers could consult the archives of the 1860 vote which allowed West Virginia into the Union if they wish to do so as that would likely set the precedent regarding how any such action would be considered in our modern time. Importantly, the second link cites a poll which shows Californians are overwhelmingly opposed to this measure.

Now let’s consider the possibility that California might secede altogether from the USA. The third link addresses that possibility, and it has an interesting piece of information. The person originating this idea is a Russian sympathizer who may move to Russia to reside there instead of in the USA. Does this mean that Russians are trying to meddle in US elections via infiltrating the Democratic/Leftist side of the political spectrum? Those supporting this effort want to gather enough signatures to place it on the 2020 ballot. However, I think this has no chance of being approved. Once the citizens of California realize that leaving the US federal union would mean an end to Social Security and Medicare checks for Californians. Also an end to regular US federal disaster aid for wildfires, earthquakes, etc., being burdened with their population’s very large share of the US federal debt,  and a halt to all kinds of federal welfare programs, I think pocketbook realities alone would preclude any approval of such a scatterbrained idea. Also, if California seceded, it is possible no Democrat could ever again be elected president of the USA as California’s automatic 51 electoral votes for the Democrats in presidential elections would “disappear.” This political reality might make national Democrats oppose a California secession even more than the Republicans!

However, I also have a biblically-based reason for believing a California succession is highly unlikely. As readers of my books already know, I believe the Bible does include the USA in its latter-day prophecies. Indeed, it hardly makes sense that if the Bible is the inspired Word of God that it would fail to mention the most powerful nation on earth in its latter-day prophecies. Many people have heard of the so-called “lost ten tribes of Israel” in ancient history and most assume that these are lost Jewish tribes. That assumption is totally wrong. The ten tribes of Israel formed a separate northern kingdom called Israel in ancient times which was separate from the southern Jewish kingdom called Judah. The ten tribes were never Jewish in the ancient world and they will not be found among the Jews in the modern world either. When the Bible mentions the modern Jews/Israelis, it uses the term “Judah” to describe them (see Zephaniah 2, Zechariah 12 and 14 for example). Prophesies about the ten tribes use the term “Israel” to describe them (see Ezekiel 38-39 for example). This leads to understandable confusion in the modern world about the two entities. The dominant tribes among the ten tribes of Israel were the brother tribes of Ephraim and Manasseh. They were prophesied in the latter days to be a single great nation (Manasseh) and a company, multitude or fullness of nations (Ephraim)–see Genesis 48:8-49:28. Both would be named after the patriarch Isaac (Genesis 21:12, 48:16), and their descendants have been called Saka, Sacae, Sacans, Saxons.etc. throughout history. The modern Saxon nations constitute the single great nation of the USA and the English nations of Great Britain, Canada, Australia and New Zealand. The USA is the modern tribe of Manasseh and the other Saxon nations are the modern tribe of Ephraim. Since Genesis 48:19 indicates that Manasseh will be one single nation in the latter days, I do not think it is in God’s will for Manasseh to subdivide into two or more nations. For this reason, I also believe God did not allow the American Civil War of 1860-1865 to result in two separate nations of the tribe of Manasseh.

My books extensively document the history and modern locations of all the ten tribes of Israel, utilizing both secular and biblical evidence. I strongly urge you to obtain copies of them if you have not already done so. The extensive four-book set is available at the homepage of this website as is the downloadable E-book on the subject. If you read these books, your eyes will be opened concerning many things that are happening in modern global geopolitics, and you will understand the flow of ancient history far better as well. For more information on these topics, I recommend that you read my free articles, The USA in Biblical Prophecy and Are We Living in the Biblical Latter Days?

To all my fellow Americans, I wish you a very meaningful and joyous Fourth of July celebration!