Will a Mosul Dam Collapse Lead to a Disaster of Biblical Proportions in Iraq? 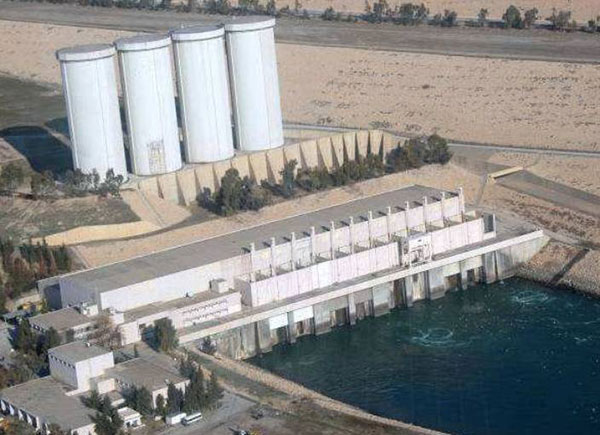 Much of the world is unaware that a disaster of biblical proportions may be in the offing in the nation of Iraq. In the northern region of Iraq there is a “Mosul Dam” located north of the city of Mosul, not far from the ruins of Nineveh, the old capital of the ancient Assyrian Empire. This dam was built rather hurriedly during the reign of Saddam Hussein, and it was not sited correctly. It was built on an unstable foundation instead of firm bedrock. This mistake has caused the Mosul Dam to require constant maintenance in order to keep it from collapsing. Due to the fact that ISIL factions have been active in that region and for a time controlled the dam, the required maintenance has not been done on normal schedules. As a result, the dam is becoming steadily more unstable.

The first link includes a fairly detailed, but very readable, description of the engineering problems and how they could lead to a catastrophic breach of the dam, sending a fresh-water tsunami all the way down the Tigris River to the Persian Gulf, engulfing such Iraqi cities as Mosul, Tikrit and Baghdad. The first link estimates the death toll could reach between one half million to a full million people. The damage to infrastructure and buildings would be incredible. The first link estimates how high the “tidal wave” that would hit these cities would be and how long it will take to reach them. The second link and third link, from mainstream news sources, NBC News and The Weather Channel, add additional information about this imminent threat. Indeed, NBC News estimates that the death toll could reach 1.5 million people. Had you heard that this catastrophe may occur in the not-too-distant future? One link notes that a western firm has been hired to stop the further degradation of the dam, but it may be a case of “too little, too late” to save the dam. Already, some floodgates either will not work at all or will not work properly, which increases the danger to the dam.

If this dam does burst, the tsunami it will unleash could effectively destroy Iraq as a nation. If this does happen, the refugee problem it would create could become as great as that caused by the Syrian Civil War.The tsunami would pass through the heavily-populated Shiite regions in the south as well as some of the Kurdish and Sunni regions in the north of Iraq. The disaster would almost certainly lead to Iran sending massive numbers of soldiers and “relief workers” into the Shiite region of Iraq, effectively annexing the entire Shiite region of Iraq into Iran. This would mean that Iran could move its new missiles and warplane bases much closer to Israel and other Sunni nations in the region. These missiles would also then be located closer to European nations as well. If the governing structure of Iraq is effectively wiped out in such a tsunami, the Kurdish autonomous region in the north would likely become an independent nation and portions of western Iraq would become part of either Jordan or Saudi Arabia, if the Sunnis can move fast enough to stop the Iranians from seizing all of western Iraq as well. If clashes occur, the war could widen and draw Israel and Egypt in on the side of the Sunnis and Iran might unleash all of Hezbollah’s missiles on the Israelis. Russia is already in the region and Putin will predictably act decisively. Also predictably, Obama will likely dither.

All these events could be precipitated by a single dam bursting in northern Iraq. Since the danger of this dam bursting is surely well-known to the Mideastern governments, I’m sure they all are preparing contingency plans for this situation. We do not know if the dam will burst, but if it does, it may unleash a tsunami of geopolitical changes in the Mideast as well as a tsunami of water. Let’s hope the dam holds…