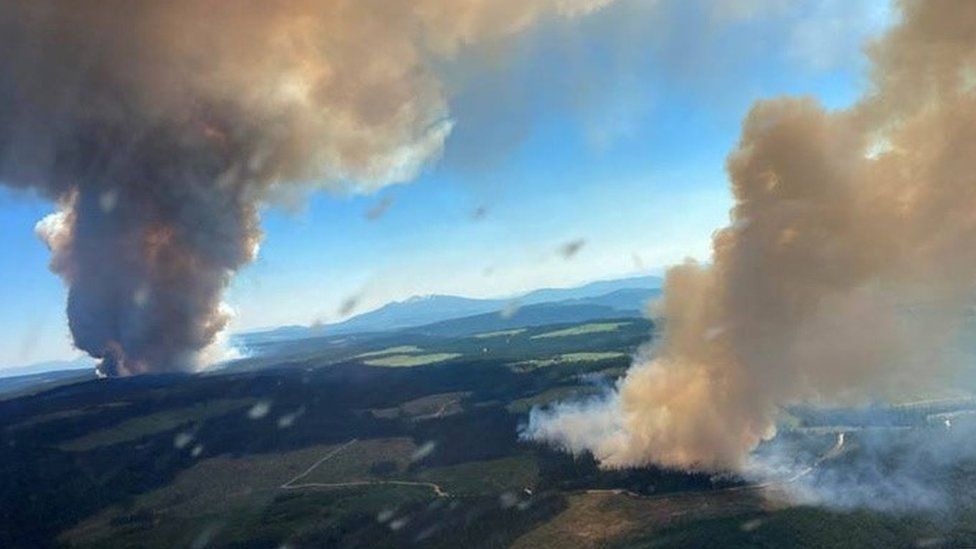 As many readers realize, a record-breaking dome of super-hot weather scorched the Western Northern Hemisphere for several days recently, exacerbating the effects of the worsening drought in this huge, food-growing region. From California to British Columbia and throughout Western American states, temperatures reached well over 100 degrees and even over 110 degrees in many cities. The highest temperature was 121 degrees in a town called Lytton, British Columbia. Seriously, how can it get that hot in the Canadian provinces? This is heat like one would expect in the Saharan desert in North Africa or the deserts of Saudi Arabia. The town of Lytton was hit not only by a terrible heat wave, but also by a wildfire which effectively destroyed it (first link). This would be bad enough, but it turns out that Lytton, British Columbia is an important transit point for the Canadian railway system and major railways depend on railway traffic passing through that town. A very serious consequence of the wildfire in Lytton is that it disabled the railway track-lines passing through the town and burnt a railroad bridge as well (second link).

The second link also reports that the railway outage in Lytton has caused long delays in shipment of just about everything that Canada exports to Asia, the USA and the world. It mentions Canadian grains, lumber and crude oil as some products that are stranded in railroad cars that cannot be moved or easily re-routed. The link adds that 2,670 rail cars are stranded due to this railroad outage in Lytton, British Columbia. That is a huge number of rail cars. Not only is it going to take a long time (weeks?) to get these rail cars moving and unloaded in Vancouver where ships are waiting to be loaded, this long delay is going to ripple through the commercial systems of many industries and nations. The thousands of rail cars that are stranded were undoubtedly scheduled to be quickly unloaded in Vancouver and then reloaded with cargoes heading for other destinations. All those other destinations expecting rapid transportation for their goods are going to have to wait perhaps weeks before they can be shipped. This could result in supply-chain problems which shut down assembly lines in a variety of industries. Asian nations that depend on Canadian raw materials will have to wait for some time to take delivery of their expected goods, perhaps shutting down assembly lines in Asian nations as well. Since Canada and the USA have extensive trade relations, this shut-down in the Canadian railway system is surely going to have supply-chain effects on American companies as well.

The problems are even worse than listed above. The third link reports that 4,600 rail cars are stranded in various bottlenecks due to the destruction of rail tracks. It reports it may take weeks to restore normal traffic. Indeed, at least one railroad bridge was damaged by the fire, and it will have to be repaired and perhaps re-built before rail traffic can safely move over it again. How long does it take to re-build a railway bridge? The link also mentions that in addition to the commodities named above, the stranded rail cars are loaded with all kinds of containerized cargo, plastics, steel making coal, etc. Since this steady stream of cargo to the Vancouver seaport is now stopped, the link mentions that a back-log of idled merchant ships is now occurring at Vancouver similar to the back-up of cargo ships that occurred when the Suez Canal was shut down due to a ship caught sideways in the Canal. The delays in getting products to market caused by this railway blockage, according the link, “threatens to leave store shelves short of key goods.” The link correctly points out that these spreading shortages will lead to inflation in the cost of many items.

The fourth link offers greater detail regarding the wildfire damage to the Canadian rail system in British Columbia. Its wording and its map show that the Canadian rail lines were damaged in more places than just in Lytton. This means there are multiple damage sites to the rails that have to be repaired before normal traffic can resume in an unknown number of weeks–and that estimate assumes there will be no more wildfires damaging more tracks in the region. The link asserts Canadian rail traffic in British Columbia has come to a “grinding halt,” and cites one Canadian company’s estimate that it will be unable to ship a half-million tons of steel making coal due to this prolonged shutdown. Obviously, this will idle steel mills somewhere. Was that steel-making coal headed to the USA, China or somewhere else? The link raises the question of whether this wildfire was intentionally set. If so, was it set by accident, by a pyromaniac, a terrorist or by the deliberate act of an agent of a foreign nation?  The answer is currently unknown.

What is known is that it is becoming increasingly clear that the supply-chains of many industrial and consumer products we take for granted are no longer secure. The globalist strategy of dispersing supply chains for products all over the world is now globalism’s Achilles heel. Whether it is cyber/ransomware attacks, wildfires or other natural disasters or deliberate cyber-attacks, it is now clear that is easy for bad actors to disrupt or stop supply-chains for vital goods in many nations. The disruption of supply will result in inflation in the cost of many items as the demand for such items is inflexible. Given this fact, it is wise for people to protect themselves from the growing threats to supply-chain caused shortages by stocking up reasonable reserves of whatever supplies and products are needed–whether for business or individual needs. The “just in time” delivery system is proving to be a very bad corporate strategy in an age of increasing supply-chain interruptions.

This time of steadily-increasing global trauma was prophesied in the Bible to occur in an age-ending time called “the latter days.” Many prophesies reveal what will happen in the latter days, and the prophesied events are all happening now in our modern world. This can be seen in my article, Are We Living in the Biblical Latter Days? Some long-time readers of my blog might be thinking: “Is he mentioning that article again?” However, I ask long-time readers to remember that there are newcomers to my website who have never heard of that article, much less the biblical evidence that it contains. Those newcomers may not be well versed in the Bible and need the information in that article to take the Bible’s prophecies seriously. Given that we are living in a time of increased shortages, I strongly suggest reading (and heeding) the advice in my article, Should Christians Prepare for Future Hard Times? The information in that article is useful to anyone of any faith, but I addressed it to Christians when I wrote it years ago to combat the widespread Christian assumption which thinks: “I don’t need to prepare for hard times, God will take care of me.” That is actually not a valid biblical viewpoint. When God gives you advance warning about problems and threats in your foreseeable future, he expects you to heed his warnings and do something to prepare for it as best as you can. That article gives practical advice about how to make reasonable preparations for difficult times in the future. Very difficult times in the future are a certainty according to biblical prophecy. You need to take those biblical warnings seriously.

The wildfires shutting down key Canadian railway routes make it clear that much of what we take for granted each day is actually dependent on very fragile supply-chains and vulnerable infrastructures. Given the mega-drought that is spreading across Western North America, there are predictions for a record wildfire year ahead of us in 2021. How many other rail-lines might be damaged or destroyed in the USA or Canada by such wildfires? The fire-damaged rail lines in Canada have given us a warning not to take our supply-chains and infrastructures for granted. Revelation 6:5-6 warns that food shortages are a certainty in the latter days as it describes latter-day situations where food is rationed by price. Current events are showing that that prophecy is steadily heading toward fulfillment.