Why North Korea May Have “Nukes” Quicker than Expected 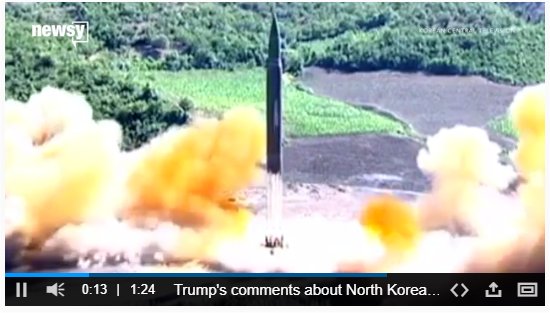 All readers are no doubt aware of the worsening crisis in the Korean Peninsula and the debate about how long the USA and its allies can wait before they must launch a preemptive military strike against North Korea to prevent that rogue nation from firing a nuclear weapon at the USA (or Japan). This post will make the case that North Korea might be able to launch a nuclear warhead at the USA sooner than anyone expects.

The first link is an article from the USA Today about his very topic and its outlines possible options for dealing with the crisis. Many options involve diplomatic efforts, and while that would be the best way to resolve the threat, there is nothing in North Korea’s history that indicates that diplomacy has any chance of success. North Korea seems determined to get a nuclear weapon to fire at the USA as soon as possible. The first link opines that “North Korea could be a year or less away from being able to place a miniaturized nuclear warhead on a missile that can hit a major US city (emphasis added).” If that is an accurate prediction, the USA is rapidly running out of time to exercise the military option to halt North Korea’s nuclear and missile programs.

However, the threat may be worse than media articles admit. North Korea and Iran have long been cooperating in developing common military technologies. The second link offers a detailed look at how close the Iranian-North Korean missile development technology programs appear to be. This cooperation has been going on for years. The third link is an analysis by the Council on Foreign Relations (CFR) from 2010 warning about Iranian-North Korean military cooperation. The fourth link documents how the Obama administration did nothing meaningful to protect the USA from this North Korean-Iranian axis of cooperation.

My concern is that Iran and North Korea have a secret “division of labor” agreement on developing nuclear ICBMs. North Korea wants to hit the USA and Iran wants to hit the Israelis. Perhaps North Korea is concentrating on the very open and obvious development of ICBMS while Iran is concentrating on a very hidden development of miniaturized nuclear warheads in their deeply-buried underground nuclear facilities. The first link notes that North Korea has “been selling all sorts of missiles to Iran,” while the second link notes that the Iranians seem to quickly field missiles that are copies of the ones developed by North Korea. If North Korea is sharing its missile development technology with Iran, it surely expects something valuable in return. What they may be expecting is Iran shipping miniaturized nuclear warheads to North Korea that can be fitted to North Korean ICBMs and fired at American cities before the US intelligence agencies think it is possible. Such agencies could easily underestimate the danger by gullibly assuming that North Korea must use indigenously-developed nuclear warheads on their ICBMs to hit the USA. That is a dangerous and foolish assumption, in my opinion. Given that we know Iran and North Korea are cooperating on military technologies and we know that Iran’s nuclear programs are largely hidden underground away from prying eyes, it is entirely possible that Iranian-developed miniaturized nuclear warheads could be shipped to North Korea sooner than anyone expects. If this is the plan, then Iran will not be shipping these nuclear warheads to North Korea via ships that could be interdicted. They will fly them to North Korea from Iran via the airspace of China and the the former Soviet “-stan” nations. Western assets will not be able to stop such shipment. Indeed, this could occur with China’s assistance or complicit awareness as China is an ally of both Iran and North Korea.

If Iran is supplying the miniaturized nuclear warheads to North Korea to hit American targets with North Korean ICBMs, the danger may be more imminent than anyone realizes. If Iran has developed miniaturized nuclear warheads and received ICBMs from Iran, then Iran could simultaneously launch such missiles at Israel at the same time North Korea launches nukes at the USA. Iran would then be involved in launching nuclear strikes against both “the Great Satan” and the “little Satan” at the same time. The most likely American targets to be hit by North Korea would be Honolulu, Pearl Harbor, Los Angeles, San Francisco, Portland, Seattle-Tacoma, etc. If North Korea actually launches nuclear missiles at the American West Coast (why fire only one?) and they hit American cities, the world will experience a nuclear war. Not only will the USA hit North Korea with retaliatory nuclear strikes, it could also target Iranian cities and sites if Iran built the warheads and Chinese targets could be hit as well if China consented to let Iran’s warheads travel to North Korea via Chinese airspace or territory. This threat is very serious. It may be so serious that, for example, the US Navy ought to keep more of its ships out at sea or at remote ports to make sure that fewer American ships are in ports or dry docks in cities likely to be targeted by North Korean missiles.

I do hope the intelligence agencies of the USA, Israel, Japan, etc. are sharing all possible intelligence on the possibility of Iranian-built nuclear warheads being shipped to North Korea to be placed on ICBMS that North Korea now has. A regional nuclear war is now possible. Indeed, if North Korea fires nuclear missiles at the USA or Japan, there is no need whatsoever to use conventional weapons to hit North Korea (and any other nation that helped them in such a diabolical effort). If North Korea crosses the nuclear threshold in an attack, the USA can reply with as many nuclear weapons as it wishes.

I do hope that the above danger does not become a reality. The best way to make sure it does not happen is for the USA and its allies to take out North Korea’s nuclear and missile programs with conventional weapons before North Korea commits national suicide by firing nuclear weapons at the USA. Some specific conventional weapons options available to President Trump for use against North Korea are included in the last link from The Washington Times.

If North Korea fires nuclear weapons at America, it is my bet that those miniaturized nuclear warheads were made deep underground in Iran and shipped to North Korea. Here’s hoping the US intelligence agencies forget about trying to undermine President Trump and focus instead on protecting the United States of America from what is a very real and imminent danger.