WHY IS THE TRIBE OF DAN NOT LISTED IN REVELATION 7? 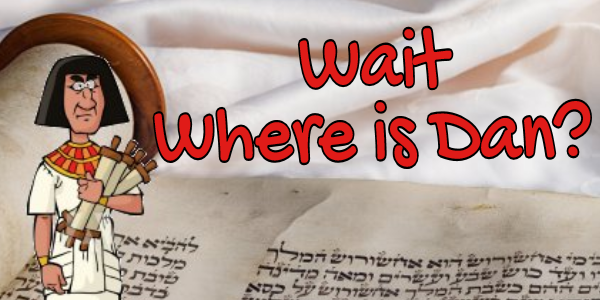 As many readers of this blog know, I used to travel extensively around the USA giving live messages about the ten tribes of Israel in both history and prophecy. I did these travels and messages from 1987-2007, but health and family issues made it impossible after that time. When I spoke to live audiences, I always had a Q&A session afterward which I enjoyed very much. It was always interesting to learn what aspects of Israelite history were the most interesting to people. During these Q&A sessions, there was one question which was asked perhaps more than any other. It came up regardless of the city in which I was speaking. It was “Why is the tribe of Dan not listed in Revelation 7?” Since so many asked that question during the twenty years I made live presentations, I thought I would offer an answer to that question in this post in the event current readers also have pondered this odd omission of the tribe of Dan in the listing of the tribes of Israel in Revelation 7.

I am not claiming divine inspiration in my explanation, but I am simply utilizing the logic of biblical scholarship in attempting to address the question. It is an important one as I learned that some questioners feared that if they had an ancestry in one of the nations identified in my books as Danite in the modern world that they would be not included in the “144,000” of the tribes of Israel that will be “sealed…in their foreheads” (verse 3) with a mark identifying them as servants of God who would not be harmed by God’s plagues in the latter days. My books identify the modern nations of Denmark and Ireland as being predominately descended from the tribe of Dan. For the sake of context, I will offer a brief digression on the tribe of Dan.

In the book of Judges, the tribe of Dan originally had an allotment of land in the southern coastal region of the Promised Land. It proved to be too small for their numbers so the Danites sent out an armed band to find an additional territory for their people to live (Joshua 19:40-48 and Judges 18). The Danites founded a second Danite tribal territory in the northern part of the Promised Land when they conquered the city of Laish and renamed it “Dan” after their tribal name. This habit of renaming locations after their tribal name became a Danite trait. When the Israelites went into exile from the Promised Land, the Bible relates that approximately 1/3rd of the Israelite tribes went into captivity and about 2/3rds migrated to new lands to remain independent in those new locations. While my books on the history of the ten tribes offer full details on all tribal migrations, the portion of the tribe of Dan living on the Mediterranean coastland migrated with part of the tribe of Simeon to the land now known as Ireland (secular sources name them the Danaan and the Simonii who arrived in ancient Ireland near the time Samaria was falling to the Assyrians). The northern portion of Danites joined the main Israelite migration of several tribes out of the Promised Land wherein they marched northward to the Black Sea region, evading the Assyrian captivity and conquering the kingdom of Urartu. Their new homeland became known as Scythia, and the Greeks called them the Sacae. This name included the root word of “Isaac,” the name Genesis 21:12 prophesied would be stamped on the birthright descendants of Abraham (the tribes of Israel). This migration is recorded in II Esdras 13:40-45. Upon arriving in the Black Sea region, the rivers flowing into the Black Sea were given Scythian/Israelite names to replace their formerly Greek names. All these rivers were named after the tribe of Dan (Danube, Don, Dniester, and Dnieper). The Danites who migrated to Ireland stayed there, but the Danites who moved to the Black Sea region later joined the great Caucasian migrations into Europe when the Parthian and Scythian Empires collapsed in Asia. Those Danites settled mostly in “Danmark”, typically naming the land after their tribal name, and they have been known as the “Danes.”

Now let’s go back to Revelation 7. Just as Genesis 49 offers prophecies about the nations of all the tribes of Israel in the latter days, Revelation 7 also mentions the ten tribes of Israel as being present in the latter days of our age, so it is very clear that the Bible prophesies the ten tribes will not die out but will be found among the nations of the modern world in our time. My books follow the history of all the tribes of Israel from the time of the patriarchs to the present, and they are available at my home page for those interested in learning their fascinating but mostly overlooked (and suppressed) history. Revelation 7:1-8 lists all the tribes of Israel except Dan. This exclusion of Dan sounds ominous at first glance, but there is an answer which I think makes sense that shows Dan’s omission was an accidental text-copying error that crept into the canon at some point during the last two millennia of the translations of the Bible through various languages and manuscripts. It is known to biblical scholars that a few translational errors have crept into the Bible over the millennia. Rarely, they can be intentional. Such is the case in Acts 12:4. In the King James Version, the Greek word for “Passover” was mistranslated as “Easter” almost certainly because the translators had to please King James and the Church of England so they purged the scripture of this “Jewish ” content and inserted a wrong word that they knew would be acceptable to the English King. This error was so obvious that later translations, such as the Revised Standard Version corrected it and properly render the word as Passover, not Easter. This example is included to confirm that there have been a few errors in the scriptures.

Revelation 7:5-8 lists twelve tribes with 12,000 members each in the “144,000” tabulated in this listing. However, there are two evident problems. One is that in verse 4 we find the introductory words to this listing of the tribes. It states “a hundred and forty-four thousand of all the tribes of the children of Israel”  (emphasis added). Notice that word “all.” Verse 4 clearly states the original intent was to include all the tribes of Israel in the following list and that none were to be left out. Some ancient scribe read this and had to wrestle with an obvious problem. Throughout the Bible, there are 13 named tribes of Israel because the original tribe of Joseph was subdivided into the two tribes of Ephraim and Manasseh. This ancient scribe could see that he could only include 12 of the 13 tribal names because the prophesied math could not possibly work out (i.e. 12,000 x 12 tribes = 144,000) if he multiplied 12,000 x 13 tribes). To make the math work out, he had to list only 12 of the 13 biblical names for the tribes of Israel, and he chose, for whatever reason, to not include Dan. I think this is evidently what happened because the scribe didn’t realize that he actually listed the tribe of Manasseh twice in his listing in Revelation 7:5-8. Notice also that the scribe did not include the name of the tribe of Ephraim either! He listed the tribes of Manasseh and Joseph but deleted Dan and Ephraim. I think he did not appreciate that Manasseh was included in the tribe of Joseph so it got listed twice (once directly and once incorrectly). Ephraim was a part of the tribe of Joseph so it was included indirectly in this list. If the scribe had realized that Ephraim and Manasseh were both included in the overall tribal name of Joseph, he could have listed Dan instead of Manasseh in verse 6 and the problem would have been solved.

This explanation is strengthened by the fact that the translators of Genesis 49 included all the tribes of Israel in this list of their presence in the latter days by using the original 12 tribal names (using the tribal name of “Joseph” which automatically includes both Manasseh and Ephraim). If the scribe who made the original error in Revelation 7’s list of the tribes in the latter days had understood what the writer of Genesis 49’s list of tribes in the latter days clearly did understand, the scribal error in Revelation 7 would never have occurred. So, if you are from a Danish or Irish descent, relax! You were meant to be included! Revelation 7:4 clearly shows all tribes were supposed to be included in the listing of tribes in verses 5-8, but some ancient scribe got confused about the terminology and math of the tribal listings. Also, since Acts 12:4 is a clear example of an intentional translational error making its way into the King James Version of the Bible, it is not hard to realize that an unintentional error could have been made during the translational processes over the millennia as well.

I hope readers found this commentary useful and that it sets some minds at ease about why “Dan” didn’t get included in the Revelation 7 listing of Israelite tribes. For abundant proof that we are living in the latter days of our age (when Genesis 49 and Revelation 7 are referenced), please read my article, Are We Living in the Biblical Latter Days?