Why Does Obama Have the USAF Flying Air Support for Iranian-led Ground Forces? 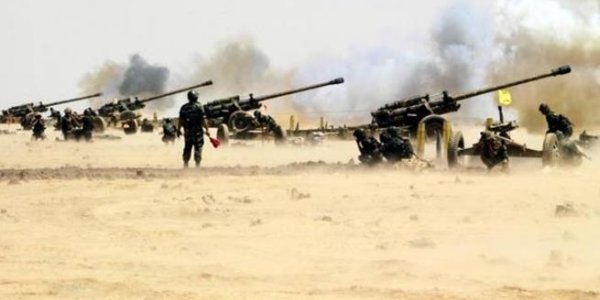 Just when you think things can’t get any weirder or more muddled in the Mideast, they do get weirder and more meddled. I’ve noticed in combining Israeli with American press reports that something very odd is happening in the war against ISIS. Did you realize that the US Air Force has been tasked by President Obama to fly air support missions for Iranian-led ground forces fighting inside Iraq? This is the same Iran which calls the USA “the Great Satan” and calls the Israelis the “The Little Satan” and vows to “wipe Israel off the map.”

The first link reports that USAF planes are flying combat support missions for the Iranian-led ground forces fighting ISIS in the Fallujah region. While American press reports tend to report that Iraqi ground forces are defeating ISIS forces, the first link indicates that Iranian-led ground forces, not Iraqi forces, are leading the anti-ISIS fight inside Iraq. The name of the Iranian general commanding the ground forces fighting ISIS is General Soleimani. Does he have an English-language translator who conveys targets to the Americans flying air support for his Shiite forces in the ground battle? American press reports also tend not to mention that Sunni civilians are being “slaughtered” by the Shiites who are being supported by US warplanes. Does this sound like what the US military forces should be doing?

In Syria, Palestinian militias (yes, I did say Palestinian militias) are joining Hezbollah forces inside Syria to fight in support of the Assad regime supported by Russia. The second link offers even more evidence that the identity of “friend” or “foe” is getting harder to define throughout the Mideast. It’s no wonder that the Israelis are going it alone in establishing their own security arrangements with Russia in the Mideast and leaving the USA increasingly “out of the loop.” The Saudis and other Sunni governments in the region must be fuming about Obama ordering the US military to support the Shiite, Iranian-led forces inside Iraq. I’m beginning to think that there are no “good guys” in the entire ISIS war zone except for the Israelis and the Kurds.

The US press and media reports I’ve seen or read recently have been celebrating the news that Fallujah has fallen to the Iraqi army, but the first link indicates that it is Iranian or Iranian-led forces that are fighting ISIS at Fallujah. Also, it turns out that, apparently, Fallujah hasn’t really fallen into the hands of the Iraqis or the Iranians just yet. A few days ago, USA Today reported in an article about the battle at Fallujah that: “The battle is not over…Iraqi government forces control about one-quarter of the city, the Pentagon said.” Hmm. Let’s do the math on that sentence. If the Iraqi forces (Iranian actually?) control “about one-quarter of the city,” that means that they do not control about three-quarters of Fallujah. So, if the percentages reported in the third link still apply today, who then does control the vast majority of Fallujah yet? Answer: ISIS. In other words, all the media reports that Fallujah has been retaken by “the Iraqis” are not true. Iranian-led forces have retaken perhaps a fourth of the city and Iraqi forces may not be doing much fighting at all. This indicates we can’t believe everything we hear or see in the media any longer.

It is not at all comforting to me that US warplanes are supporting ground forces led by generals from a nation which calls the USA “The Great Satan.” It is obviously quite OK with President Obama though. If the Fallujah battle is between ISIS and Iran–both of which hate the USA, why are US warplanes helping either side? Why are they there at all? Why not send US warplanes to support the Kurds in their fight with ISIS? The Kurds are also hated by ISIS and are not Shiite Iranian allies. So why aren’t our warplanes being limited to fighting ISIS in league with Kurdish forces on the ground?

The Mideast has gone mad. And I think President Obama needs to have his internal IFF (Identification Friend or Foe) system realigned so it aligns with key US interests in the region. I have no biblical passages to quote in this post. I just wanted readers to know about the information in these links which indicate Obama has currently turned US military forces into being allies of the Iranians. I doubt you will see that mentioned in any White House press release.