WHY DID THE GOVERNMENT SUDDENLY SHUT DOWN A SOLAR OBSERVATORY IN NEW MEXICO? 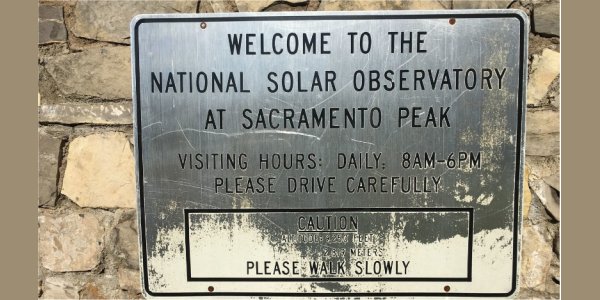 Something very odd has happened, and, so far, no solid explanation is available for the occurrence. This odd event has attracted the attention of both the mainstream and alternative media. As I write this, secrecy has shrouded the event, but perhaps more will be revealed in time–perhaps even by the time, this is posted.

On September 6, 2018, federal agents identified in many media stories as belonging to the FBI swooped down on a solar observatory in Sunspot, New Mexico and ordered all scientists and personnel at this location to evacuate in haste. Even the local post office was shut down and its postal personnel were evacuated. Locals in the surrounding area are baffled by what happened, and the US government isn’t saying anything (so far) about the reason for this sudden evacuation. The only reason cited for the closure is “national security.” The first link notes that the solar observatory which was suddenly closed down is close to the White Sands Missile testing ground and Holloman AFB and located in a state which is known for “secretive military tests.” The second link adds an important piece of information: that the New Mexico solar observatory was one of seven such solar observation stations that were shut down around the world, apparently in a coordinated fashion. However, the third link adds that a solar observatory located a mile from the hastily closed facility is still operational. The fourth link offers another perspective on the matter, and many other media reports can be accessed via a web search on the internet.

The links offer many speculative reasons proposed for the shut-down of the New Mexico solar observatory and six others located around the world. Some are plausible and some less so. One theory is that there was something hazardous that developed at the New Mexico facility which required its immediate evacuation. For example, a mercury contamination event was denied. However, if there was a local contamination of any kind, that would not explain why six other solar observation facilities around the world were also shut down. That argues that something is happening on or near the sun (or is about to happen) which global authorities do not want to be witnessed or publicized. This raises the possibility of a massive solar flare about to erupt, a sun-caused EMP event to hit the earth, etc. Even alien/UFO explanations for the mass shutdowns of solar observatories are being reported in these links (as well as many others accessible via web searches). We simply do not know the real reason why this action was taken, but it was done suddenly and apparently without any precedent for such action. Local residents are obviously curious about the reason for such a hasty closure, and the fifth link is an approximately sixteen minutes videotape of one resident’s walk around the closed facility–which looks like a ghost town. Watching that video will give readers of this post a good idea of the size of the observatory and the size of the facility that was evacuated. It also mentions that there was an overhead drone watching the facility during the video tour by locals. Was the drone operated by a federal agency, a local sheriff’s office, an interested near-by resident or someone else? We don’t know, but we do know the site is being monitored by aerial drone activity. I did find it intriguing that there was no official personnel present at the boundaries of the facility to prevent the public from simply walking onto the hastily abandoned facility.

I’ll state plainly that I do not know the reason for the hasty closure of this solar observation facility. I will, however, offer some suggested options and commentary on this matter for readers’ consideration. Let’s evaluate as many logical options as possible.

To begin with, since there is no obvious visible danger to humans on the video-tour of the closed facility in the fifth link, its hasty evacuation begs the question of whether there is an invisible danger that was released into the air at that site or onto its surfaces. One obvious precaution that I would take if I were going onto the closed facility would be to take Geiger Counter readings before entering the grounds or any building at the site. Since the Los Alamos nuclear facility is also in New Mexico, it is at least worthy of consideration that a radiological event may have occurred at this site. That would certainly explain a sudden evacuation and why no federal agents are posted at the site to secure it. However, such an explanation would not explain why six other solar observatories around the world were also shut down. It is also widely reported that many major governments have underground facilities dedicated to many purposes that have been kept secret from the public and from other governments. Perhaps there is such an underground facility at the New Mexico facility and whatever problem caused the sudden evacuation of the site occurred underground and would not be visible from the surface. Exotic weapons and technology-testing facilities of major nations would likely be located in underground locations away from the prying eyes of other nations’ satellites. I have no doubt, for example, that the weaponization of exotic technologies is being done underground by many nations. It would make sense that every nation would want to hide such facilities “in plain sight” or underneath unassuming locations that do not arouse any suspicions. The solar observatory in New Mexico is an innocuous facility that usually is open to the public and even gives tours of the observatory. That would be a great “cover” for a secret underground facility to be hidden there, although I clearly have no knowledge that any such facility does exist. I think all of us have seen enough James Bond movies to know that evil billionaires, cabals of nefarious secret organizations, etc. can hide secret facilities almost anywhere. If an exotic technology ever has a leak or escape of its secret materials, such as weaponized nanobots that are invisible to the naked eye, it could easily necessitate a sudden evacuation of personnel in the area. However, I hasten to note that any kind of hazardous material event at the New Mexico facility would not offer any reason for six other solar observatories around the world to be shuttered at the same time (unless the mass closures are a diversion). Overall, it seems most likely that something is happening near or on the sun that the global authorities do not want to be seen or publicized by parties not controllable by those government authorities. A possible major solar event that could cause an EMP event on the earth is one such possibility and the authorities may not want to “cause a panic” until they know such an event has actually occurred and the public needs to be notified quickly.

There is another possible explanation. It may be that absolutely nothing meaningful has happened–either at the closed facilities or with the sun itself. This may simply be an orchestrated drill to see how the media and public will react to such an event to test public reactions and fine-tune future measures to take if a threatening solar event does occur.

The Bible does have a prophecy that something will go wrong with the sun at some point in the latter days of our current age. Revelation 16:8-9 prophecy that a solar event will occur which will “scorch” mankind “with great heat.” This could indicate an unusually severe “solar maximum,” a mass coronal ejection that is aimed toward the earth or something else. The prophecy does not offer specific details. However, I doubt that this prophesied event is imminent now or that it has any connection to the closure in New Mexico.  The placement of this event in Revelation’s sequence of events puts it during the reign of the final “beast” system which will not occur until after the current, global Babylon the Great system collapses and is replaced by the beast system. That event may be years ahead of us yet; no date can be predicted.

For now, we do not know the full story of why the solar observatories were suddenly closed. Indeed, we may never know the reason why.

[ADDENDUM: It has been reported that the solar observatory closed in New Mexico under mysterious circumstances has now reopened. I’ve included a final link offering the official explanation for the closure. A “security threat” is blamed for the sudden closure of the facility and the small town’s post office, but that vague explanation offers nothing specific to define the nature of any specific security threat. A “security threat” at the New Mexico solar observatory does nothing to explain why six other solar-watching facilities around the world were also closed. Did they all have the same simultaneous security threat? Without any specific facts documenting the reason for this highly-unusual closure, the internet will be full of speculative commentary about this action for some time. I will close my commentary on the subject by repeating my post’s observation that we may never know the reason why the solar facilities around the world were closed suddenly.]