WHEN WILL GOD “DO SOMETHING?” 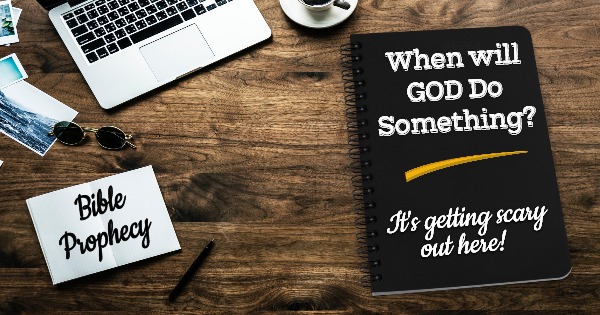 Have you or anyone you know ever said the words in the title of this post? Perhaps it was in response to some horrible crime you heard about on a news media report. Perhaps it was after hearing about some judicial decision that was an egregious miscarriage of justice. It may have been said in response to hearing/reading about any number of depraved and unconscionable things that are happening in society. If you have not said, heard, or thought these words, you are a rare person. Among people who have a biblically-based, Judeo-Christian ethical perspective, so much is going wrong in our world and societies that the words in the title of this post are being heard more often. Especially among students of biblical prophecy, this question is likely to be asked or thought rather often. I know I have said it in the past. The latter-day prophecies of the Bible have many warnings about how mankind will become very evil in the latter days of our current age. II Timothy 3:1-4:4 is a prime example of this kind of warning. I’m hearing more people say or write words like “Things are already so bad, how bad do things have to get before God does something?” This topic has been weighing heavier on my mind lately, so this post will offer my thoughts on this question.

My first comment is: You are not alone in asking “When will God do something?” Just after the Four Horsemen of the Apocalypse are discussed in Revelation 6:1-8, verses 9-11 picture the souls of all the martyrs saying with a loud voice: “How long, O Lord, holy and true, do you not judge and avenge our blood on them that dwell on the earth?” Whether the departed souls are saying this literally or metaphorically in behalf of the deceased believers of all time is a discussion I’ll not address in this post. What is clear is that even in heaven, this scripture confirms lots of voices will be loudly asking God essentially the same thing as the title of this post as the latter days deteriorate into a social and moral abyss. When God finally does “do something” about all the evils on earth and directly takes action to provoke mankind to repentance, it will terrify our planet’s inhabitants. Revelation 6:12-14 foretells God will display immense signs and miracles in the heavens which only a Creator Super-Being could do. Mankind will be so terrified that they will hide in rocks and caves and even be suicidal as God’s power is manifested openly. Another example of how things can change quickly when God intervenes is a little-noticed prophecy in Isaiah 43:14-15. In this prophecy, God foretells a time will come when he realizes that he has refrained from intervening in human affairs for a very long time, but will suddenly decide to intervene in an unmistakable way that demands everyone’s attention. God likens his actions as having the same effect on mankind as a “travailing woman” has on those nearby when she goes into labor suddenly. If a pregnant woman goes into sudden labor pains in a crowd, she gets everyone’s attention fast. God’s intervention in world affairs will have this same effect. Verse 15 says God will then intervene in judgmental ways mankind never thought possible. Mankind will be terrified as Revelation 6:12-14 prophesized.

I also think that church leaders and members need to realize that God may intervene in ways they do not expect. It strikes me that there is a great deal of complacency among church members/believers about God’s intervention in world affairs. Many assume that if they go to church regularly, have a lot of biblical knowledge, etc. that they will simply watch mankind suffer while they watch from a safe distance. This complacency may be shattered quickly. Ezekiel 9 is a chapter with a prophetic vision given to Ezekiel that God was going to punish and judge the kingdom of Judah when he was about to send them into exile in the early 6th century BC. Did he begin his punishments with the worse sinners in society? No, he began where few expected him to start. Verses 1-4 shows God sending an angel to put a [protective] “mark” on the foreheads of those people who “sighed and cried” about all the abominations being done in Judah. These are the, righteous who hated evils as God does. Those who received this mark were spared from God’s wrath–no one else was spared. Indeed, God tells the other angelic beings in the vision to have no pity on anyone else but to go through Jerusalem and start slaying everyone. Indeed, he tells them in verse 6 to “begin at my sanctuary.” In other words, God tells his angels to start killing the people in God’s own Temple first! Ezekiel tries to intercede with God in verse 8, but God stays angry because of all the “exceeding great iniquity” and “perverseness” that was in Judah’s kingdom at that time. 1 Peter 4:17 indicates that in the latter days, God will apply the same standard. He prophesized that: “judgment must begin at the house of God (emphasis added).”

The passage in 1st Peter 4:17 indicates that God’s judgment in the latter days, when he decides to “do something,” will start with his judgement on the churches of God whatever denominational name they call themselves. In his earthly ministry, Jesus was angered the most consistently by the leaders of the Pharisees and other sects of the Jewish society of his time. He lists the sins of the religious leaders of his time and condemns them in Matthew 23, pronouncing “woe” after “woe” upon them. In verse 33, he says to the religious leaders; “You serpents, your generation of vipers, how can you escape the damnation of hell?” Remember, he said that to the religious leaders who the masses looked up to as the most “righteous” people in their society.  In Ezekiel 34, God inspired a prophecy which pronounces damnation against the “shepherds of Israel that do feed themselves… instead of their flocks” (see verses 2 and 8). While this could apply to religious leaders throughout history, this chapter clearly applies to latter-day religious leaders as verses 22-24 shows it applies to a time when King David is resurrected to be king over all Israel (which parallels Ezekiel 37:15-28 when the resurrection of the dead occurs to climax our “latter day” age). The phrase about “feeding themselves” means the religious leaders of the latter days will be too concerned with their own monetary gain and creature comforts instead of the well-being of their flocks. Even elderly widows got fleeced by the religious leaders of Jesus’ time and it will happen again in the latter days (see my articles, Church Government and Devouring Widow’s Houses.) The second article will examine how “widow’s houses” are being robbed today by religious leaders as well. I also suggest you read my article, Biblical Teachings Regarding Tithing. This article shows how deeply this subject is misunderstood and misapplied among modern churches.

There is another reason that I think is causing God’s “delay” in taking a direct hand in mankind’s affairs. He needs to fulfill his prophecies. The latter days were prophesied to be a time when all kinds of sins and abominations will spread throughout human societies on earth (II Timothy 3:1-13). Jesus himself prophesied the latter days would be a mirror image of the latter days of the age of Noah just prior to the Flood (Matthew 24:37-39). How evil were the latter days of Noah’s age? They became so degenerate and evil that God finally directly intervened in their society…by executing all humanity in the Flood…except for the eight people in Noah’s family who were spared on the Ark (Genesis 6-9). How many people did God’s intervention execute? Based on the principle that our latter-day society will be like Noah’s, we have a clue. There may be 7 billion people on earth today. Genesis 6:1 records that mankind began to “multiply” on the earth in the years leading up to the Flood. Did Noah’s society also have perhaps 7 billion people at the time God’s direct intervention eliminated “all flesh” that was not on the Ark. We do not know, but the Flood killed a lot of people. Since it is God’s stated will that our latter-day society be like the latter days of Noah’s age, our societies must become as evil, depraved and degenerate as Noah’s society had become. God is again allowing mankind to become so depraved and degenerate that it will be an undeniable record for all time of how bad things can get on earth when God “takes his hands off.” If God were intervening in very public ways now, many people would start “fearing God” and mankind would never degenerate to the extent prophecy says it will in our time.

Eventually, everyone who has ever lived will know what happened in our time, and God has determined that our latter-day time will forever stand as a witness and warning to all that nothing but evil and depravity results when his Spirit is removed from a society. All the dead who are not in the First Resurrection to immortal life will someday be resurrected to a new physical life (Revelation 20:5-15, Ezekiel 37:1-14). At that time, there will be no secrets (Luke 12:2-3), and all the resurrected dead will see how evil human society became in our latter-day time. For a discussion about this little-understood time in God’s plan, please read my article, How Many will God Save?

When God decides to personally intervene in mankind’s affairs, no one will be able to hide from our Maker. No one should think God has currently forsaken the earth. He is restraining his growing anger, and by letting modern societies steadily degenerate, he is both fulfilling his ancient prophecies and giving the wicked even more “rope” with which to “hang themselves” at his eventual Judgment. Maybe we should all be careful when we think or say: “When will God do something?” Perhaps we need to be careful about what we wish for. One thing is for sure. When God finally does “do something” and intervenes directly in humanity’s affairs, we will all tremble.

That time is coming.