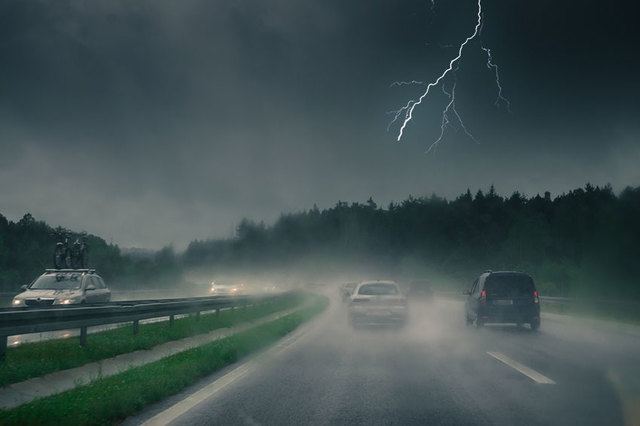 When you first began to read the title of this post, you may have thought you were about to read a lesson about how Jesus calmed the storm on the Sea of Galilee when he was with his disciples…and then you saw the year 2018 and wondered what I had in mind. I’ve considered writing about an important experience I had in 2018, and am now finally setting aside time to do it.

In August, 2018, my daughter, Amy, and I traveled to a town in Northwest Iowa to pick out a puppy for her. After she made her choice (which has worked out well), we began the return trip to Sioux Falls. We could see a very ominous-looking storm in the west on the other side of Sioux Falls, and we hoped we would make it back to our house before it hit the city. We turned on the car radio to a local station and learned that it was a truly major storm. Readers who have lived in the Midwest know that in the flat-land, you can see a major storm a long way off and that they can become so dark and foreboding that the street lights turn on when they hit because the light sensors think it is night-time. This was such a storm. We did not make it home before the storm hit.

As we reached the eastern fringe of Sioux falls, the rainfall hit hard. We decided to stay on the main city streets to have visual references to “keep our bearings” if the storm really turned bad. However, the storm kept intensifying and the intersections in lower regions of our intended route were already flooding and cars were in danger of being swamped. Therefore, we decided to get on the superhighway (I-229) which is sited around the southern portion of Sioux Falls. The storm was still strong and Amy was driving.  I was sitting in the passenger seat reviewing some materials from the dog-breeder that we had to fill out. Then I suddenly heard Amy exclaim: “Dad! Pray!” I quickly glanced up to look out the window and saw…nothing.  All I could see was a solid wall of gray and could barely make out the tail lights of a car about one car-length ahead of us one lane to our right. We were going about 50 mph on a superhighway with other vehicles going that fast (or faster) and suddenly had zero visibility. Obviously, our lives and the lives of everyone else around us were in danger. None of us could see the others and if someone stopped suddenly, it could be rear-ended at a high speed and start a chain-reaction accident. If we slowed up too fast, we could be hit from behind. Additionally, none of us could see where the turns were so we all were at risk of diving into a ditch in our blind paths. Amy had realized the danger. After I looked up, so did I. I immediately offered a brief (and very fervent prayer) that God would abate the rainfall quickly so there would be no accidents or loss of life in this sudden blindness in which we were all trapped. I had no sooner closed the brief prayer in Jesus’ name and said “Amen” when the following happened.

Immediately, the rain let up and we could see enough to have decent visibility again. Within the next 3-4 seconds, the rain halted altogether, the dense black clouds dissipated right before our eyes in every direction and we were driving forward under a blue sky with some wispy clouds. I am not exaggerating. It happened that fast. As the clouds were dissipating, it appeared to me as if the dark black clouds were being sucked into a vanishing point in the sky with extreme haste. We, and everyone else around on on that road who had been trapped in that visually-impenetrable wall of water, were safe.

Amy and I quickly realized we had witnessed something miraculous and that our prayer had been heard. We offered a prayer of very genuine thanksgiving at what was a clear case of Divine deliverance. I suspect that we felt just as awed and thankful as did Jesus’ disciples when Jesus calmed a great storm that threatened to swamp their boat on the Sea of Galilee (Luke 8:22-25).  I hope that this brief recounting of our miraculous deliverance strengthens your faith as it confirms that the same Jesus who calmed the tempest on the Sea of Galilee is just as able to help in similar situations today. He helped us and he can also help you. To add some attestation to this account, Amy has added a few words below about this event.

[I’ve read what my Dad wrote about what happened to us in the fierce storm we were in in 2018 coming back from Iowa. It was very scary and what my Dad wrote truly happened. There is no doubt in our minds that we were miraculously rescued by God’s intervention on that day.]