WHAT TEMPORARILY CRASHED MANY CRITICAL FEDERAL RESERVE BOARD FUNCTIONS? 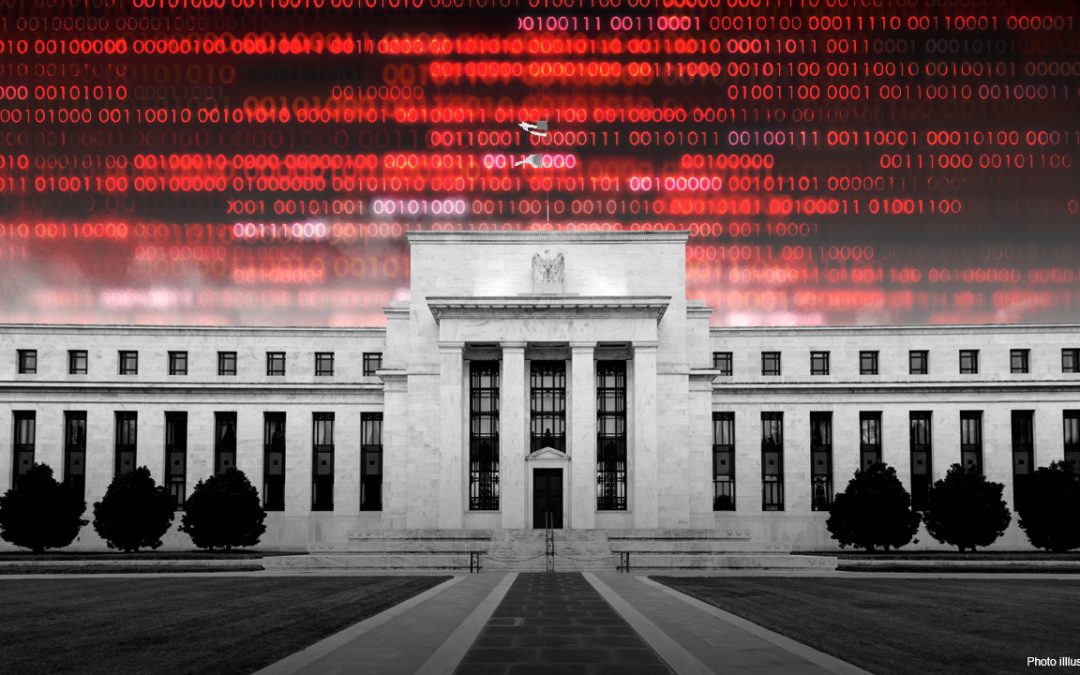 In late February, an event occurred which demonstrated how vulnerable the entire American and world economies are to sudden surprises. As readers surely know, the entire world economy is based on the monetary viability of many interconnected fiat currencies–none of which have any intrinsic value. Since the banking systems create the various fiat currencies and the US dollar is the global reserve currency, the beating heart of the global world financial system is the U.S. Federal Reserve Board–which controls and creates the supply of US dollars. While most of the world’s masses were unaware that it happened, the U.S. Federal Reserve Board suffered in late February the financial equivalent of a “coronary” event–a heart attack.

The Federal Reserve Board oversees and controls the operation of much of the American financial system’s functioning, and for a few hours in late February, these critical functions….stopped. The first link and second link detail the many Fed functions (collectively called “the backbone of the U.S. banking system,”) that simply died for a few hours before they were resuscitated. All kinds of public and private money-flow and payment systems crashed unexpectedly for a few hours, and many critical financial activities went off-line for a time. The first two links name many Fed functions that ceased to function: Fedwire, Fedcash, Fed Securities Service, and the National Settlement Service. Without these entities functioning flawlessly, the US economy will grind to a halt. One link says one Fed function was down for two hours and the other link says various Fed functions were down for over three hours. After this financial crisis, the Fed’s public reassurances essentially had this message: “Nothing to see here folks, move along, forget this happened.” However, critical questions remain about this financial heart-attack at the Fed. One question is: Given the dominant role of the US dollar in global commerce, how long would it have had to continue before digitally-interconnected financial systems began to collapse globally? We do not know the answer to that question.

Another question is: How could this happen? Given the critical importance of these Fed functions in the global financial system, this can’t happen due to someone accidentally unplugging the wrong power cord on a main-frame computer. The Fed surely has several back-up and fail-safe systems in place to prevent these vital funds-clearing systems from crashing…yet they crashed anyway. There must have been much panic at the Fed and in all the global financial centers when these vital Fed systems crashed. My personal suspicion is that the Fed systems were deliberately taken down by an external hack. I suspect that some nation-states and/or large trans-national entities had to be responsible in order to defeat the massive and layered defenses and systems the Fed surely has in place to prevent such a hack attack. More on this below. First there is another crisis affecting the U.S. dollar and the American/global financial system that the masses do not understand.

The U.S. federal deficit is so unimaginably large that it truly resembles a financial bubble about to burst…with catastrophic effects. The third link reports that the US government will need to finance $4 trillion dollars of its operations and costs just in the current year. That means it has to sell $4 trillion of U.S. treasury debt instruments to finance itself. However, there is an existential problem which has developed in the US government’s finances. That problem is no one wants to buy any of those US treasury instruments. Why? The obvious answer is that they are a dangerous investment–the global reserve currency now has the appeal of deeply-distressed junk bonds. As the third link succinctly puts it: “Foreigners…have stopped buying treasuries.” So who is buying them? The answer is given in the third link: “The Fed is now the last buyer…buying virtually all of the massive issuance of federal debt.” That also involves a huge problem which is not being told to the masses. None of the money the Fed is using to buy the new federal debt actually exists. The Fed is creating the money out of thin air, or as some put it: “They are loaning it into existence.”

What else could go wrong? The Biden administration and the majority Democrats in Congress are pushing an approximately 1.9 trillion spending/stimulus bill through Congress to fund some worthy causes and a wide range of Leftist wish-lists that could never pass on their own merits but which can be buried in a massively-long “covid relief bill” where hardly anyone will notice them. Is this $1.9 trillion included in the estimated $4 trillion federal deficit for this year or will it add another almost $2 trillion in debt to this year’s total debt? Either way, it can safely be assured that foreign governments and investors will continue to want no part of buying these very risky Treasuries so the Fed will continue to finance the bloating federal deficit with fantasy money.

With trillions of dollars of unpayable debt already outstanding and with the federal government incurring another $1.9 trillion or so for another huge pork bill under the rubric of a “covid-relief bill,” the US federal government being funded almost entirely by fantasy money from the Fed, and with foreigners already refusing to buy any more treasuries, the US federal budget is little more than a proverbial “house of cards” ready to fall. Venal and incompetent politicians are pushing the U.S. federal budget toward a financial Day of Reckoning that will be devastating for all Americans and much of the world. The U.S. dollar will almost surely lose its reserve currency status and it is entirely possible that in our digitally-interconnected world, all currencies and monetary institutions will be dragged down with it. Sound impossible?

Not only is it possible, Bible prophecy indicates that such a global monetary/financial collapse is a certainty. Revelation 17-18 describe how a global system of world finance and commerce will collapse suddenly at the end of our current age. This could only happen in a digitally-connected world, so this biblically-prophesied event could not have been understood as literally possible until a digital world economy was in place…as it now is. The exact trigger for this collapse is not specified in the Bible but it will result in a global crisis where merchants have all kinds of goods and services to sell, but no one can buy them (Revelation 18:11-16). The biblical prophecy about this event says repeatedly it will occur within one hour (Revelation 18:10, 17, 19). This gives immense credibility to this Bible prophecy as it foresaw a crisis that could only unfold in a digitally-connected world where the entire financial system was capable of having many dominoes fall over in rapid succession. The fact that the prophecy indicates no one will be able to purchase the goods that are readily available strongly argues that this is a global monetary crisis where all fiat currencies have collapsed. In other words, there will no longer be any acceptable medium of exchange in which to conduct financial transactions. The Bible also reveals that when this global financial/monetary collapse occurs, it will not be accidental. Revelation 17 repeatedly mentions a cryptic alliance called “the seven heads and ten horns” which will make war against the incumbent system of global monetary/finance and topple it. The language in Revelation 17:16 describes this collapse with rather violent terminology so open warfare is possible when this happens.

Let’s reconsider the recent unexpected collapse of the Fed’s critical systems in light of the prophecy of Revelation 17-18. Perhaps the collapse of the Fed’s critical systems for a few hours was not an accident. It may have been a deliberate “test run” by agents of the currently hidden “seven heads and ten horns” to see if they are capable of crashing the globe’s financial systems by crashing the Fed’s financial functions. If this was true, you can be sure that spokespersons for governments and financial institutions would never admit it…if they discussed the event at all. The incumbents in the global financial system will want this event to be forgotten as soon as possible; however, that it happened at all exposed just how vulnerable the current digital world economy is to sudden technological accidents or deliberate digital attacks. Either way, nothing can stop the eventual fulfillment of the prophecy in Revelation 17-18. The fact that the Fed suffered a technological “heart attack”‘ a short time ago argues the prophesied widespread attack on the current global monetary/financial system may not be far off…although I never set dates.

Revelation 17-18 will be fulfilled in a prophetic period of time known as the latter days, which you can prove we are now living in by reading my article: Are We Living in the Biblical Latter Days? The world came very close to a global financial collapse in 2008 and was reportedly “within hours” of a global financial melt-down so the kind of event prophesied in Revelation 17-18 has almost already happened. People have forgotten about how severe the financial crisis of 2008 was and the draconian measures that were being considered to save the global banking system. The fourth link is a post I wrote in the midst of that 2008 crisis which all but long-time readers of my website have likely never seen. An article I also wrote at that time was entitled, Is “Babylon the Great” about to Fall…Ushering in a Global “Beast” System? I recommend that article to you as well, and it contains a very interesting quote/prediction by then Vice-Presidential candidate, Joe Biden, predicting an intentional global crisis would occur which would lead the world in a “new direction.” This allows for the possibility that the current global system (often called the Deep State) will “arrange” a global crisis of some kind intended to consolidate the Deep State’s power and control, but which will backfire as the powerful alliance of “the seven heads and ten horns” hijacks the crisis in a way that it is the Deep State which actually collapses. There are many possibilities, but the one certain thing is that Revelation 17-18 will be fulfilled in our future…at a time chosen by the Creator God of the Bible

I hope you are making yourself ready for that time.