WHAT IS THE MISSION OF THE AMERICAN X-37B “SPACE-PLANE” 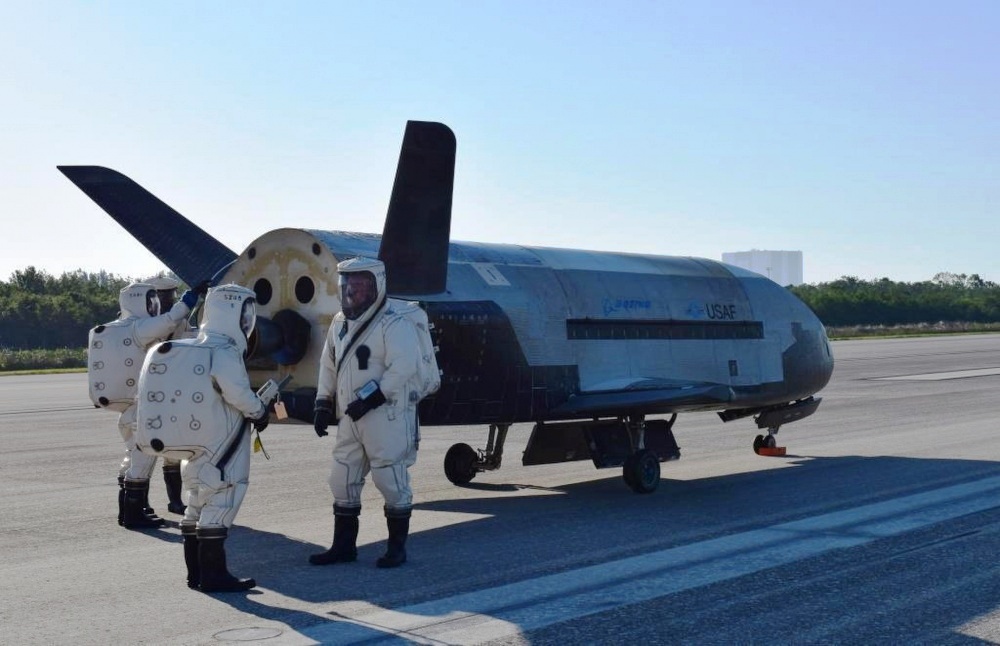 It is likely that readers have seen internet links with reports about the declining strength of the US military. One example is the first link. I believe this decline is due to several factors such as severe shortages in enlistments due to political-correctness being imposed on military personnel, a failure by Congress to build new warplanes, tanks, warships, etc. to replace aging platforms, etc. Also, why should a young man or woman want to join a military whose commander-in-chief orders his soldiers to abandon their weaponry on the field and run like scared rabbits from a weaker foe…as Joe Biden did to the US military in Afghanistan. Young men and women who want a military career surely want to serve a military dedicated to winning, and that commitment isn’t present in the current US military under our current commander-in-chief.

This severe weakness in leadership at the top is causing a weakened US military and this emboldens our enemies. What is present in the US military inventory which commands enough respect and fear in the eyes of our enemies to have deterrent effect against an attack on the USA, our allies and our overseas forces? Obviously, the USA’s large stock of nuclear weapons offers much deterrence, but in this post, I’d like to offer one possible candidate for creating some pause in the bellicose plans of our enemies. It is the American X-37B “space plane” which the US military has had for years and about which very little is known. The second link offers basic information about this very secretive weapons system. The X-37B looks like a downsized space shuttle. It is much smaller as it is unmanned so it needs no cabin space, oxygen, food and supplies for a living crew. It can orbit in space but it can also fly in the earth’s atmosphere. It can stay in space for an exceptionally long period of time. The third link reports that one X-37B has stayed in orbit for over 900 days! The link states that this X-37B “has a secretive mission,” with very little revealed about what it is doing while in space or what payloads it carries. What we can be sure of is that it is carrying a military payload as it is a US military space platform.

Anything as high-tech and secretive as the X-37B is surely capturing the attention of our enemies. Russia has been paying attention and has undoubtedly tasked many spies to infiltrate the X-37B program to determine its secrets. China has surely done the same thing. Any high-tech weapon system that has unknown capacities will draw intense interest from potential adversaries. The fourth link reports that Russia thinks the X-37B is a space bomber that can carry nuclear weapons, and that there are actually two sizes of the X-37B (presumably the bigger model has not yet been revealed to the public). The link then makes the case that the Russian beliefs are not true, but it concludes the article with a tease…saying “it is possible (emphasis not added)” that the space-plane’s capabilities could be what the Russian assert them to be. How’s that for leaving readers guessing what the X-37B really is? I think it can be stated that if it was only for scientific research projects, it would have stayed in the NASA agency. That it became a US military weapons system argues that it carries military armaments in its classified payloads. It is hard to imagine that any military force would spend so many billions of dollars on a sophisticated program and not put equally high-tech weapons in it.

The fifth link offers comments by a former US Secretary of the Air Force whose comments add more mystery to the space plane’s purposes. The link notes the payloads of the most recent flight of the X-37B are “classified,” and that the payloads are “the main secret” of the mission. Clearly, the payloads on a military mission are certainly military payloads and they are not disclosed to anyone who is not in a “need to know” position. What kinds of “classified” weaponry might the X-37B be carrying? Carrying nukes might be feasible, but there may be a treaty that prevents the nuclearization of space by earth’s major powers. If so, carrying nukes cannot be admitted even if it is possible to do so if war breaks out.

I’d like to offer a couple theories about what the X-37B’s armaments might include. Given the well-understood possibility of an Electro-Magnetic Weapon (EMP) being used against the USA or NATO, the X-37B might carry nukes of sufficient power to explode them over nations suspected of having a role in exploding any such weapon over US soil. Another is a bit more theoretical. I’m not a “rocket scientist,” but I’d like to suggest one possible weapon. It is known that meteors, comets or falling space debris can achieve very high velocities as they are accelerated by the “pull” of gravity drawing them toward the earth’s surface. Given this fact, a bomb or projectile fired from the X-37B wouldn’t need much of a propulsion unit to fire it at a target on the earth’s surface. Such a projectile could be a “smart” munition with optical-guided and/or GPS targeting systems to guide the projectile to hit the intended target on the earth’s surface. Gravity alone would greatly accelerate the projectile as it headed downward. It may need to be equipped only with small thrusters to ensure the projectile was steered accurately toward the target on the earth. A bomb with tons of TNT-equivalent would hit a target on the earth’s surface with immense explosive force. Such an explosion may not need a nuclear component to achieve a very high level of damage.

I admit there is an explosion which actually did occur on the earth’s surface that made me think of this possibility. In 2015, a large portion of the port city of Tianjin, China was destroyed when a massive series of explosions destroyed many blocks of the city. The sixth link offers a “live” video-recording of the blasts as they occurred. The video link is most impressive! The official explanation released by the Chinese authorities was that a mishandling of dangerous chemicals caused the explosion (seventh link). Chinese authorities acknowledged that the explosion “destroyed a large amount of equipment,” but did not itemize what all was destroyed. They did list the numbers of structures that were damaged by the successive explosions–which were estimated to have the explosive force of 3 and 21 tons of TNT. China said that 12,428 cars were damaged as well as 7,533 shipping containers and 304 buildings. 304 buildings were damaged!? How many buildings were present in each block that was devastated by these blasts? This total argues that many square blocks of Tianjin were destroyed or damaged. Over 12,000 cars destroyed? Does that include the number of trucks, buses and other vehicles that were destroyed or damaged? 173 people were reportedly killed. As you view the scope and intensity of the blasts in the sixth link, the number of people that would have been swarming over the busy port and warehouse facilities in a port city like Tianjin would have been high. I would guess the number of dead and injured were much higher than officially admitted.

It’s possible that the Chinese explanation may be correct, but it may also be an explanation manufactured simply to end curiosity about the explosion. We do not know, but back to my point. If explosive projectiles with several tons of TNT in explosive force were dropped from a space bomber on a city on earth, the projectile would be accelerated by gravity to a very high speed and it would explode with massive force (like what we see in the sixth link), which could also detonate greater secondary explosions if bombs, missiles, ammunition, etc. were stored in the spot hit by the descending projectile. I’m not saying that an outer-space projectile was dropped on Tianjin, but I am suggesting that such a space-based weapon system could cause explosions like the one recorded in the sixth link. Just for the sake of consideration, I’d like to remind readers that Revelation 18 describes a great port city will be destroyed in the latter days by explosions causing massive fires. Previous possible explanations for the fulfillment of this prophecy have included terrorists or enemy nations detonating a nuclear bomb inside a port city to cause such utter damage. However, we may need to add space-based weapons as a possible cause for the fulfillment of the prophecy in Revelation 18.

One final point. Revelation 13:1-4 prophesies about the birth of the final world-dominating “beast” system to exist on the earth before Jesus Christ comes to destroy and replace it (Revelation 19:11-20:4). When the beast system is unveiled, Revelation 13:4 foretells the nations will marvel and say “…who is able to make war with him?” Clearly, this means the beast leader will unveil previously unknown high-tech weapons systems which are operational even though they were previously kept secret. This could include such weapons as laser and plasma weapons, UFOs finally being revealed to be man-made weapons systems, invisibility technology keeping some major weapons invisible to the naked eye and….just perhaps…weapons that can be dropped on the earth by such space planes as the X-37B. I’ll be watching for the unveiling of these prophesied, previously-unknown weapons systems in the future. I suggest you watch for this event to happen in the future as well.