WHAT IS “THE IMAGE OF THE BEAST?” 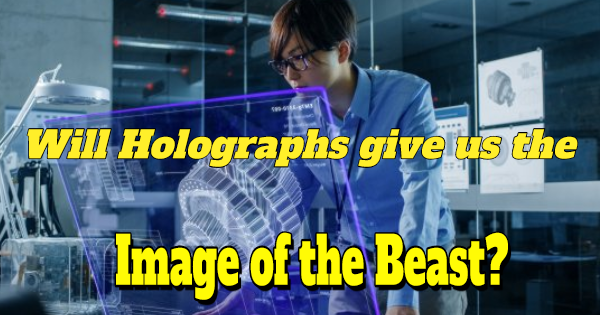 Many Christians are familiar with biblical prophecies that there will be a “beast and false prophet” in the latter days of this age. What is often not discussed much or even considered is the “image of the beast” that is prophesied in the book of Revelation to exist at the same time as the beast during his reign. What is the “image of the beast?” In this post, I’m going to offer a possible answer to this question based on how rapidly modern technology is advancing.

The Apostle John was given a very long vision of the technologies and the progression of events on earth that will unfold before Jesus Christ returns. John was told to write down whatever he saw during his vision (Revelation 1:2, 19), and what he saw has been preserved for us to read today. I think there is no doubt that we are living in the latter days of our current age. The Bible has so many specific prophecies, which have come to pass in our modern times which were never previously fulfilled since John had his vision. If any reader has doubts about whether we live in the latter days, please read my free article, Are We Living in the Biblical Latter Days? Our first question is: What did John see in his vision when he saw something which he described as “the image of the beast?” We must remember that John has to use his low-tech vocabulary to describe high-tech technologies which he was seeing in his vision. He had to do the best he could, with a vocabulary, which had no words for modern objects and activities. For example, in Revelation 9, John saw a visionary scene of modern warfare in which he clearly describes tanks, warplanes, attack helicopters, etc.

In Revelation 9, John is describing armored weapons systems, which fly and crawl across the ground. He regularly uses phrases, which indicate he was approximating what he saw in his native language. In many verses, John uses phrases like “as it were…,” “like unto…,” etc. He was telling readers that what he saw were not actually “locusts” or “scorpions,” but something which was similar to the words he used. In verses 7-10, he clearly was describing warplanes. He saw objects which were like flying locusts with “crowns like gold,” and the “faces of men.” This is an apt description of an airplane’s cockpit which would glint brightly in the sunlight and all you can see of the pilots inside their cockpits would be their “faces.” He describes them as having “breastplates of iron” and having very loud noises in their wings. That describes metallic fuselages and jet engines in the wings quite well. He adds they had scorpion stings in their tails.  As modern warplanes become more technologically advanced, they have increasingly become stealthier aircraft with weapons and weapons pods stored inside their fuselages and tails to reduce their radar profiles. John may have seen bombs, cannon tracers or cruise missiles coming off or out of the airplanes’ bodies (and fuselage tails). He may have seen World War II scenes as well. If you have seen newsreel footage of formations of many hundreds of allied bombers heading for Germany or Japan, their massed parallel contrails would have looked to John like the outstretched, long “hair of women,” and the “teeth of lions” would have been very appropriate if he had seen a squadron of the Flying Tigers which served in the Asian theater of combat. The iron “horses” which fired brimstone out their heads (verse 17) were clearly tanks. He could have interpreted the tanks’ gun barrels as being likened to extended serpent’s (snakes’) bodies (i.e. long and thin).

We need to apply the same technique to John’s terminology about an “image of the beast.” In other words, John understood the “image” of the beast in the latter days was not the beast himself but was a representation of him that was also visible. The Greek word translated “image” could also be translated “likeness,” so there was some technology in the latter days that would create a physical “likeness” of the beast but not actually be the beast person himself. John did have ancient words to describe paintings, statutes or icons of a person, and he did not use those terms at all. It is evident that even as the actual “beast” political leader will be ambulatory and animate, so will be the “image (or likeness) of the beast.” In modern terms, we might say we saw a “copy” of the beast figure if we were ourselves seeing John’s vision. This making of “copies” or “images” of a person is already happening in the modern world. We know them as holograms, which are exact “likenesses” of a real person and they can move about like a real person. It is entirely possible John saw the widespread use of holograms of the political “beast” leader being used at the very end of our age. Let’s consider how good holographic technology has now become in the modern world.

Stage performances of the deceased artists, Roy Orbison and Buddy Holly, are now so good that marketers feel they can sell tickets to their performances who want to see these singers as if they were real. The first link and second link offer samples of this holographic technology which shows them singing their original songs in holographic representations of their bodies. They can be backed up on stage by real musicians and back-up singers. A national tour has already been scheduled, and you can see the cities and dates where this holographic show will play in the second link. The third link has a sample of Roy Orbison singing a portion of his famous song, “Pretty Woman.” What tipped me off about the new holographic stage technology was an article about it in the Minneapolis Star-Tribune, which is attached in the fourth link. That holograms, can be used in stage performances is nothing new. Celine Dion and “Elvis Presley” sang a duet in 2007 technology which looked very realistic (fifth link) even though Elvis was only a holographic performer. If you have never seen this performance, you owe it to yourself to see how good this holographic technology was back in 2007. What is different now is that the holographic equipment and projectors are now light and mobile enough to “take the show on the road.” The links state that other deceased entertainers may soon be “going on tour” via holographic images.

Science fiction has long anticipated holographic figures being created which can interact to some extent with living humans. In the Star-Trek movies and TV series, various space ships had “Holo-Decks” that were large rooms wherein crew members could create holographic figures of long-gone people and places or contemporary people and places. The “people”, in the Holo-Decks, were holographic projections, which acted as if they were real people with mass, language skills, weaponry, etc. In the Babylon-5 science fiction TV series, the commander of the miles-long space station could communicate simultaneously with everyone on the base via a holographic projection of himself which would appear in all populated regions of the base. Modern technology is now beginning to implement the technologies which used to be the stuff of mere science fiction. Holographic projections of dinosaurs were shown in the Jurassic World movies. In the Star-Trek Voyager series, there was a holographic “doc” who was a human-like holographic projection, which had an artificial-intelligence program downloaded into him so he was a fully-functional physician.

I think it is virtually certain that holographic technology has progressed in secret far further than is being acknowledged publicly. Consider UFOs whose movements go swiftly at right angles or in other ways that are technologically impossible. Could some UFOs be holographic projections into the sky? They could move about in impossible ways and also appear suddenly and disappear suddenly as hidden holographic projectors were turned on and off. I’m just suggesting this as a possibility.

Remember when Americans were ordered to surrender their analog TVs and buy new digital TV sets, whether they wanted to do so or not? This act made it far easier for authorities to surveil all Americans in digital ways than were impossible via analog technology. What if, in the future, people are globally required to surrender their TVs and smartphones to receive new ones, which are equipped with holographic emitters? These mechanisms could, on command from a central authority, generate a holographic projection of the beast “giving orders” to the general population. It need not be life-sized holograms that are created. Remember the scene in the first Star Wars movie when the robot, R2D2, emitted a small holographic projection of Princess Leia, which said: “Help me Obiwan Kenobi?” Someday, your smartphone may be able to do this.

Matthew 24:37 prophesies that the latter days of our age will parallel the pre-Flood world of Noah’s time. After the Flood, the Ark’s contents became the basis on which the pre-Flood technologies could be re-built. Genesis 11:1-9 records early post-Flood mankind were already constructing a”tower” whose head-most portion (or “top”) was to be hurled into (or “reach”) the heavens. This was a low-tech way of trying to describe space rockets (think Cape Kennedy and Saturn rockets). God stopped that project quickly by altering everyone’s languages so knowledge could not then be pooled or shared. The language of Genesis 11 strongly infers pre-Flood mankind had a space program, and they may have left their structures as “calling cards”‘ around the solar system to be rediscovered when mankind would once again develop such technologies in the latter days of our age. Given the language of Matthew 24:37’s technology, holographic technologies likely existed in pre-Flood times as well. Genesis 11:6 records post-Flood mankind had, soon after the Flood, quickly attained the knowledge where they would be able to do whatever they imagined doing. I think we are at the same tipping-point of technological development today.

Since holographic technologies are already quite convincing, and they will become steadily more lifelike as knowledge increases (as was prophesied to occur in Daniel 12:4), it is entirely possible that the “image (or likeness) of the beast” which the Apostle John saw in the book of Revelation’s vision was a holographic projection of the political ruler-figure called the beast which could be manifested in many ways and locations. Modern technologies are progressing to the point where biblical prophecies can be fulfilled literally, not metaphorically.