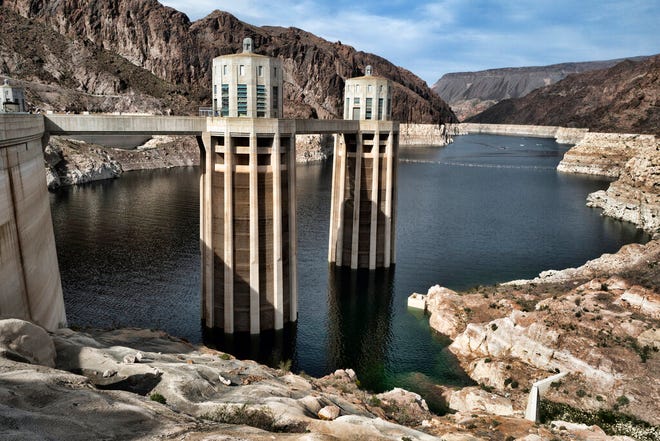 The historic drought in the Western USA has just reached a notable milestone. Due to the historic drought, the federal government has declared the “first ever water cuts for the Colorado River Basin” to take effect January 1, 2022 (first link). A number of US states, Native American tribes and even the Mexican government are stakeholders in the Colorado River Basin agreement, but the first round of water cuts will not be equal. Arizona will bear the brunt of the water cut-offs as Arizona will lose 18% of its entire water allotment. The first link notes that almost 2/3rds of the Western USA is now in the “extreme drought” category. The link notes that the water cuts affect a region with 40 million people and 2.5 million acres of cropland. Obviously, with so much water about to be lost to food growers in 2022, the amount of food produced throughout the Colorado River Basin region will drop significantly. Farmers will simply not have enough water to produce anywhere near their usual amount of vegetables, fruits, etc.

The second link adds that there is a “strong possibility” that another dry winter is approaching in the American West as part of the continuing “megadrought,” and that California will face water cut-offs in the next stage of water reduction measures. It adds that farmers will bear the brunt of the water reductions and that two large water reservoirs (Lakes Mead and Powell) have lost so much water that their ability to produce hydroelectric power may actually be lost in the foreseeable future. Since farmers will bear the brunt of the water reductions but many cities and other users will not yet lose water, this sounds like urban water-users (think private swimming pool owners and golf courses) will be able to continue their level of water usage, but water allocated to food-production will plummet. If this megadrought continues for years yet, everyone will rue the day that water was directed into maintaining swimming pools and golf courses in the desert while stopping farmers from producing food for the nation. The third link contains considerable detail about the impacts of the current water reductions as well as commentary about the possible future impact of deeper water cuts [Please note the photo of the water reservoir is a 2019 photo–the water has dropped considerably since that photo was taken.] It also specifies that Arizona will lose 512,000 acre-feet of water in this first round of water cuts.

California is facing a crisis which may be just the first stage of a crisis which will affect other southwestern states in the foreseeable future. Lake Oroville, a huge water reservoir in California has now shrunk to just 24% of its capacity, and it has had to discontinue all production of electricity from its hydroelectric power generating facilities (fourth link). This is the first time the reservoir has been so low that this has had to happen, and this loss has removed enough electricity from California’s electric grid to power 800,000 homes. This is a significant loss of electric power within California’s grid, but this is nothing compared to what will happen in Southwestern states if Lakes Mead and Powell continue to experience water-losses to where they cannot produce electric power either. Be sure to scroll down and look at the photo of the water intakes for the Oroville Dam’s hydroelectric generators sucking nothing but air instead of water. If the megadrought continues, the Western USA will face not only water and food shortages, but power shortages as well.

It is not just the southwestern states which are suffering severe impacts from the drought. In the headwaters region of the Mississippi River, the state of Minnesota has just implemented water restrictions on about 300 communities including the cities of Minneapolis and St. Paul due to falling river levels (fifth link). The drought is so bad that some channels of the Mississippi River are going dry in Minnesota (see photo in the fifth link), and see the drought monitor map for the state of Minnesota.

It is not only the USA which is being affected by weather traumas. Horrible wildfires have been reported in Greece and Turkey and droughts have lessened food production in many places on the globe. One such place readers may not have noticed is in Brazil, where its large coffee crop has been damaged by not only drought but killing frosts as well. The sixth link reports on this damage to the Brazilian coffee crop and adds that the frost-damage to the trees may affect the production for more than one year. This means that there will be a prolonged drop in the coffee production for at least two years. Personally, I don’t see how Brazil, a tropical nation through which passes the equator can suffer frosts but it can happen, albeit rarely. I guess Brazil is not worrying about global warming at the moment due to these unusually low temperatures.

There is another factor affecting food availability to many people on the earth. The seventh link reminds us that food availability depends not only on food production, but also on the food distribution systems of a globalist economy. The link informs us that after “a worker” contracted Covid, China “halted all inbound and outbound operations at a crucial terminal”…at “the world’s third-largest port.” The terminal affected by this shut-down handles shipments of products between China and the USA and Europe. This means that for an indefinite time, supply-chain disruptions for many products between China, the USA and Europe will steadily get worse. Some of these disruptions will affect foodstuffs. China buys a lot of bulk soybeans, corn, etc. from the USA and apparently these products won’t move for awhile. This type of food distribution problem can occur almost anywhere in the world. Previous posts have discussed the supply-chain problems at a port in British Columbia due to a major railroad failure as well as those that occurred when a large container ship got stuck in the Suez Canal and blocked all maritime traffic for days. The link says China shut down this major terminal due to a Covid infection in “a worker.” This sounds like they shut an entire shipping terminal down simply because one worker got Covid? That seems like a vast overreaction if that is correct.

I hope readers can see that food production is headed lower due to many factors. The fact that the USA has had to declare a formal water-rationing system of the Colorado River’s water means that the USA’s West is in an official water emergency….which is going to get steadily worse if the climatologists are correct that this megadrought will continue for years ahead of us. When global food production dwindles, problems in the global food distribution system will mean that some nations lose just some of their food supplies but other nations will lose major amounts of their food production–causing famines.

The Bible’s prophecies warned that global food supply problems would occur in the “latter days” of our age. Matthew 24:7 warns that famines will affect the earth in the latter days, and Revelation 6:5-6 warns that food will be scarce and rationed by price. The trends documented above are beginning to implement those prophecies. If the megadrought continues to worsen in the Western USA, the USA will experience shortages in many types of foodstuffs we now take for granted. So much of the nation’s supply of vegetables, fruits, nuts, etc. is produced by irrigated water in the Southwestern states that further cut-offs of water allocations will start causing common food products to disappear from grocery store shelves or be available only in reduced quantities where customers’ purchases will be limited. We are provably living in the latter days of our age as my article, Are We Living in the Biblical Latter Days?, can easily document. Have you begun to make common-sense preparations now for a future time of food shortages that now seems inevitable? If you have not, I urge you to read easy, basic steps to prepare for such at time in my article, Should,Christians Prepare for Future Hard Times?

When food shortages get worse in the future, I think the nation’s water priorities will change to maximizing food production instead of keeping vast numbers of golf courses green in the desert.