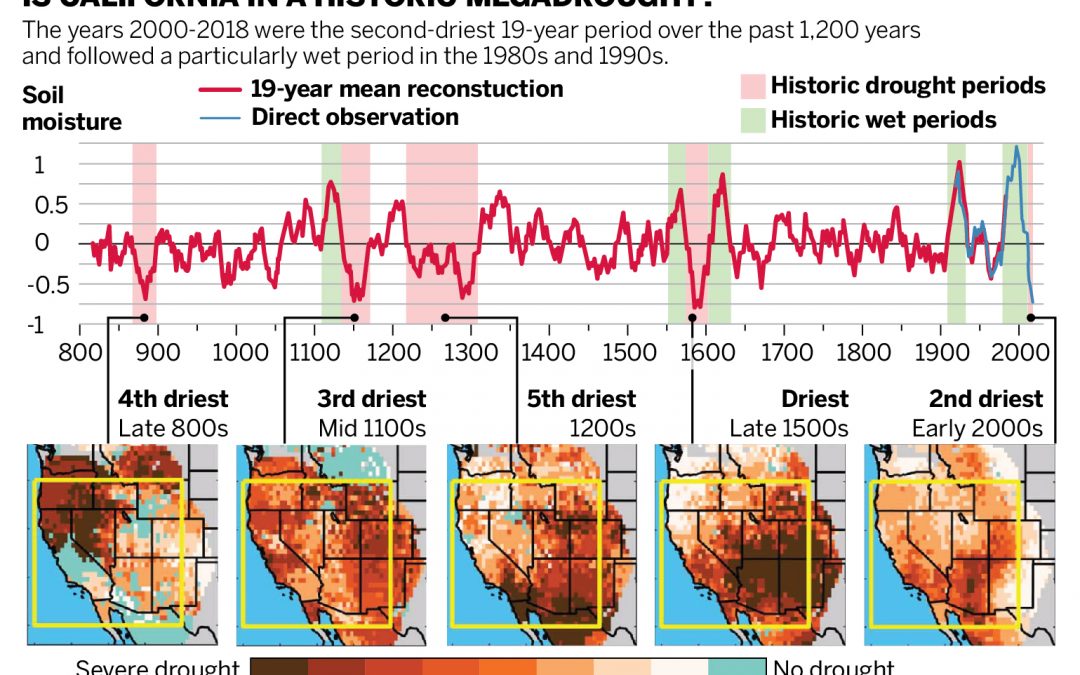 It has been a while since I posted on the status of the on-going megadrought in the western USA. This post is an update on what is still a worsening situation. The first and second links both assert a shocking and grim statistic: That climate records indicate the current drought in the southwestern USA is now the worst in 1,200 years! Please read that sentence again. It means we have to go back 12 centuries (!) to find as dry a time in the American Southwest as is now being experienced.

The first link has graphs and charts indicating the severity of the current megadrought, and it is clear that the years 2000 through the present are much drier than previous periods in recent times. The second link, from the establishment publication, The New York Times, acknowledges this is the worst drought in 1,200 years, but tries to blame man-made climate change for a significant part of this severe drought. That may or may not be true. Consider one objective fact: that a drought as bad as the current one also occurred in 800 AD proves conclusively that the earth has long-term climate cycles that can produce droughts as bad as our current one without any actions by mankind. In 800 AD, there were no internal-combustion engines, no coal-fired power plants, no industrial smokestacks, no plastics, no clear-cutting of rain-forests, and no greenhouse gases being produced by mankind then at all. Mankind’s technologies in 800 AD had changed little from those used by human civilizations for millennia. Modern science has proven beyond any shadow of doubt that the current southwestern American megadrought can periodically become this bad simply from the long-term climate cycles of the earth itself. The modern politically-correct narrative is to blame droughts and any negative climate event on man-made climate change, but it needs to be stressed that climatologists have shown that the earth can experience droughts as bad as the current one without any action by mankind at all.

Initially, it appeared that California and the American Southwest were going to get a break from the drought cycle in the 2021-22 winter season when heavy rains and snows hit California in October and December of 2021. The third link, with data at the end of January, noted that at one point in December, 2021, the snow pack in the Sierra Mountain range was 168% of normal. However, it notes that by the end of January, the snow pack was only measured at 93% of normal and it was expected to shrink more, on a percentage basis. The fourth link, with data as recent as mid-February, states that the snow pack had deteriorated to only 72% of normal, and it was expected to drop further as there was no meaningful precipitation expected through the end of February and into March. Indeed, the fourth link has the rather shocking statistic that January-February, 2022 were the “driest January and February in California history.” One official is quoted as observing the current water status in California has created a “pretty dire condition statewide.” In California’s complex water-allocation system, many water users are being told they will receive only 15% of their requested water allocations, and even that amount will be reduced further if the drought continues.

Since California produces a very large percentage of the nation’s vegetables, fruits and nuts, decreased water allocations to farmers and orchardists in that state means the nation’s food supplies will be reduced as well. In the current situation of already rapidly-rising prices for food and most other items in the American economy, the worsening mega-drought in the American southwest indicates that even steeper increases in food costs are likely as we progress deeper into 2022. The fifth link offers a glimpse at the latest (as of this writing) US Western Drought Monitor. It shows all of California in drought with the “severe” category being the most prevalent one. It shows that other states in the West currently have large swaths of land in the “extreme” or “exceptional” drought categories so this megadrought affects most of the western half of the USA.

It is not only the Western USA which is having severe drought. The nations in the Horn of Africa are having an even worse drought. The sixth link offers details about the extremity of the drought in such nations as Kenya, Somalia and Ethiopia. The link relates that cereal production in southern Somalia is down 58% and crop production is down 70% in parts of Kenya. In a region that is very dependent on livestock for meat, milk and cheese, the UN estimates that over 1.5 million head of livestock have already starved to death in this region. The UN estimates that 13 million people in the region are already “facing severe hunger.” Were you aware of that severe drought in the Horn of Africa? Most people in the western world are oblivious to it, but it has far-reaching consequences as it reduces the global food supply substantially.

Biblical prophecy warned that famines would be an increasing factor in the latter days of our current age (Matthew 24:7 and Revelation 6:5-6). Famines are an inevitable result of droughts, and Revelation 6:6 foretells that food supplies will be rationed both by amount and by price at some point in the latter days (the “scales” indicate amounts of food being dispensed carefully by weight and price-rationing is mentioned in verse 7). I mention the article, Are We Living in the Biblical Latter Days?, a lot, but that is for the benefit of recent readers of my blog. I realize long-time readers have already read it. Since we are entering a time when droughts all over the world are going to lessen the global food supply, it is wise to prepare for food shortages while it is possible to do so. My article, Should Christians Prepare for Future Hard Times?, gives practical and biblically-based guidance for making such preparations. There is still time to prepare for reduced food supplies, so it is common sense to obtain a food reserve for you and your family before prices escalate even higher.