WERE THE NAZIS CLOSER TO AN A-BOMB IN WORLD WAR II THAN PREVIOUSLY THOUGHT? 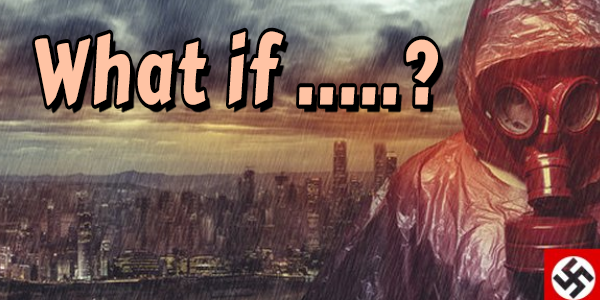 A few days ago, I noticed a short article in a copy of the Minneapolis Star and Tribune reporting that new discoveries have indicated that the Nazis were closer to developing a successful nuclear reaction during World War II than has previously been realized. While doing a web search, I found the same article as a Washington Post story (see first link). It cites the existence of 664 2-inch cubes of uranium that were in Nazi hands during the war. The Nazis tried to create a nuclear reaction with them, but the experiment failed. The first link cites an article in Physics Today, which offers an in-depth story about the real extent of the Nazi nuclear effort. It documents the Nazis’ flawed management of their nuclear program and its resources.

The Physics Today article is included as the second link, and it indicates the Nazi experiment failed because the Germans made a huge mistake in their nuclear research program. Rather than pool all their domestic resources, skills, etc. in one nuclear effort, they divided their limited resources, scientists, etc. into three separate teams which each had to compete against the other teams for scarce uranium supplies, technical equipment, etc. Unlike the American Manhattan project which pooled all possible American resources and know-how into one cohesive team to quickly create a nuclear reaction and a subsequent nuclear bomb, the Germans guaranteed the failure of their project because of a foolish decision to not pool their nuclear technicians, uranium supplies, etc. into one coordinated team. Amazingly, the Germans started their nuclear research project two years before the American Manhattan project got started, so the Nazis actually had a two-year head start on the Americans. If the Germans had pooled all their research teams and nuclear resources together in one program, they would clearly have made much quicker progress in developing nuclear reactions and nuclear bombs. Imagine how history would have been different if Germany had had an efficient nuclear program which developed and used an atomic bomb in warfare before the USA did so.

The second link reports that one German nuclear reaction experiment failed because they had only 664 uranium cubes, an insufficient amount to sustain a nuclear reaction. An American investigation of the German atomic program concluded that the Nazi program “might have worked if the Germans had put 50% more uranium cubes in the core.” Those additional cubes did exist but were in the hands of one of the rival German nuclear teams. A 50% increase in the 664 cubes total experiment would have required an additional 332 uranium cubes. The other teams had at least 400 known such uranium cubes, so if they had all been under the management of a single team, the Nazis experiment to create a sustaining nuclear reaction likely would have succeeded. As the article states “The combined inventory [of uranium cubes] would have been more than enough to have achieved criticality…(emphasis added).” It is not clear what happened to all the German uranium cubes after the war. The USA took custody of some of them, and other sources “suggest that the majority of the cubes eventually ended up in the Soviet Union” (emphasis added). The word “suggest” in that sentence means that it really isn’t known for sure where the uranium cubes all went (or the precise number of how many actually existed). The link documents that there was a black-market in uranium cubes after World War II, so some may have ended up in the hands of other nations or non-state entities.

It is remarkable that the Germans created such an unwieldy and very inefficient nuclear program that ultimately defeated their nuclear weapons project. The Nazis had technological successes in many other areas of modern weaponry in World War II. They developed the world’s first cruise missiles, the first ballistic missiles, the first jet warplanes, etc. Their tanks were far superior to the tanks used by the allies on a one-against-one basis. The Tiger tank was perhaps the first true Main Battle Tank the world had seen. The Nazis simply lacked the resources to make sufficient numbers of these weapons to turn the tide of the war.

Personally, I think that on several occasions, God confused the mind of Adolf Hitler to make self-defeating, militarily-stupid decisions and that God did so to make sure the Axis powers lost the war. Creating an extremely inefficient program to develop nuclear weapons was just one such decision; there were many others. Some of Hitler’s decisions that immediately come to mind which badly hurt the Nazi war effort include: (A) his invasion of the USSR which diverted massive amounts of German war resources to an unnecessary eastern front and turned Russia into an ally of the British and Americans, (B) his declaration of war vs. America after the Japanese Pearl Harbor attack which meant that the USA would be pulled into the European War vs. the Nazis, (C) going to war with too few submarines and no heavy bomber, (D) his refusal to allow front-line commanders to make strategic withdrawals (which led to hundreds of thousands of German soldiers being taken as POWs when the Africa Korps surrendered in North Africa, many more surrendered when trapped in the Falaise Gap in France after D-Day and when a large German army was wasted trying to take Stalingrad. I’m sure readers can think of other examples as well.

The minds of national leaders are at all times in the Creator God’s hands to turn them one way or another (Proverbs 21:1) to ensure that they make decisions that will keep human events on a path consistent with his biblical prophecies. God himself asserts that he will direct the destinies of nations and all mankind to make sure his prophecies are fulfilled (Isaiah 41:21-26, 42:9, 46:9-11). Readers of my books and articles and listeners to my audio messages available via the home page of my website already know of many biblical prophecies which God fulfilled over the millennia. God made sure that the aftermath of World War II would set the stage for the fulfillment of his prophecies in the latter days of our current age. Critics of the Bible often try to dismiss the fulfillment of biblical prophecies by claiming all such prophecies were “written after the fact.” However, that argument fails utterly when evaluating modern world events that fulfill biblical prophecies for the latter days. Scholars know the many biblical prophecies about the latter days were written millennia ago as they have existed on ancient texts and Torah Scrolls since ancient times. If you would like to see a list of biblical latter-day prophecies which have come to pass in our modern time, please read my article, Are We Living in the Biblical Latter Days?. If you would like to see some very specific biblical latter-day prophecies describing future major global events and a climactic World War III that will end our current age, please read my articles, Is Babylon the Great about to Fall…Ushering in a New Beast System? and What Ezekiel 38-39 Reveal about a Future World War III.