WAS A SCULPTURE OF ANCIENT ISRAEL’S KING AHAB FOUND? 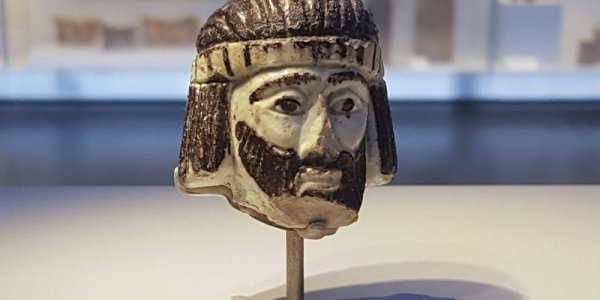 At an archaeological site in Israel earlier this summer, a remarkable discovery was made. A small sculpture of a man’s head with features indicating a king’s appearance was unearthed in the ancient Israelite city of Abel Beth Maacah, mentioned several times in the Bible as a city in the northern region of the ancient northern kingdom of Israel (I Kings 15:20, II Kings 15:29). Based on some biblical reference sources in my library, the city of Abel Beth Maacah was located in the northern region of the territory of the tribe of Naphtali. The three links below indicate that the sculpted head may depict the ancient Israelite King Ahab–although one link suggests it may be King Jehu. However, due to its being in the northern portion of the kingdom of Israel, it may even depict the head of a king of Tyre or Syria. It clearly does depict a bearded Semitic head, and the first link reports that radiocarbon dating of the location where the artifact was found indicates a date of 902-806 BC would be an accurate time frame for it. This would put it in a time frame where the ancient city was in Israel’s kingdom.

The aforecited radiocarbon dating range would include the reign of King Ahab, who was married to the exceptionally wicked Queen Jezebel who was originally part of the royal house of Sidon (I Kings 16:28-31). A date near the beginning of the radiocarbon dating range would place the artifact just a few years or decades after the division of the United Kingdom of Israel into two often-warring kingdoms: the southern Kingdom of Judah (the Jews) and the northern Kingdom of Israel (the Israelites of the ten tribes). These two kingdoms fought a disastrous civil war soon after their division in which 1.2 million men were engaged as the Jewish Kingdom fought the Israelite Kingdom and there were over 500,000 killed in the battle (II Chronicles 13). This terminology might sound a bit jarring to readers who do not realize that the terms “Judah” and “Israel” are not biblical synonyms. From the time of the divided kingdoms through the exile of both the Jews and Israelites into modern prophetic times, the term “Judah” refers to the Jews (and Israelis in modern times) while the term “Israel” refers to the descendants of the ten tribes of Israel. Please refer to my article, Four Reasons the Jews are Judah, for related information on this topic. I Kings 14 is another biblical chapter which describes the ongoing warfare that occurred between the northern Israelite kingdom and the southern Jewish kingdom under their respective initial kings–Jeroboam of Israel and Rehoboam of Judah.

In later centuries, the people of both the northern and southern kingdoms were exiled from the ancient Holy Land. Many Jews were taken captive to Mesopotamia by the Assyrians in the time of King Hezekiah of Judah (II Kings 18:13)  and the remainder of Judah’s people were taken captive by the Babylonians under Nebuchadnezzar circa 576 BC. The descendants of the northern kingdom were more numerous and they went into exile in several waves. The tribes of Gad, Reuben and the half-tribe of Manasseh (these tribes lived in “Gilead” west of the Jordan River) plus the tribe of Naphtali were carried captive to Mesopotamia in the middle of the 8th century BC. This wave of captivity is described in II King 15:27-29, and it specifically mentions the city of Abel Beth Maacah, in the ruins of which was found this sculpted head of a possible Israelite King, as one city whose inhabitants were then taken captive. In approximately 721 BC, the Israelites who chose to oppose a later invasion of the Assyrians were taken captive when Samaria, the Israelite capital, fell after a long siege.  However, the Bible says nothing about where or how the other approximately 2/3rds of the northern kingdom’s Israelites left their homeland other than to affirm they had all been exiled (I Kings 17:1-18). Secular history has information preserved that indicates many Israelites, seeing the end of their kingdom was near, fled in a wide variety of directions to avoid an Assyrian captivity. Many do not realize that the ancient kingdom of Israel was the lead partner in what is known as the Phoenician Empire, which was an alliance of Israelites, Sidonians, inhabitants of Tyre, etc. that began in the reign of King David of Israel and King Hiram of Tyre (I Chronicles 14:1-2), was cemented during the reign of King Solomon (II Chronicles 8:18-9:28), and continued through the reign of King Ahab, who married a Sidonian princess, Jezebel. When the northern kingdom’s end was imminent, its citizens had many destinations within the Phoenician Empire to which they could flee. Many traveled a short distance to the Phoenician colony later called Carthage (by the Romans), others went to Spain (Iberia), the British Isles (where the Phoenicians had long had mining operations), and a large mass migrated northward by land to the region of the Black Sea, becoming known afterwards as the Scythians or Goths. These groups, though exiled, remained free and independent in their new homelands. Carthage and Scythia became independent empires in their own right. Those Israelites who had been carried captive by the Assyrians later rose to great power as the Parthian Empire, which lasted from circa 250 BC to 227 AD. Some of the Israelite nobility of Parthia became known in the Bible as the Wise Men who visited the Christ-Child in Matthew 2. Just before the Israelites went into exile, Hosea 1:10 mentions a prophecy of God that their numbers would vastly increase after they went into exile to new homelands. It was prophesied by God to David via the prophet, Nathan, that God would eventually relocate the Israelites out of their homeland in the Holy Land to new places in other location around the world (II Samuel 7:8-11). The relocation of many groups of Israelites to many locations around the world when they went into exile fulfilled that prophecy.

While biblical narratives do not give us specific information about many of the locations to which the Israelites were exiled (that information was preserved in ancient secular histories), the prophet Daniel does refer to the widespread relocation of the Israelites as a fact. In Daniel 9, Daniel is confessing the sins of both the southern and northern kingdoms and he accurately refers to Judah and Israel as separate entities in verse 7. Daniel states of Israel, the descendants of the ten tribes, that they were scattered into a wide variety of locations–some of which were “near” to Daniel’s location in the Mesopotamian/Persian region and others which were “far” away in other regions of the world.

My books examine, in great detail, the separate migrations of the Israelites away from their old homeland in the Holy Land as well as the new kingdoms and empires they founded in their new homelands. This information can be found in my 4-book set of printed books and my E-book, The “Lost” Ten Tribes of Israel…Found!, both of which can be obtained via links at the home page of my website. These narratives are abundantly documented in chapter endnotes and bibliographies in my books, are also featured in several hours of live radio interviews on Israel National Radio and are also the subject of several of my presentations to live audiences which can be accessed for free via the links at my homepage or via the “speeches” link. Once you know the true history of the ancient tribes of Israel and the nations and empires they founded after their exile from their former Promised Land to their current locations you will have an entirely new and refreshingly relevant view of both ancient history and modern geopolitics.