WAS A PLANETARY CONJUNCTION THE “STAR OF BETHLEHEM?” 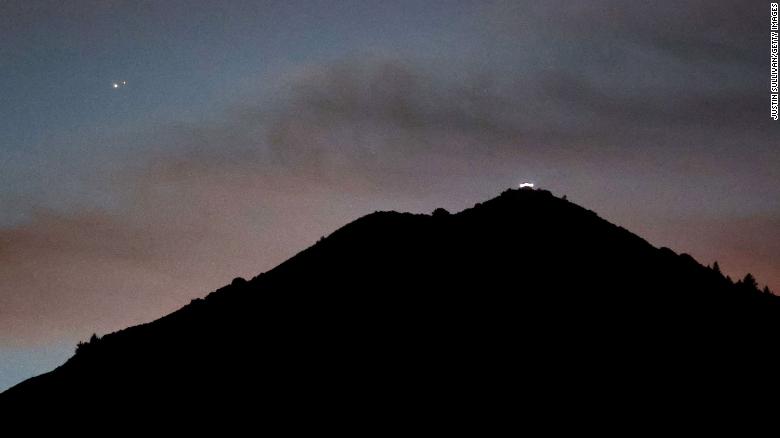 Every year at this time, there is always a spate of articles, links, etc. which assert or speculate that a planetary conjunction or some kind of celestial event was the “Star of Bethlehem” which guided the “Three Wise Men” to the very young Christ-child in Judea. This year has seen a larger than normal number of such articles due to the very rare and spectacular conjunction of the planets Jupiter and Saturn in our night-sky. It is truly a marvelous astronomical phenomenon. I’ve been watching these two planets steadily draw closer together in the night-sky for some time now. Also, for star-gazers, you should also have seen the reddish planet Mars high in the sky overhead.

No doubt, people who follow the Zodiac (or the Mazaroth as it is called in Hebrew) must be having a field day drawing omens and portents form such an active night sky. They will see meaning in these planetary positions and also in which constellation they are present while they are viewed. I claim no knowledge of how to draw meaning from such things, but I do not dismiss the possibility of there being a special meaning in these planetary positionings. Genesis 1:14 asserts that the heavenly bodies will sometimes be “for signs and for seasons” so this allows for the possibility that the great conjunction of Jupiter and Saturn may prove to have some significance for our time. We are deep enough into the biblically-prophesied “latter days” of our age that the presence of heavenly “signs” could logically be expected. However, God has sent no prophet who can tell us what this major planetary conjunction means, if it indeed has a prophetic meaning.

What I will assert firmly is that no conjunction of Jupiter and Saturn (or any other celestial event) could have been the “Star of Bethlehem” which led the Wise men to the Christ-child. There may well have been some celestial event at the time, but no object in the night sky could do what the “Star of Bethlehem” did in the biblical accounts. This “star” appeared to the Wise Men, but apparently none of Herod’s astrologers has seen anything unusual in the night-sky (Matthew 2:7). Herod wanted to know from the Wise Men when this star appeared to them. If a major celestial event had appeared in the heavens at that time Herod’s astrologers would have already known the exact day on which any major such event was first seen. Herod had to “diligently” inquire of the Wise Men about when this “star” appeared to the Wise men because Herod’s astrologers had no such information to give Herod. Consider also that any major celestial event in the night-sky would have hovered so high above the earth that it would be equally seen all over the northern hemisphere at the same time. There is no way any such event could lead the Wise Men or anyone else to a specific city (Jerusalem) on earth because the celestial event would appear to hang over every city on earth at once that could see it! I have written extensively about the “Star of Bethlehem” and the Wise Men/Magi who were led by this mysterious “star” not only to a specific city but also to one specific baby who was the Christ-child.

The Wise Men/Magi were high-ranking noblemen from the Parthian Empire which was then ruling over South-Central Asia (Persia, Mesopotamia, etc.). The Parthians were the Israelites who had been exiled into Persia and Mesopotamia centuries previous to the time of the Wise Men. The Parthian Empire fulfilled a prophecy in Isaiah 14:2 that the exiled ten tribes of Israel would eventually rise to an empire status, ruling over all the empires and kingdoms that had oppressed them and held them captive. Assyria, Babylon and Persia had all held the ten tribes of Israel captive over a period of centuries, but the Parthian Empire ruled over all those peoples during the time of the Wise Men. As my book, Parthia–The Forgotten Ancient Superpower, notes, the contemporary historian/writer, Josephus, knew the Parthians were the ten tribes of Israel and identifies them as such in his writings. Many other proofs exist as well, and the evidence is all contained in my aforementioned book. The biblical accounts also do not state how many “Wise Men” were present in the caravan that accompanied them to Jerusalem to seek the Christ-child. The Bible does not limit their number to three, but that non-biblical number somehow came to be attached to their visit in the intervening centuries. The Wise Men’s caravan was massive, as Parthian nobility traveled with huge numbers of armed escorts, camp-followers, animal-handlers, cooks, etc. Their caravan was so large that it frightened the entire city of Jerusalem (Matthew 1:3). A likely answer as to how many Wise Men were present in the caravan and how large it was is offered in my book. This information is also found in my E-book, The “Lost” Ten Tribes of Israel…Found!

However, I’m not simply trying to sell you a book. The link below contains, in sequence, the various posts I’ve written on this topic over the years and if you scroll all the way to the bottom, you will find a link which includes all of my books’ content about the Wise Men and the early years of the Christ-child…given to you for free. I want everyone to have this information about this seasonal topic, and if the information intrigues you, you may obtain copies of my books at my website’s home page. My books contain a chronological and well-documented account about the ten tribes of Israel throughout all their migrations, empires and kingdoms throughout history. May you find this information to be valuable to you as we all have lots of time to read links, articles, books, etc. during this covid pandemic when many people are locked-down and wondering what to do with their time.