Walls Are Going up all over the World! 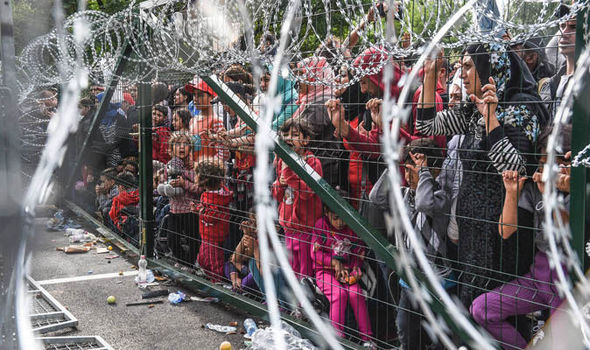 As the Leftist establishment media is in a tizzy about President Trump’s plan to build a security wall along the USA’s southern border to keep out illegal immigrants and drugs, let’s take a “global” perspective on the building of walls for national security purposes. Doing so will make Trump’s plans look downright mainstream.

The second link reports that Turkey is approximately half finished with a 511 kilometer wall along its southern border with Syria to keep Syrian refugees from spilling into Turkey. The third link offers a further perspective on the Turkish border wall. The Turkish wall is an example of an Islamic nation building a wall to keep illegal Islamic refugees out of its nation. There are more such examples. Saudi Arabia is building a “Great Wall” along its northern border to keep refugees from the Syrian civil war and the conflict in Iraq from spilling into its borders (fourth link). It is a very sophisticated wall with high-tech sensors to supplement an actual border fence. The Saudis are also stationing 30,000 border police to patrol the wall to keep out intruders. The Saudis are also beginning to build walls along its 1,000 mile border with Yemen to protect itself from infiltrators and illegals from coming into the Saudi kingdom from that direction. There is another example in the Mideast. Jordan has been building a wall along its border with Syria to keep illegal immigrants and ISIS infiltrators out of its kingdom (fifth link). Who is paying for Jordan’s border wall? The USA! It further notes that Presidents Bush and Obama approved the use of US funds to build a border wall to protect Jordan’s borders from illegals and terrorists who would seek to cross Jordan’s borders. It asks the obvious question: why it is OK for the USA to fund and build a border wall for Jordan’s security interests, but not OK for the USA to build a similar wall along the US southern border? The media does not cite the many examples of Islamic nations building security walls to keep other Muslims out of their nations.

We cannot forget the Israeli security wall which was built to stop Palestinians from crossing unchecked into Israel and perpetrating terrorist acts against Israelis. The sixth link reports that the Israeli security wall will extend a distance of 718 kilometers, and that it has reduced terrorist acts as planned. We should also not forget the extensive walls which protect the borders of the Vatican city-state (seventh link). One more thought on borders. Try to enter Russia, China, Iran, North Korea and many other nations on earth as an illegal person and see how welcoming they are to your unauthorized entry. Expect serious prison time or hard labor if you try to enter those nations without permission.

Building protective walls is a long-standing human security measure. The Bible and secular historical sources refer to many examples of city walls built to protect inhabitants and keep unauthorized “illegals” and invaders out of ancient cities. Many ancient cities in many nations had extensive city walls to protect inhabitants from invading armies and unauthorized persons. The greatest example of all is the Great Wall of China. Another famous ancient wall was Hadrian’s Wall built by the Roman Empire all across the territory of ancient Briton to keep the northern Celts and Scots out of the Roman portion of Briton. More examples could be built, but the above will suffice to make it evident that building security walls and fences is (and has long been) a standard procedure for all nations threatened by outsiders, invaders, illegals, floods of refugees, etc.

President Trump’s plan to build a security wall along the US southern border is in the mainstream of normal motives to protect one’s nation from external threats and dangers. Trump not only wants to keep illegal immigrants out of the USA, but also to screen those entering the USA at controlled checkpoints to ensure that those on terrorist watch-lists and drug-smugglers do not enter the USA. This is entirely a normal and reasonable national goal. Some of the costs I’ve seen for building a wall all across the USA southern border are, no doubt, exorbitant estimates. Trump is well-known for building things “on time and under budget.” Given the geography of the USA’s southern border, it would surely not be necessary to build a physical wall everywhere along the border. Some portions of the border have such rugged and forbidding terrain that they could be marked with a simple fence and guarded with 24/7 aerial drone monitoring, heat and motions sensors, etc. to quickly enable border security personnel to intercept any intruders.

Deuteronomy 28:43 prophesies that when nations forget God and his laws, “strangers” will proliferate in the land and be exalted over the resident citizens. This is happening not only to the USA, but to European and even Mideastern Islamic nations as cited above. It is normal for nations to protect their borders. President Trump is on the right side of national laws and practices and on the right side of history by building a security wall where one is sorely needed. It is so obviously necessary I think it is time to seriously question the motives and agendas of anyone who would oppose his efforts to protect obvious and long-neglected American security interests.

As you watch the media coverage of Trump’s implementation of his plan to safeguard American security interests by building walls and protective barriers on the American southern border, keep the above examples and precedents in mind.