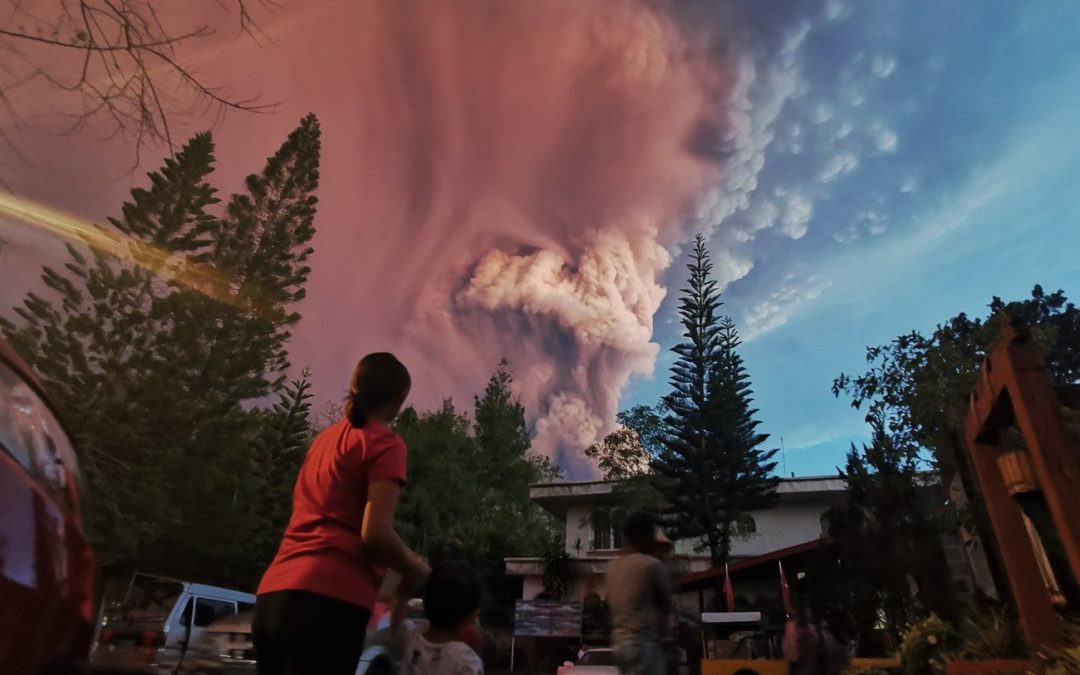 No doubt, all readers are familiar with the very large volcanic eruption taking place in a location not far from Manila in the Philippines. However, while this volcano is receiving almost all the publicity because it is causing damage near a major metropolitan city (Manila), there is a rash of major volcanic eruptions now occurring around the world that perhaps should cause us some concern. The first link and second link offer information about the many volcanic eruptions now taking place globally. The first link has a map showing where these major and minor eruptions are now taking place. It shows almost two dozen major eruptions now occurring all over the world in many far-flung locations: the Philippines, Indonesia, Japan, Alaska, several nations in Central and Latin America, Sicily, Africa, etc. Notice how many are now erupting in the “ring of fire” that encircles the Pacific Ocean.

The second link reports that major eruptions in Alaska, Peru and Mexico are all sending volcanic ash clouds 20-25,000 feet into the air, while the erupting Taal Volcano in the Philippines is hurling ash clouds 6-9 miles into the upper atmosphere. That link also cites the highly unusual number of earthquakes that are striking the island of Puerto Rico. The third link, fourth link and fifth link offer more information about the major eruption in the Philippines taking place just south of Manila, and they also offer some very impressive video images of the eruption. According to Philipino authorities, the eruption is now at a warning level of 4 on a 0-5 scale, which means that an even greater eruption could occur within hours or days. Much damage has already been done, and widespread evacuations are now underway to move people further away from the volcano in case it really “blows its top.”

The sixth link details the current eruption in Mexico of the famous Popocatepetl volcano near Mexico City which is sending ash 20,000 feet into the air. This volcano, if it spewed out a major eruption and lava flow, could do incredible damage to lives and property as the mega-metropolitan region of Mexico City is so near to it. The seventh link cites limited information from authorities in Buenos Aires about a South American volcano that is also experiencing a major eruption.

Why is all of this important? It is potentially very important as even a single massive eruption can cause sudden global cooling due to it sending so much particulate matter into the upper atmosphere which reflects sunlight and allows less heat to reach the earth’s surface. Such huge eruptions have caused “little ice ages” throughout history in Europe and other regions of the earth due to this effect, which causes food shortages and famines from shortened growing seasons. The eighth link lists many examples of such destructive events over the centuries during known historical periods. During low-tech times when the earth was not interconnected by communication links, it was not realized that a little ice age in Europe could be caused by a massive volcano in other parts of the earth such as the island chain we now call Indonesia.

The Bible’s prophecies warn that during the latter days of our age there will be a wave of increased seismic activity (Matthew 24:7, Luke 22:11). Luke 22:25 also warns of “the sea and waves roaring” in the latter days. That language would include tsunamis triggered by seismic activity, like the one that killed approximately 230,000 people in 14 nations in the Indian Ocean region in 2004. The ninth link contains some graphic photographs of that event. Seismic activity includes both earthquakes and volcanoes. Another relevant latter-day prophecy is found in Revelation 6:5-6 which prophesies that widespread food shortages on the earth will occur in the time preceding Jesus Christ’s Second Coming. That prophecy shows food being rationed by price due to the shortages, which argues that there will be a spike in the prices of many food items. Previous posts have detailed the warnings of food experts that the die-off of honeybees and other pollinators will eventually reach a critical stage where the harvests of many vegetables, fruits and nut crops will be greatly reduced–leading to shortages in all these foodstuffs. If the earth experiences a wave of huge volcanoes shortening growing seasons at the same time that the die-off of pollinators also causes major crop shortages, the entire earth may be affected by widespread food shortages. For abundant evidence that we now live in this critical biblically-prophesied time, please read my article entitled, Are We Living in the Biblical Latter Days?

Will the current wave of volcanoes lead to huge eruptions that will cause global cooling and resultant famines, or will they calm down and not have such a catastrophic event? We cannot predict the future of when the next huge climate-changing volcanic eruption will occur, but it is known that such huge eruptions cause food shortages due to the global cooling caused by volcanic effects upon the upper atmosphere. We do not know when the biblical prophecies about a wave of global seismic events affecting the earth in a catastrophic way will occur, but the current wave of global volcanoes is already acting to fulfill the prophecies of Matthew and Luke cited above. At some point, volcanoes, pollinator die-offs, droughts and perhaps other events will cause the global food shortage crisis prophesied in Revelation 6.

One thing we know for sure. When the next super-volcano occurs and causes global cooling, the “climate change” crowd will have to shift gears from warning about “global warming” to a very real crisis of “global cooling” that could affect the earth for years.

My thanks to a reader who drew my attention to this issue by sending me one of the links cited in this post.