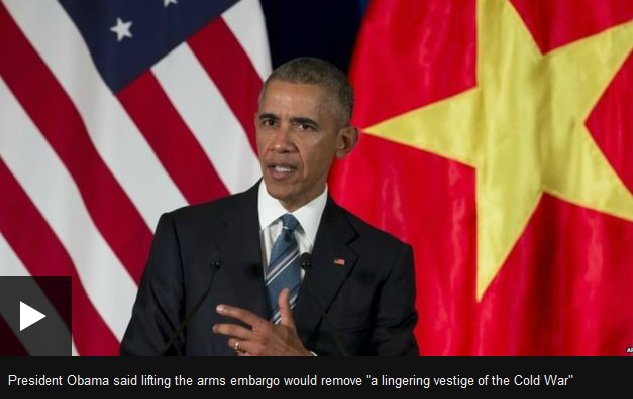 Did you notice that during the recent visit by US President Obama to Vietnam that the US lifted its embargo on selling lethal military weaponry to Vietnam (first link and second link). One link states that Vietnam can now buy a “full range of US weapons and military equipment,” but the other reports that this will not include the sale of “sophisticated weapons” to Vietnam. Whatever the back-room deals were, this is a watershed event in US-Vietnamese relations and it has major ramifications for the geopolitical situation in the South China Sea. One link asserts that this places Vietnam in an alliance led by the USA and Japan to “contain China,” while the statement can also be found that this development is “not related to US policy on China.” Sure. I guess that statement was made for diplomatic “cover,” but the fact remains that China is the obvious common potential enemy of both Vietnam and the USA. The truth is that Vietnam needs US weaponry to deter Chinese aggression and the US (and many other Pacific nations) need Vietnam in an anti-Chinese alliance.

Many may have forgotten that Vietnam’s most recent “hot” war was not with the USA, but with China (third link). In 1978-1979, over four years after the US-Vietnamese war ended, China invaded Vietnam and the combat was very intense during this short war. China invaded Vietnam with 80,000 troops, boasting it would take Hanoi in a very short amount of time. It didn’t work out that way. Vietnam repulsed the Chinese invasion, and it is estimated that 50,000 soldiers died in this short but very intense war. That level of combat was far more intense than the combat losses incurred during the US-Vietnamese war in the same length of time. It is embedded in Vietnam’s memory that the USA never invaded what was “North” Vietnam, but China has done so and could do so again. The fourth link was written a couple years ago, and Vietnamese-Chinese relations have steadily deteriorated since that time due to tensions in the South China Sea as China becomes more militarily aggressive.

I don’t often agree with President Obama’s policies, but I do support this rapprochement with Vietnam. I believe it also has biblically prophesied support. Vietnam is being drawn into the anti-China alliance due to necessity as it is increasingly threatened by China’s growing military power on land, sea and air. China has militarized a number of artificial islands in the South China Sea and continues to prepare them to serve as naval and air force bases to support China’s claims of sovereignty over the South China Sea. The USA, Japan, Taiwan, Singapore, South Korea, the Philippines, Australia, India, Indonesia, etc. have been relatively slow to respond to this Chinese action with substantive counter-moves.

Once China believes it has sufficiently placed enough aircraft, naval warships and missiles on its artificial islands, China could declare an ADZ (an “Air Defense Zone”) over the South China Sea and even demand that ships and airplanes traversing that large body of war obtain Chinese transit permission, pay a transit tax, etc. as China formally asserts sovereignty over virtually the entire South China Sea. When and if that happens, the anti-Chinese coalition will have to make a choice: (A) meekly submit to China’s demands or (B) go to war to stop China’s sovereignty grab over a very important body of what has been international waters for free commerce. No one wants to discuss this very much, but that is likely where this confrontation is headed. In previous posts, I have suggested that China actually wants a regional war in the South China Sea so it can test all its new combat weaponry in actual wartime conditions and that it especially wants to see if its new weaponry designed to sink US aircraft carriers can actually sink them. If such a war occurs and the US inevitably sends aircraft carriers to the region as part of a regional war, we will see if China can sink US carriers or not. If the USA has neglected its carrier defenses and the US loses one or more carriers or major surface combatant ships, China will replace the USA as the globe’s respected military heavyweight. If the US can successfully defend its carriers from Chinese cruise- and ballistic-missile salvos, American dominance will continue. What happens domestically inside the USA will depend on whether the US can defend its aircraft carriers or not if such a war occurs. There will be a political earthquake inside the USA if the US Navy loses an aircraft carrier to China due to American neglect of its military forces under President Obama.

For years, I have written in articles and posts that Ezekiel 38 prophesies that a group of Pacific Rim nations between an arc of nations between India and Japan would form an alliance united by their opposition to China (and also Russia as Russia is a strategic ally of China). This alliance foretold by the prophet Ezekiel circa 2500 years ago is still being steadily fulfilled in the modern world, confirming that the Creator God who inspired the prophet Ezekiel is implementing this prophecy today. It also confirms that we are living in the latter days of our current age on earth, as this prophecy would only be fulfilled during the “latter days” of our age. To see a detailed examination of how Ezekiel 38’s prophecy involves these Pacific Rim nations, please read my articles, What Ezekiel 38-39 Reveals about a Future World War III, and Japan’s Role in Biblical Prophecy. It would also be helpful to read my article, Are We Living in the Biblical Latter Days? to examine many biblical prophecies confirming that we are, indeed, living in the biblically prophesied “latter days” and that we can be confident that the Bible reveals many details of what is going to happen on earth in the time between the present and the climax of the latter days at the end of our age.