Very Odd Collision Between US Warship and Pilipino Container Ship 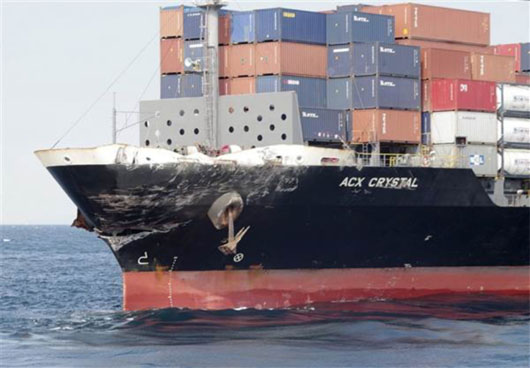 Many readers have likely read of the very odd collision between a Pilipino-registered container ship and a US navy warship near Japan. The more I learn about this episode, the odder it seems so I thought I’d share my thoughts with readers about this matter.

We do know that a US warship and a Pilipino-crewed container ship collision occurred recently in which seven US sailors were killed and the US warship sustained major damage. Some early reports credited the crew of the warship with very capable efforts to save the ship from sinking. The first link and second link contain information about this odd collision. The collision reportedly occurred at nighttime in clear weather conditions and in a heavily-traveled maritime route. There was an inexplicable delay from both ships in reporting the collision to shipping authorities, and the second link raises the question of whether there was anyone on duty in the container ship’s bridge and whether an automated navigation program on it could have been hacked to enable the container ship to ram the US warship (that would make the collision an act of terrorism). Ongoing investigations will examine these and many other issues in detail I’m sure.

However, I’m going to raise issues that I have not seen raised in any media article to date. How in blazes was a slow, lumbering, huge container ship able to ram a quick and nimble US warship? It begs the question of whether anyone was on duty in the US warship’s bridge the night and time of the collision. A US warship traversing a heavily-traveled maritime shipping lane should have had (A) a radar operator on duty checking for the radar signatures of any nearby ship to avoid such collisions, (B) at least two sailors on duty with binoculars to have “eyes” on all surrounding vessels to make sure such a collision didn’t occur in case of electronic systems failure, and (C) an Officer of the Deck or a Duty Watch Officer of some kind to make sure that (A) and (B) were being competently performed. If any of these three essential duties were being performed properly that night, I don’t see how this collision could have happened.

Consider this fact: there is nothing stealthy about the radar signature of a huge container ship. On the state-of-the-art radar systems of a US Aegis warship, the container ship’s radar signature would be about as hard to miss as an elephant walking around in your living room. That no alarm was issued argues that there was no one on duty at the radar station that night. As the large container ship neared the navy ship, crew look-outs should have been able to easily see the container ship and issue warnings to take evasive action. A US Aegis warship is quick and agile. With any warning at all, it could easily have changed its course heading and avoided the collision. Was no one watching the radar or watching with any binoculars that night? If not, it was major dereliction of duty. Were there incompetent officers on the US warship that didn’t set a proper watch to make sure no collision occurred? Other reports indicate the Captain was not on duty and was sleeping in his quarters. The officer on duty should have made sure this collision didn’t happen. Did the radar operator, the duty-watch sailors and the officer in charge all abandon their duties simultaneously? If so, what was it that was so interesting to them that they all abandoned their duties at the same time? Or did a member of the crew on duty that night somehow facilitate the collision in an act of sabotage or terrorism? These are just some of my questions.

Tragically, seven sailors are dead, their families are grieving and the US government has just been saddled with unexpected repair costs to a very vital and expensive warship at a time when defense dollars are already strapped. Simple competence by the warship’s duty crew would have made such a collision impossible. Serious investigations must uncover the truth of what happened so corrective action is taken and it never happens again.

The final link illustrates how the US military is understaffed and overburdened with too many missions for its reduced size. It was sent to me by a friend, but it is related to the military subject of this post so I’m enclosing it for readers to review.