USA’S SURRENDER IN AFGHANISTAN WILL HAVE MAJOR GEOPOLITICAL IMPACTS 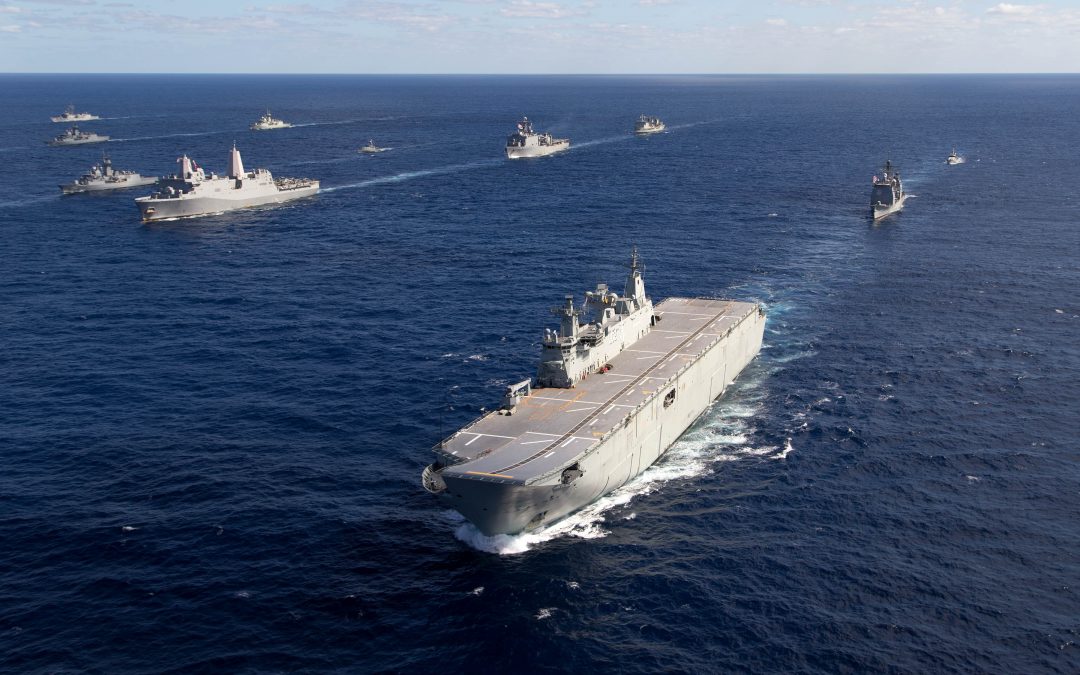 I’m sure readers experienced the same sense of shock as the rag-tag Taliban defeated the mighty United States of America which is now “led” by Joe Biden. The depth of surrender by Joe Biden’s administration is truly amazing. It is equally incredible that his Pentagon and military advisers and commanders knew so little about military strategy and tactics. Biden was so weak that he meekly submitted to the Taliban’s deadlines and Biden didn’t even have enough backbone to extend the withdraw deadline so American citizens, allied citizens and Afghan “friendlies” could get out. Biden should have told the Taliban we are leaving but it will be under our own terms, not yours. Biden and his military leaders seem to have had no contingency plan for handling the situation when the corrupt Afghan government inevitably collapsed. When Afghan political leaders fled the country, the Afghan army predictably disintegrated.

Biden should have told the Taliban to cooperate in our withdrawal and, in response, we’d let them live. Remember when President Obama said ISIS could not be defeated for many years? President Trump said he would “bomb the hell out of ISIS” if he was elected, and he did just that. ISIS quickly lost all its territory when confronted by a US president with a backbone, and much of the Mideast was liberated from ISIS occupation or threats. Biden should have told the Taliban we’d have B-1s and B-2s on-station overhead and that they would quickly annihilate Taliban strongholds if the Taliban interfered with or hindered our withdrawal plans. The scale of Biden’s incompetence is breathtaking. The first link is a list of the massive amounts of US military equipment abandoned to the Taliban. Media articles have estimated that $70-90 billion of US military equipment was simply handed over to the Taliban, courtesy of the spineless Biden administration. The USA should have retained control of the huge Bagram Air Base and relocated our military equipment there to evacuate it on our huge air transports over a period of weeks and months. If some US arsenals were too remote to bring to Bagram AFB for evacuation, those arsenals should have been destroyed to make sure the equipment did not fall into Taliban hands. Surely, the Taliban will share this windfall of US military equipment with Pakistan, Iran and Communist China. India must be infuriated at Biden’s decision to arm India’s enemies with a windfall of US military equipment. Just look at the massive amount of US military equipment listed in the first link that Biden “gave” to the Taliban. Biden gave away much equipment that should have been removed to become US reserve equipment for the US military. Sadly, Biden and his military leaders did virtually everything wrong that could be done wrong. Biden’s performance is so horrific in its consequences for America’s security that one has to ask the question: Whose side is Biden on?

It also needs to be asked whether Biden has sufficient cognitive skills left to even know what he is doing or what is being done in his name. I’m sure many readers have seen the numerous examples being aired on the internet showing Biden bungle his sentences, lose his mental focus, etc.  If he is in the process of going senile, who is actually mismanaging the US government at the moment? Concerning Biden’s competence, consider the video in the second link, which shows Biden apparently dozing off during a meeting with Israeli Prime Minister Bennett. There is no shortage of Leftist/establishment media sources which assert that he really wasn’t sleeping, but he clearly has his eyes shut and his body and facial expressions are unresponsive at a time when he should be very much engaged and alert with the leader of an important American ally. I suggest you view the video and see if you believe he is “out of it” in the middle of an important meeting. Either Biden fell asleep during the meeting or he was treating Israeli Prime Minister with deliberate disdain. I don’t see a third alternative.

Let’s look at some of the major consequences of Biden’s failures of leadership. China is selecting this moment of epic US weakness under Biden to assert further their take-over of the South China Sea, even though International Maritime Law forbids China to take such action.  China has arbitrarily declared that it has the right, starting in September, 2021, to restrict and control international maritime traffic through the South China Sea. It arrogates to itself the right to inspect ships passing through that international body of water, restrict cargoes to be shipped on civilian merchant ships, etc. China is, in essence, declaring an intention to annex this massive body of international water. The third link and fourth link detail this action, and one of them reports that the majority of India’s maritime trade passes through the area that China now claims to control.  In declaring it has the right to control India’s merchant marine traffic (and that of many other nations), China has moved closer to declaring war against much of the rest of the world. My previous post examined the unprecedented bilateral talks between Japan and Taiwan in creating a joint front to oppose Chinese militarism. This action outrages China and both nations knew it would outrage China but they did it anyway. This shows that Japan and Taiwan have tacitly sent the message that any attack by China on Taiwan will be considered an attack upon Japan as well.

The Quad nations (the USA, Japan, India and Australia) and various smaller Indo-Pacific nations have been assembling a de facto alliance against China’s militarism as well. Indeed, these four nations plus many smaller nations either are or will be conducting major naval maneuvers in the Indo-Pacific region this month and next month. The fifth link lists the nations and ships that will be participating in these naval exercises, and the link includes impressive photos of the ships in the assembled fleets. In addition to the Quad nations, the various naval exercises will include ships from Indonesia, the Philippines, Palau, Singapore, Sri Lanka, Vietnam, Malaysia and New Zealand. It is China’s militaristic threats and hegemonic actions which are pushing this assortment of nations together in an ever-growing alliance to seek mutual protection against China. In the link, you will see references to Japan’s “helicopter destroyers,” but that terminology is a concession to Japan’s outdated pacifist Constitution. These ships are, in reality, “flattop” aircraft carriers that can handle modern F-35 warplanes.

The sixth link examines many aspects of how Biden’s evident weakness in Afghanistan has emboldened NATO’s rivals and weakened the resolve of the NATO nations. Russia and Belarus are going to conduct very large air-sea-land military exercises along NATO’s eastern frontier which are clearly intended to pressure NATO, and the link states the Russian pressure on NATO is intensifying due to Biden’s weakness. The link especially notes the insecurity of Poland and the Baltic states on NATO’s eastern frontier. In posts over the years, I’ve discussed Germany’s glaring military weakness. In light of Biden’s abandonment of Afghanistan (apparently with little or no consultation with NATO allies who also had forces there), Germany and many other European NATO nations are going to have to “get serious” about beefing up their military forces because they cannot trust America’s willingness to defend Europe and its other global allies as long as Biden’s administration is in charge of America’s foreign policy. The seventh link states that Biden’s swift surrender in Afghanistan has “visibly shaken the confidence” of European NATO nations in the USA. The seventh link also examines the rift between Europe and the USA caused by Biden’s chaotic exit from Afghanistan, and the language of the link hints that Europe’s leaders may now be wishing for the days when Trump was president. It notes that European leaders see Biden’s lack of consultations with them about the hasty Kabul withdrawal as expressing Biden’s “contempt” for European NATO nations who had helped the USA in Afghanistan.

One additional tidbit of information has been reported in the aftermath of Biden’s debacle in Afghanistan. The eighth link reports that the USA actually had specific intelligence reports that a terrorist was about to detonate a huge bomb near the approaches to the Kabul airport and that a US drone was “locked” on the terrorist. Reportedly, the US drone could have killed the terrorist and prevented the massive bomb attack that killed 13 American soldiers and killed and wounded a large number of Afghans. The link reports that Biden would not give the order to kill the terrorist and save the US troops. How is this not an impeachable offense if the report is true?

There is another very major ramification that will result from Biden’s panicky surrender and retreat from Afghanistan. There are many US allies who have not developed nuclear weapons because they felt secure dwelling under the US nuclear “umbrella” which protected them. In light of what happened in Afghanistan, many American allies must be having very confidential, high-level discussions about whether they now need to develop their own nuclear weapons programs due to the unreliability of the USA under Biden. This is such a sensitive issue that no nation would admit these discussions, but their national security is now at risk as never before. With an apparent dotard in the White House, they have to be considering this issue with a sense of urgency. Such efforts may already be underway. The ninth link was a previous post I wrote at this website about a possible joint secret nuclear weapons program between South Korea and the United Arab Emirates (UAE). I also wrote a previous post that Japan may already have developed the components for its nuclear weapons and could assemble them quickly if necessary (tenth link). I can think of a long list of nations threatened by China, Russia or Iran, and these threatened nations may decide they need to either secretly develop or buy nuclear weapons. This list could include any of the following nations: Japan, South Korea, Australia, Singapore, Poland, Turkey, Germany, Egypt, Saudi Arabia, The UAE, etc. After the graphic display of either incompetence or cowardice by the Biden administration in Afghanistan, the world is going to become a more dangerous place as the USA is not now a predictable or reliable ally. I think the USA’s credibility has never been at a lower ebb than it is right now. The world needs the USA to have vigorous, pro-American leadership right now; however, no such leadership now exists.

The trends described above are very consistent with what was predicted in biblical prophecy over 2500 years ago in the book of Ezekiel. Chapters 38-39 of that book accurately foretold there would be an end-time alliance including Russia, China, Iran, etc. which has been dubbed the “Gog- Magog” alliance. They will be the aggressors in an age-ending World War III which will begin when they attack the USA, NATO, and all their global allies. The Bible has other prophecies which also pertain to this age-ending World War III, and they are all detailed in my article/research paper: What Ezekiel 38-39 Reveals about a Future World War III. Another article I wrote (in 2007), Japan’s Role in Biblical Prophecy, adds additional biblical commentary concerning Japan’s growing prominence in the alliance opposed to China. The USA’s role in these end-time events is examined in my article, The United States of America in Biblical Prophecy. Offering strong evidence that we really are living in the time when the Bible’s age-ending prophecies will be fulfilled is my article, Are We Living in the Biblical Latter Days? If you read these items, I think you will marvel at how accurate and reliable biblical prophecy really is!