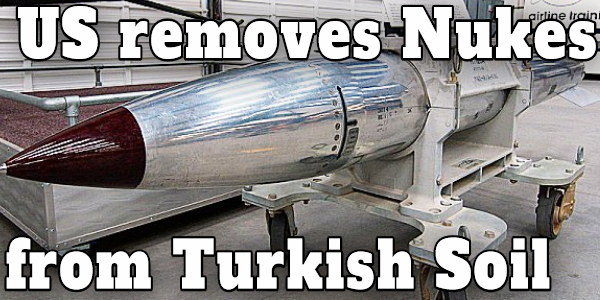 Major events are occurring in the Eastern Mediterranean region on the southeastern flank of NATO. In my previous post, I discussed the “nuclear sharing” agreement between the USA and several NATO nations that allowed delivery of American nuclear weapons in a war situation. Such nations obviously have to possess warplanes large and capable enough to deliver such weapons–not all NATO aircraft are capable of transporting and delivering these nuclear weapons. A very timely report has just come to my attention, from a reader, who forwarded a link that reports the USA has just moved its nuclear weapons out of Turkey to new bases in NATO ally, Romania (first link).

I’m sure readers are aware of the growing rancor between the USA and Turkey over Turkey’s decision to buy a Russian-made air defense system designed to shoot down American and NATO warplanes. In doing so, Turkey has strongly signaled that it is on the way out of NATO as there is no way NATO can trust Turkey if it completes this new military agreement with Russia. So far, neither side is budging in its position. The first link shows that the USA is sufficiently convinced that Turkey may, indeed, be leaving NATO. By removing its nuclear weapons out of Turkey and transferring them to Romania, the USA is taking a wise precautionary move to make sure these nuclear weapons did not fall into the hands of Turkey if Turkey becomes a turncoat to its NATO allies. Romania is clearly a loyal NATO ally as it is hosting an American-made Aegis Ashore air defense system which can down enemy warplanes and missiles. The loss of Turkey from the NATO alliance would be a major blow to NATO (and a big success for Putin), but if Turkey’s leader Erdogan is determined to ally himself with Russia vs. the USA and its other NATO allies, it cannot stay in NATO. Whatever Erdogan is thinking, he is likely to find that once you invite the Russian bear into your nation, it will intend to stay. Erdogan may find himself becoming a subordinate vassal of Russia, much the same as Syria’s Assad now is.

Russia’s strategic goal is clear. If it pulls Turkey into its orbit, it’s Black Sea fleet has easier access to the Mediterranean Sea, and Russia would effectively control a large swath of the Mideast from Syria and Turkey on the west to Iran and Iraq on the east.  Hezbollah in southern Lebanon would also be in this orbit. Besides moving nuclear weapons out of Turkey to protect them, NATO needs to take precautionary measures to prepare for Turkey’s apparent exit from NATO. Evidence exists that this is already happening. The second link reports that the USA and Greece are moving rapidly into a closer military alliance with additional US military weaponry being permanently stationed at military bases in Greece. If Turkey does obtain Russia’s air defense system, it is entirely possible that all US military assets will leave Turkey and be transferred to Greece, to other Eastern European NATO nations and to non-NATO American allies in the Eastern Mediterranean region. The second link also delves deeper into just how serious the breach between Turkey and the USA is becoming. Since Greece and Turkey were historic enemies prior to the creation of NATO, Greece will surely welcome the transfer of US military assets from Turkey to Greece.

The third link discusses a budding new alliance in the Eastern Mediterranean region between Israel, Greece, and Cyprus. Israel is a very close US ally, Greece is a NATO nation and Cyprus is an EU nation tied closely to Greece. The USA is encouraging closer ties among these nations. Several months ago, these three nations formed a “Secretariat” to coordinate their closer relationship and scheduled a series of trilateral meetings, at least one of which was held in Beersheba in Israel. The USA held close strategic talks with Greece in Washington, DC and it clearly favors the new tripartite arrangement between Israel, Greece, and Cyprus. The fourth link confirms this budding cooperation is swiftly developing toward a formal alliance. These three nations have met regularly to cement their ties and US Secretary of State Pompeo joined the sixth meeting of these nations. It appears the USA may become a fourth nation to join this Eastern Mediterranean “alliance.” At the very least, the USA can be seen as favorably “midwifing” this new entity. The fourth link also discusses the energy development project involving a major natural gas find off the Cypriot coast, and that the new Eastern Mediterranean group of Israel, Greece, and Cyprus may soon be joined by Italy, Egypt, Jordan and…(wait for it)…the Palestinians. The development of the new natural gas fields will mean a lot of money for the nations involved in the project and Italy, Jordan, Egypt, and the Palestinians would really benefit from participating in the revenue stream from this energy project. Indeed, sharing in revenue from this gas project might be a major inducement for the Palestinians to agree to what has been touted as “the deal of the century” being put together by the Trump administration in the Eastern Mediterranean/Mideast region. Jordan and Egypt are Islamic Sunni nations aligned with the West. If they are joined by Saudi Arabia, the UAE and other Sunni nations in a new alliance including some NATO members, Israel and the perhaps even the Palestinians, it will solve the “Palestinian-Israeli” issues and create a new anti-Iranian alliance stretching all across Europe into the Eastern Mediterranean and Sunni Mideastern nations. If a comprehensive Mideastern deal also results in the ability of the Israelis to begin building a Third Temple in Jerusalem, it really would be a “deal of the century.”

If Turkey leaves (or is expelled from) NATO, Greece has many islands in the Aegean Sea south of the Bosporus and Dardanelles on which NATO missiles and weaponry could be based to prevent Russian Black Sea warships from sortieing into the Mediterranean Sea. Also, NATO is preparing to welcome the Caucasus region nation of Georgia into the NATO alliance (fifth link). Georgia is located on the eastern side of the Black Sea and has no love for Russia as Russia waged a short war against it not long ago and seized some Georgian territory. Basing NATO missiles and air defense systems in Georgia would really help NATO’s military position greatly. There is still a chance that Turkey will cancel the order for Russian weaponry and stay in NATO, but Erdogan’s policies are heading for a situation where Turkey will exchange almost 30 NATO allies for one Russian overlord.

There is a biblical context to these actions. Ezekiel 38-39 prophesy that a great global power struggle will exist in the latter days of our age, and that a Gog-Magog alliance (headed by Russia, China, and Iran) will oppose and eventually attack another global alliance headed by the modern nations descended from the supposedly “lost” ten tribes of Israel–who were never really “lost” at all. The Bible has many prophecies about their destinies after they were exiled from the old Promised Land, and the nations which fulfill the biblical prophecies about them are the historically Anglo-Saxon nations as well as many nations in Europe and Scandinavia. In other words, this Israelite-headed alliance prophesied in Ezekiel 38-39 is NATO and their global allies. The biblical and secular evidence supporting this conclusion is very comprehensive and can be found in my books about the history of the ten tribes of Israel. These books can be ordered via the appropriate links at this website’s home page. As we head deeper into the latter days of our age, the Gog-Magog alliance and the Israelite/NATO alliance will continually be jockeying for strategic and geographical advantages. However, God has already decided how the yet-future age-ending World War III will begin, unfold and conclude. This information is found in Ezekiel 38-39 and related biblical prophecies.

The Bible’s prophecy in Ezekiel 38-39 accurately foretold many things about modern events and alliances that have come to pass in our modern time. That such accurate fulfillments are occurring today means that only a Creator God could have inspired these prophecies circa 2500 years ago and be bringing them to pass in our time. For additional information and documentation on these assertions, you can begin by reading my free articles: What Ezekiel 38-39 Reveal about a Future World War III, Are We Living in the Biblical Latter Days? and The USA in Biblical Prophecy.

My thanks to the reader who sent me the first link.