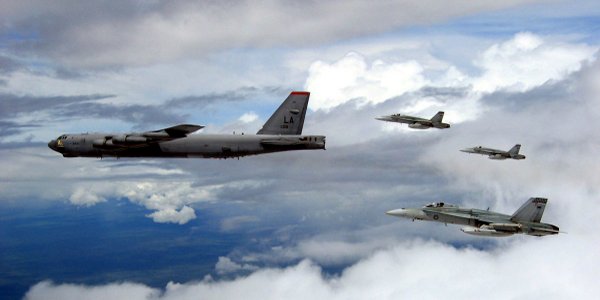 When I was younger and living through the Cold War, it was well-known that the US Air Force had a squadron of nuclear-armed B-52 bombers that were on ready alert for instantaneous take-off orders if Russia started a nuclear war. These bombers had air crews ready on a 24/7 basis, and I recall seeing TV documentaries about them “scrambling” from their ready-rooms to their assigned B-52s in the event a war started. These bombers were generally aloft within minutes of being given the order to take off. When the Soviet Union disintegrated into many different nations and the Cold War ended, the USA deactivated these ready-alert nuclear bomber squadrons.

It now appears that, after 26 years, the USA is very close to again activating a 24/7 nuclear alert B-52 bomber squadron. The first link and second link report that the USA is preparing facilities to house the crews for the new 24/7 alert squadrons at Barksdale AFB in Louisiana. The first link asserts openly that this action is being taken due to the imminent possibility of a nuclear strike against the USA from North Korea. Since the facilities to house the alert personnel are already being prepared, it seems evident that the order to activate a 24/7 nuclear alert B-52 squadron is not far away. If the North Koreans are foolish enough to launch nuclear missiles at the USA, bomber squadrons would “scramble” and quickly be aloft and heading toward North Korea. They would need to be refueled by air tankers and escorted by fighter aircraft–both of which could be launched from bases in the Western USA, Hawaii, Guam, Japan and other locations.

The USA is hardly dependent on B-52 bombers to quickly eliminate North Korea from world maps if North Korea attacks the USA with a nuclear strike. The USA could also launch nuclear-capable B-2 bombers and fire nuclear-tipped missiles from submerged “boomer” submarines. I assume that at least one such submarine is already “on station” to launch its nuclear missiles within minutes (or seconds) of a North Korean missile launch–if it is determined that the North Korean missiles are on a launch profile and trajectory toward US territory.

This action shows how close the USA is to a preemptive strike vs. North Korea. It also shows how elderly some of the American weapons systems are. I wonder if some of the B-52s that would be activated for the new 24/7 alert squadron are the same planes that were in nuclear alert squadrons in 1991 when the alert program was deactivated.