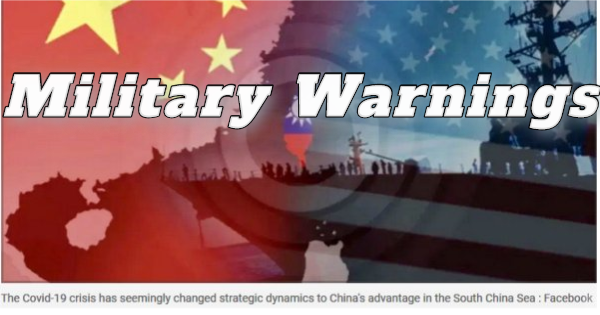 Amidst the mass news coverage of other events, the world press is mostly ignoring the growing threat of a major war erupting in the Indo-Pacific region. This post is intended to alert readers to this impending threat as it could affect your life quickly if it happens.

China is menacing the Asian region with several military threats. I’m sure readers are well-aware of China’s attempt to seize control of the entire South China Sea even though the world community does not recognize their claims. China has built artificial islands in that region which were quickly turned into military bases. Many nations with claims in that region oppose China’s claims, but China has also been bellicose in sending warships to bully the fishing and drilling vessels of other Asian nations bordering the South China Sea. I have posted on this subject several times and those posts are accessible via topical searches at the “prophecy blog” link at my website. China has also taken action to enable it to abrogate its “one nation, two systems” approach to Hong Kong and assert Chinese military control over that former British colony. President Trump has announced that many special privileges in banking, trade, etc. enjoyed by Hong Kong will be terminated if China fully takes over Hong Kong. China and India have had a smoldering military flashpoint along their Himalayan border region for years. China also has reportedly been making preparations to invade Taiwan. At any time, China could start a war in any of these theaters (or several of them simultaneously). The USA and Japan just sent a huge military warning to China that the world’s press largely ignored. This post will describe that warning, after presenting more information on the aforementioned flashpoints that led to the American-Japanese warning to China.

The first link offers information with more detail on the crisis points mentioned above and how these flashpoints are creating the circumstances for wars to break out. The second link focuses on the growing chances of China provoking a war over Taiwan. The link relates to specific invasion threats vs. Taiwan that China has openly declared as well as Chinese provocations vs. Malaysia, Vietnam, and the Philippines. It details “at least nine” examples of Chinese warships acting provocatively toward US naval warships and the USA sending warships to Taiwanese waters to show support for Taiwan. China and India are drawing closer to open conflict on their Himalayan border, as the third link describes. This simmering conflict exists in the greater context of a China which is acting more militaristic toward everyone near its borders.

The USA and Japan are both keenly aware of Chinese militarism and recently staged large-scale joint air force actions to warn China against starting a war. The USA recently sent four B-1 bombers to a base in Guam along with their support crews. The B-1s are described as having bombing capabilities superior to B-52 bombers and the B-1s can fire cruise missiles designed to attack warships from a stand-off range–an action that would surely happen in any war in the South China Sea or near Taiwan. Remarkable information is in the fourth link. It describes a series of joint American-Japanese air force exercises that were clearly meant to demonstrate to China a joint willingness to take military action vs. China if China starts a war. There were a series of four such actions. One involved 2 B-1 bombers flying to Asia from a Texas AFB for joint aerial exercises with 16 Japanese fighter aircraft acting as escorts. The second exercise involved sending 2 B-1 bombers from a South Dakota AFB on a 32-hour round-trip mission to fly over the South China Sea (the number of fighter escorts was not mentioned). This was a clear message to China that the USA’s ability to attack Chinese warships in the South China Sea is not limited to American forces based in the Indo-Pacific region. The B-1s can also fire missiles that can hit the Chinese artificial islands in the South China Sea. The third aerial exercise involved a number of B-1 bombers flying to Asia from a South Dakota AFB which were joined by 6 US fighters and 15 Japanese fighters for a total of 21 fighter escorts. The fourth exercise was the largest. It involved 2 B-52 bombers flying to Asia from a North Dakota AFB to be escorted by 45 Japanese and 6 US warplanes for a total of 51 fighter escorts in this wartime exercise!

These are very large peacetime exercises and are clearly intended to train Japanese fighters to escort US bombers on wartime missions. As the fifth link puts it, the exercises are intended to demonstrate the readiness of US and Japanese air forces to “combine their forces over vast distances.” It also is obviously giving US bomber crews based in North America the chance to practice flying quickly to Asia to be escorted by waves of Japanese warplanes to targets in any Asian war. Hopefully, this will deter Chinese aggression, but that cannot be guaranteed. What is certain is that if China starts a war, it will immediately lose the power to control the scope and size of the conflict. Other nations threatened by China will be free to respond as aggressively as they wish. China is extremely vulnerable to attack in one keyway. As those who have read my posts over the years, I have noted the vulnerability of China’s massive Three Gorges Dam to attack by ballistic and cruise missiles as well as aerial bombs. If China starts a war, it may find its huge dam attacked and destroyed by those defending themselves vs. Chinese attacks. That dam holds back an immense reservoir of water. If a war started by China results in the breaching of that dam, it will unleash a massive fresh-water tsunami all the way from the dam to the Chinese border with the Pacific Ocean. It will devastate Chinese cities, destroy cropland and much electric power supplied by the dam will be lost for many years. China has much to lose in any war it starts, and China should not delude itself into thinking it can declare the huge dam “off-limits” if a war starts.

China would also lose badly in any war it starts due to the financial/economic repercussions it would cause. Much of the world would impose sanctions and boycotts on Chinese goods, travel rights, etc. much like the sanctions now imposed on Iran. The sixth link warns that Germany (which essentially speaks for the EU) has warned China of the consequences of its intended suppression of Hong Kong. The link also cites the joint declaration of warning to China on this same issue from the USA, Canada, the United Kingdom and Australia. Clearly, much of the world is ready to take economic actions vs. China if it starts a war. China could refuse to ship many goods from its innumerable Western-owned production facilities located in China. That would hurt the Western nations in the short-term, but would hurt China much worse in the long-term as other nations would then relocate their production facilities to their home nations and never rely on China for supply chains again–cratering the Chinese economy. These kinds of stresses could result in a sudden and unexpected collapse of global financial/monetary systems–an event that is prophesied in Revelation 18-19 to occur in our times. China could demand payment of US debt and the USA could simply declare all its debts to China to be null and void due to Chinese acts of war. Such a crisis could get very ugly very fast. [See my articles, Are We Living in the Biblical Latter Days? and Is Babylon the Great about to Fall…Ushering in a New “Beast” System? for in-depth information about biblical prophecies on these topics].

There is one more audience for which the huge joint US-Japanese air force exercises were intended, in my opinion. North Korea has been very threatening toward the USA and Japan. President Trump has extended the “carrot” to North Korea by meeting with its leader. North Korea has resumed its nuclear and missile programs, and has apparently rebuffed the olive branch from the USA. The large joint air exercises of the American and Japanese air forces also served as a warning to North Korea that the “stick” can be used against North Korea if it refuses the “carrot” of denuclearizing the Korean Peninsula in an exchange for the end of global sanctions against it.

We live in increasingly dangerous times. Most people would be surprised by the eruption of any sudden war with China. Those who read my blog at this website will not be surprised.