USA and ISRAEL Pull out Of UNESCO 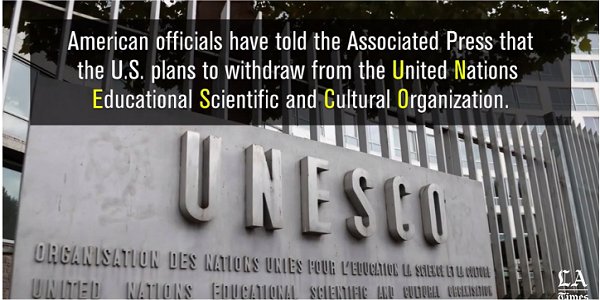 A few days ago, the USA and Israel both withdrew from membership in UNESCO (the United Nations Educational, Scientific and Cultural Organization). UNESCO, which is based in Paris, has long been criticized for anti-Jewish, anti-Israeli actions and attitudes. The action by President Trump to pull out of UNESCO actually finalizes the USA’s breach with UNESCO which began under President Obama, who dropped funding for the organization for similar reasons. The three links below detail different perspectives on the matter. The second link reveals just how absurd UNESCO’s attitudes toward Israel had become. In May, UNESCO approved “a resolution rejecting any legal or historical claims by Israel to the city of Jerusalem.” Huh?? What dream world is UNESCO living in to make such an obviously inaccurate declaration? As if that wasn’t bizarre enough, UNESCO also declared the city of Hebron, the burial place of the Hebrew patriarchs Abraham, Isaac and Jacob, to be a “Palestinian World Heritage site (emphasis added).” Clearly, UNESCO is pursuing an anti-Israeli agenda to take such strange actions, and the USA was right to drop its membership in such a biased organization. Other nations should do so as well, but they likely will not do so as they are cowed by globalist pressures.

It is my view that the United Nations desires to develop into a global government of some kind. If it did it would almost surely issue politically-correct diktats to the nations similar to the manner in which the unelected EU leaders issue diktats to European nations. The UN can gradually extend its power and influence over the nations via the actions of its various “alphabet soup” agencies. In the case of UNESCO, some of the designated sites surely do merit preservation for the good of mankind and preserving our world’s common history. However, does UNESCO always consult with the governments of affected nations whenever they decide to declare some location a World Heritage Site? I don’t claim to know the legal restrictions such a designation places on the government of a nation to develop or utilize such a site, but there must be some kind of restrictions. Any kind of restrictions, legal or implied, gives the UN a kind of “lien” on the properties of all the World Heritage Sites throughout the world. It advances the UN’s control over more physical territory to have more sites declared World Heritage Sites. The above-cited cases involving the cities of Jerusalem and Hebron reveal just how absurd some of these designations can be.

Now that the USA and Israel have withdrawn entirely from UNESCO and are no longer signatory nations to its activities, it is my understanding that neither nation needs to recognize or abide by any actions taken by UNESCO concerning any sites within their respective national borders. If this is the case, then the USA and Israel have regained a portion of sovereignty over their own territory which had been formally or informally ceded to UNESCO.

Zechariah 12:1-6 prophesies that the nations of the world will be prejudiced against the Jews (“Judah”) in the latter days or our age. The prophetic phrase “In that day,” used several times in this prophecy, is widely understood to refer to the “Day of the Lord,” a period of climactic events that will occur at the end of our current age. Zechariah 12:2-3 prophesies that Jerusalem will become a “cup of trembling” or “a burdensome stone” to the nations in the latter days, and that has certainly happened as Jerusalem is an endlessly controversial subject in world geopolitics. Verse 3 proclaims that God will not abandon Judah and Jerusalem in the latter days even if all the nations of the earth were to do so. Notice this prophecy does not specifically prophecy that all nations will abandon Judah and Jerusalem, it reassures Judah and  Jerusalem that they will not be abandoned by God even if such a thing were to occur.The Creator God is sovereign over all things and he holds the final “veto” over everything on earth if he chooses to exercise it. God declares he will “cut to pieces” the nations that oppose his will concerning the city of Jerusalem.

Thankfully, the USA has not abandoned the Jews (“Judah”) or their right to the city of Jerusalem. Readers of my books realize that there is another generally-unappreciated reason why the USA has been a staunch friend of Israel ever since its founding in 1948 (an event which fulfilled a biblical prophecy in Zephaniah 2 that the Jews would have a nation of their own in the former Promised Land during the latter days). Judah is just one of the original 12 tribes of Israel. All the tribes of Israel are prophesied to be on the earth in the latter days (Genesis 49 and Revelation 7). Genesis 48-49 offer very specific clues regarding how to locate the various tribes of Israel among the modern nations. My free article, The USA in Bible Prophecy, offers just some of the major reasons why the USA was founded as the modern nation of Manasseh–one of the two principal tribes of Israel descended from the patriarch, Joseph. Many latter day prophecies in the Bible are directed toward Israel or Judah. These two terms are not synonymous. The term Judah refers to the Jews, who derive that name from their tribal name of Judah. The term Israel, when used in biblical prophecies, almost always pertains to the nations of the ten tribes of Israel who were not part of the biblical kingdom of Judah. If one assumes that biblical prophecies concerning Israel and Judah are synonymous, that person can not possibly understand important aspects of latter day, biblical prophecies. If you have not done so, I urge you to consider ordering my 4-part book series on the entire history of the ten tribes of Israel which identifies them throughout history as well as identifies their whereabouts in the modern world. A less expensive option is to order my E-book which covers much of the same historical material. Both options are available on my website’s homepage.

Back to UNESCO. I’ll bet there is some serious “gnashing of teeth” at the UNESCO and UN offices at the exit of the USA and Israel from UNESCO. It means a diminution of the UN’s power and it is not likely to get that power back anytime soon.