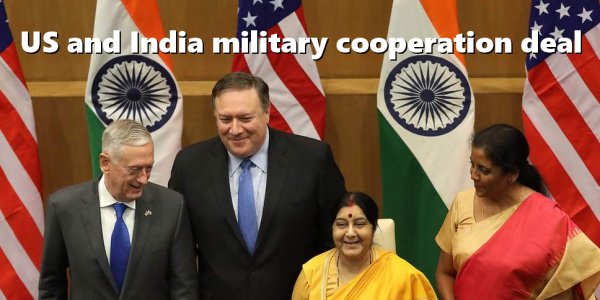 In another important international development that has been all but ignored by the American media, the USA and India signed a new joint military agreement which is of considerable importance. This agreement strengthens the growing alliance between India and the USA which has been forming for several years. That alliance has now become more formalized with this agreement. It allows the USA and Indian military branches to share sensitive military intelligence and communications, opens a direct “hotline” between the USA and India, allows India to purchase more high-technology US military equipment, commits the militaries of both nations to increased joint military exercises, etc. It is entirely possible that other mutual agreements were made which are not being released to the public. The first link and second link offer details about this agreement, but one thing is clearly evident: by sharing sensitive military information, communications, and technologies, the USA and India are treating each other as allies.

The USA and India need each other. Hemmed in by two nuclear-armed enemies, China and Pakistan, which are allied to each other vs. India, India needs a strong alliance with another nuclear power that has conventional military power as well. The USA fits India’s needs very well. Given China’s rapid militarization and threats throughout the Western Pacific and Indian ocean regions, the USA needs an ally that is strategically located in the area and is a nuclear/conventional power as well. India fits the American needs very well. This is not a one-sided alliance; it is very much mutually beneficial.

Barely a month after this agreement was signed, the USA and India conducted a joint infantry exercise in northern India, not far from the Himalayan Mountains and the Chinese border. The third link, fourth link, and fifth link offer details about this exercise. While the links vary in their accounts of how many troops were involved from each nation, there are two very clear messages in this exercise. The first is that the militaries of India and the USA will be practicing how to fight as allies in a variety of terrains. The second message is a very muscular one and it is obvious from the geographical location for this exercise. The site of this exercise was not far from the border of China, and I’m sure its selection was no accident. This sends a strong message to China that if a war breaks out between China and Pakistan on one side and India on the other side, India will not be fighting alone.

Allow me to make a brief digression about the ten tribes of Israel so new readers can make sense of the national identifications I will make in this post.

The growing alliance between the USA and India fits very well with the biblical prophecy in Ezekiel 38-39 which describes two major global alliances that will fight a climactic World War III at the very end of this age. Russia, China, Iran, and their allies are the Gog-Magog alliance which will start World War III with a surprise attack, against “Israel,” also called the “house of Israel” (Ezekiel 39:22. 23, 25 and 29), and their allies. This biblical terminology refers not to the modern Israeli nation (which is called “Judah” in latter-day biblical prophecies in Zephaniah 2 and Zechariah 12 and 14), but rather to the modern nations of the descendants of the supposedly “lost” ten tribes of Israel and their allies. Most people mistakenly think the lost ten tribes have to be little knots of people here and there with vestigial Jewish characteristics. Wrong! The original ten tribes of Israel were never “Jewish” to begin with as the Israelites and Jews fought wars against each other regularly in biblical narratives. When the ten tribes went into exile, God prophesied they would become vastly more numerous in their places of exile and eventual relocation (Hosea 1:10). Genesis 49 has prophecies with specific clues about each of the ten tribes of Israel’s location or national characteristics in the latter days. Also, these ten tribes of Israel were never really “lost” at all. God sent them a message via the prophet, Jeremiah, in Jeremiah 3:6-12 approximately a century after they went into exile. This prophecy reveals many Israelites were then located to the “north” (verse 12) of Judah’s location in the Levant.  Draw a line straight north of Jerusalem and you will come to the lands around the Black Sea. At that time, these lands were inhabited and ruled by Scythian or Saka tribes which migrated into that region just after Samaria, the capital of the northern kingdom of Israel, fell. These Scythians were just one branch of the scattered Israelites who dispersed in many directions. Two centuries after their exile, Daniel the prophet acknowledged the ten tribes had been widely scattered by then into many areas of the world (Daniel 9:7). The book of James, in the New Testament, was also addressed to them in their scattered locations (James 1:1), so many Jews of Jesus’ time knew where the ten tribes were then living. The Greeks called the Israelites who resettled in the Black Sea region the Scythians. The Romans later called them the Goths. When the twin Asian empires of the Scythians and their brother tribes of the Parthian Empire fell in the third century AD, it triggered a mass migration of many millions of people out of Asia into Europe. These migrating nations were called the Goths, Germans, Anglo-Saxons, Jutes, etc. in our history books.  I’ve never seen a single secular history book examine where in Asia all these millions of Caucasians originated. They do not want to touch the subject! If they did, they would inevitably find the scattered ten tribes of Israel. These migrating tribes founded the modern nations of Europe, the USA, Canada, Australia, New Zealand, etc. You can prove the Israelite origin of the modern European/NATO nations via secular historical evidence alone. However, the Biblical prophecies lead you to the exact same result as the secular histories.

If you want to better understand what is happening in our modern world and what is about to happen, I urge you to read my books which are available at the home page of this website. The four-book set of printed books gives the entire history of the Israelite peoples, from the time of the patriarchs through modern times, and the E-book gives a shorter but less expensive option to obtain the same information. If you read these books, you will see that a divine plan is being worked out even though most of the world is oblivious to it. There is a Creator God. The fact that he is keeping all his biblical prophecies regarding the Israelites throughout history and into our modern times is just one proof of his reality and sovereignty. The Bible includes God’s Divine script for the nations in our time in biblical prophecies, but until you can identify the modern nations by their correct biblical names, you cannot possibly understand God’s script properly.

How does the above relate to the increasingly allied relationship between India and the USA? Ezekiel 38 includes in its details a prophecy that India and the USA will be allies in the latter days. The USA is the chief nation of the modern “house of Israel” and it was founded as the modern tribe of Manasseh, a brother tribe to the Ephraimites who founded the British nations. Please see my free article, The USA in Biblical Prophecy, for some of the main points about the USA in biblical terminology. India is also mentioned in Ezekiel 38-39’s prophecy as an Asian ally of the USA and its western allies. Japan and the Young Tiger nations of the Pacific Rim are also mentioned in Ezekiel 38. You can read about their identifications in my articles, What Ezekiel 38-39 Reveal about a Future World War III, Japan in Biblical Prophecy, and Are We Living in the Biblical Latter Days? These articles will document that a Creator God inspired his biblical prophecies millennia ago and is very literally bringing them to pass in our modern world. Whether the world likes this conclusion or not is irrelevant. This is a provable truth, and you should see the evidence, in my books, articles and audio messages, which verify this assertion.