US OPENS JERUSALEM EMBASSY AS ISRAEL CELEBRATES ITS 70TH YEAR 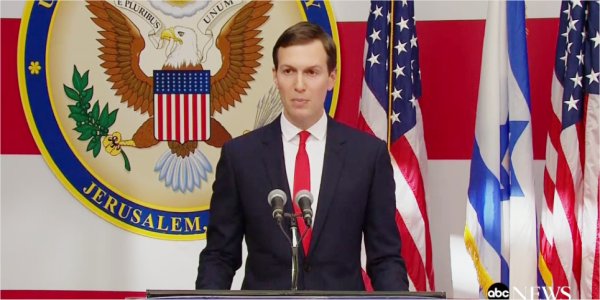 All readers are very aware, I’m sure, that the US Embassy to Israel has now officially moved from Tel Aviv to Jerusalem at the same time that Israelis are celebrating the 70th anniversary of the founding of the Jewish state of Israel. The first link covers the opening of the embassy and the current extremely warm relationships between the USA and the Israelis during the Trump administration. Prime Minister Netanyahu praised President Trump by saying  that Trump “made history” by “recognizing [the] history” that Jerusalem is the capital of the Jewish people. The second link offers a critical analysis of the event. It acknowledges that Hamas tried to implement a “nightmare scenario” for Israel: “thousands of Palestinians bursting through the fence with Gaza.” The world media and many nations have roundly criticized the Israelis for protecting their nation from the invasion that Hamas wanted to accomplish. The Palestinians wanted to “break through the fence,” and pour outward into Israeli cities and towns–perpetrating and provoking even greater violence. This terrorist goal had to be prevented by Israel.

I read the second link’s article in the Minneapolis Star-Tribune--which included a sidebar that a large crowd of Palestinians badly damaged the Palestinian end of a fuel/gas terminal bringing energy from Israel into Gaza as well as a conveyor belt bringing animal feed from Israel to Gaza. It is clear evidence of the blind hatred of Hamas-inspired radicals that they would disable the very lifelines via which the Israelis have mercifully supplied the daily needs of people and animals inside Gaza. The media rarely mentions that it is the humanitarian aid of the Israelis that keep Palestinians in Gaza alive. This mindless action of self-destruction by the Palestinians inside Gaza argues that Hamas may be deliberately trying to make life harder for their own people in order to [falsely] blame Israel and to create even more world media articles that will be slanted in favor of the Palestinians. The third link reveals that Hamas has admitted that the vast majority of the fatalities suffered by the Palestinians in their effort to push their way across the Israeli border were Hamas members, confirming Hamas’ role in orchestrating the entire matter.

The media rarely reports that Hamas is a terrorist-inspired, Islamist organization which is dedicated to the destruction of the Israeli nation. The Hamas-led Palestinians are being called “protesters” even though their event was no peaceful protest at all. Six years ago during the Obama administration, even CNN ran a story about how extreme Hamas really is (fourth link). Indeed, the virulent nature of Hamas was revealed in an even earlier event which revealed how violent an organization it really is. In 2007, there was a Palestinian “civil war” in which Hamas displaced Fatah as the leadership group within Gaza while Fatah stayed in control in the “WestBank.” Hamas and Fatah killed each others’ members in this battle for supremacy (fifth link). I doubt many remember this Palestinian civil war, but it graphically illustrates how violent Hamas really is. Hamas does not hesitate to kill other Palestinians if they think it will advance their goal of destroying the Israeli nation. At the UN, Israel was predictably condemned for defending its own people and borders. Hamas provoked that entire confrontation; not Israel. In an action that warmed my heart, US Ambassador Nikki Haley walked out of a UN Security Council meeting during the deceitful accusations against Israel by the Palestinian representative (last link). As an American, I applaud President Trump for moving our embassy to Jerusalem and Ambassador Haley for her courageous action.

What biblical connections can we apply to the 70th anniversary of the state of Israel and the events at Israel’s borders where Hamas, Hezbollah, Iran and Syria are all threatening Israel’s existence? The first connection I’d draw is that this is the 70th anniversary of Israel’s existence. The number “70” has biblical significance. God specified that 70 of the elders of Israel could accompany Moses, Aaron and Aaron’s sons to meet personally with the God of Israel on the top of Mt. Sinai and share a meal with their Creator (Exodus 24:1, 9-11)! Think of the honor of being included in that group! Biblical scholars are familiar with the “70 weeks/years prophecy” of Jeremiah 25:10-12 and Daniel (Daniel 9:2 and 24). Luke 10:1-20 cites Jesus sending out 70 of his disciples to work miracles in his name. Since the founding of Israel as a Jewish nation was so obviously a fulfillment of the prophecy of Zephaniah 2 that this would happen in the time near the end of our age, we have to consider that significant events may be imminent for Israel and the Mideast. We do not know specifically what that may entail, but we should be watching for something major to happen. Perhaps the act of the USA moving its embassy to Jerusalem may prove to be the globally significant event which marks the significance of the number “70” in Israel’s history in 2018. That it is the USA which has led this formal recognition of Jerusalem being Israel’s capital city is something I find significant. The USA, in biblical terms and prophecy, is the tribe of Manasseh in the modern world. Manasseh was one of the two tribes descended from the biblical patriarch, Joseph–whose sons inherited Abraham’s birthright blessings (a topic I examined in my previous post). By moving the embassy of the USA to Jerusalem, modern Manasseh has allied itself powerfully with modern Judah. This is of great biblical significance.

The prophecy in Zephaniah 2 which foretold the founding of a Jewish nation in the old Promised Land in the latter days has other very timely things to say to us. Verse 9 refers to the Jews (“Judah”) as “the residue [and] remnant of my people.” The Jewish state was founded in 1948 by native Sabras and a great many Holocaust survivors after World War II ended. For the prophecy to refer to the founding people of the Israeli nation as a mere “residue or remnant” of the Jewish people is most appropriate for what really occurred when so many Jews were murdered in the Nazi Holocaust. It also prophesies in verses 8-10 that the people of the nations surrounding modern Judah… “magnified themselves against their border (emphasis added).” What Hamas just tried to do vs. Israel was magnify themselves against Israel’s border with Gaza. Iran, Hezbollah and Syria are “magnifying themselves” against the Israeli northern border region above the Golan Heights. Hezbollah is powerfully “magnifying themselves” against the Israeli-Lebanese border wherein Hezbollah has reportedly as many as 100,000 missiles and rockets of varying ranges aimed at Israel. Zephaniah’s prophecy is sounding quite accurate for today’s geopolitics, isn’t it? Finally, verse 4, speaking of our latter day time, states “Gaza is forsaken.” I realize the prophet Zephaniah had the ancient Philistine city of Gaza in mind when he wrote it, but that language seems awfully appropriate for today’s reality as well, doesn’t it?

For in-depth articles examining topics discussed above, I recommend: Are We Living in the Biblical Latter Days?, The USA in Biblical Prophecy, and Four Reasons the Jews are Judah.

My thanks to a reader who sent me the third and fourth links.