US GOVERNMENT REPORT WARNS AMERICANS TO PREPARE FOR EMERGENCIES 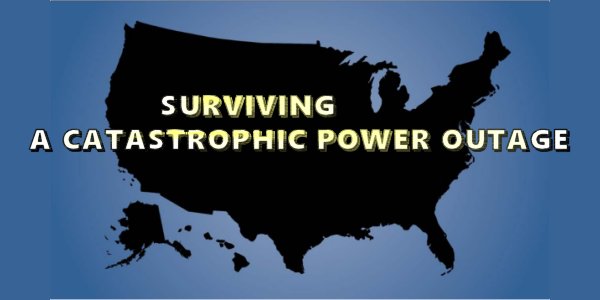 Americans received a warning recently that few realize even occurred (first link). A report on preparedness published by the US Department of Homeland Security (DHS) warns Americans that they face a “profound threat” to the US power grid which, if it went dark, would quickly degrade all kinds of public infrastructure (water supplies, communications, food supplies, transportation, etc.). The report, entitled “Surviving a Catastrophic Power Outage,” warns about a variety of dangers to the national power grid (terrorism, solar storms, weather disasters, etc.) and further warns that although the power outage may last weeks or a few months, it predicts a major outage could last “most likely six months or more.”

In the past, federal warnings have urged US citizens to have at least 72 hours of emergency supplies to enable them to be self-sufficient for that period of time in the case of an emergency. This report urges citizens to have at least 14 days of emergency supplies for each person or family. Indeed, if the scenario of a six-month power outage occurred, so many Americans are unprepared for such an event that many would die. This report published by the DHS does not make a projection on the death toll among Americans in the event of a national power outage, but a book published in 2009, One Second After, by William Forstchen, focuses on what might occur in a middle-sized, college town in North Carolina if a national power grid failure occurred. It predicts a level of fatalities in the USA that will astound you if the entire nation was without power for over a year. It would mean essential food, medicine, and water distribution systems would collapse…everywhere…at once. It predicates its scenario based on Electromagnetic Pulse (EMP) weapons which hit the nation without warning. Communications and transportation would grind to a halt. Basically, anything that is dependent on electricity would fail to work. This is not a “fringe” book; its foreword was written by former US Speaker of the House Newt Gingrich. I did a post on this book years ago, and recommend the book to readers everywhere.

This officially-sourced warning is long overdue. Congress has known about the vulnerabilities of the national electric grid for at least a decade but has responded to the threat by doing what Congress does best….nothing.

Americans who have been affected by power outages due to hurricanes, earthquakes, ice storms, floods, tornadoes, etc. realize that such events can result in being without power for days or even weeks. However, when a regional grid goes down (such as in the Florida Panhandle region due to a recent hurricane), the federal government and the entire nation rushes to assist those in need. If a national grid failure occurred, no one will be coming to help you in your area. Everyone would be struggling to survive in their own towns and locations. Being in a large population center would be one of the most dangerous locations of all. How will people survive if they are trapped in a high-rise apartment with no electrical service…for a year? Do hospitals and care-facilities have backup generators or power generation facilities? The chaos after a national power failure would be severe. Such a threat can come from terrorists or via an attack by a foreign nation-state. It could also come from our own sun. The second link (written several years ago) details the extent of power outages that could occur if a Coronal Mass Ejection (CME) from the sun hit the atmosphere above the USA. It predicts that 130,000,000 Americans would be without power and that our nuclear power plants might be shut down for 1-2 years. While not as catastrophic as an EMP attack from a foreign power, this event would still result in massive suffering and would surely involve power rationing to regions and types of usage for a major length of time. If the CME hit Europe or Asia instead of North America, those nations would be most affected by such a solar event.

The full report of this official warning is included as the third link. It is long and written in bureaucratic formats. I admit I did not read any of the appendices and I skimmed the report itself. I will share some of what I noticed in this report. On page 12, it states Americans should be encouraged to “shelter in place” and cites a possible scenario lasting 30-45 days. Page 13 includes a statement that the nation needs to “build a culture of preparedness at the individual and household level.” Since I worked in two governmental jurisdictions in my life, allow me to translate this into common language for you. It means that in the event of a widespread power outage, “you and your family will be on your own” for an indefinite period of time and that you and your family need to prepare now before such an event occurs. On page 14, it commended the state governments of Washington, Oregon, and Hawaii for adopting a standard of at least 14 days for citizens to be able to be self-sufficient on their own in the event of disasters.

Biblical prophecies warn that in the latter days of our age, there will be a series of global disasters and traumas that will cause an immense amount of suffering and death. No one can prepare for every possible crisis, but all readers can make common sense preparations now that will enable you and your family to cope as best as possible whenever such events occur. If you have any doubts that we are living in the biblically-prophesied latter days, please read my free article, Are We Living in the Biblical Latter Days? The facts in that article ought to convince any open-minded people that the answer to the article’s question is clearly “yes.” To begin preparing for such a time and such events as are warned about by the cited government report, please read my article, Should Christians Prepare for Future Hard Times? The answer is again “yes,” and the article offers common-sense suggestions about how to make such preparations. Indeed, these suggestions apply not just to Christians, but to everyone.

We do not know how much time we have before a series of major crisis events befall our earth. I Thessalonians 5:2-3 warns that the traumas of the latter days of our age will come on the earth as “sudden destruction” in a time that seemed to be one of “peace and safety.” I think it is wise for readers to start preparing sooner rather than later for such times. When major crises strike your city, region or nation, there will be no more time to prepare. You will have to “make do” with whatever you have on hand. I also suggest that you read the aforementioned book, One Second After. Although it is a fictional book, it graphically examines the dangers of a massive power outage, who is most at risk, and what the people in that fictional town did to band together to survive the crisis. If we ever have a national power outage, every city and town will have to face for real what the fictional town in that book had to face. The book is set in the USA, but obviously, this kind of crisis could also take place in any other part of the world as well.