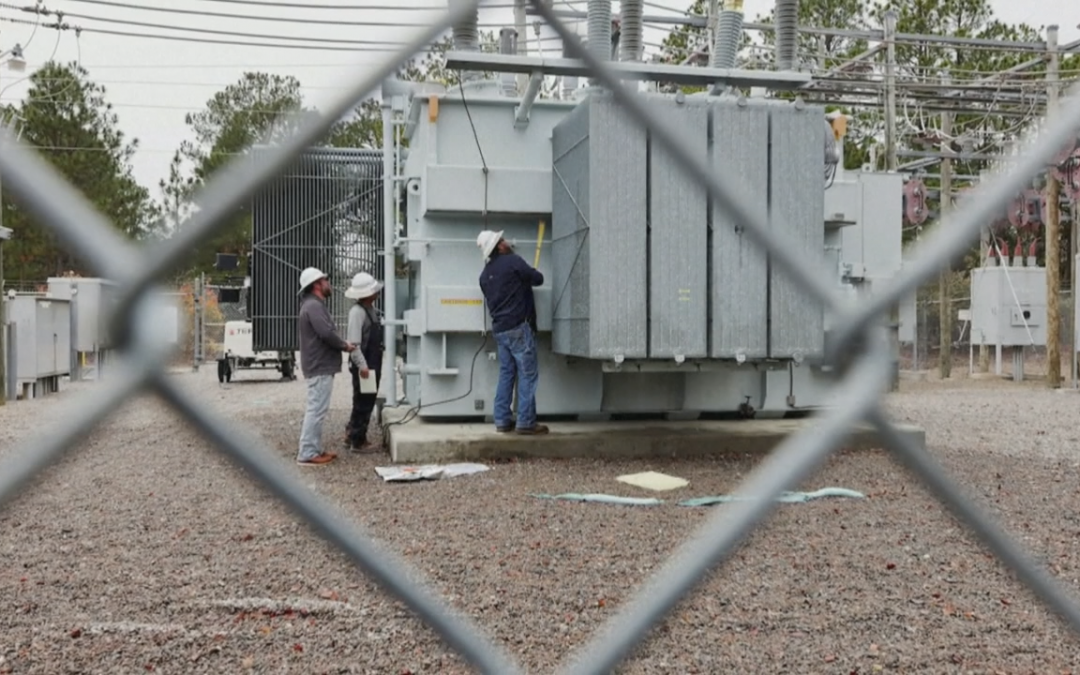 The US electric grid was just deliberately attacked in North Carolina, knocking power out to approximately 35,000-40,000 customers. The first link, second link and third link all report that authorities agree that this was a deliberate “attack” upon an American electric substation. The substation was heavily damaged by “gunfire” according to the media reports. The term “gunfire” is not defined as of yet, but the rounds fired were clearly no random ricochets from an errant deer hunter or someone out target shooting whose rounds went awry.

Was this “gunfire” from a mere rifle or did it come from a heavy machine gun or some other military-grade weapon that may have been provided by foreign backers of terrorism? While I’m sure an investigation will reveal many details not yet known, this strikes me as an attack planned and carried out by a state-supported, terrorist team. The shooters knew “exactly” where to fire at to inflict the maximum damage on the electrical facility. This argues the shooters were well-trained with military precision to known exactly where to fire their bullets. The media reports and authorities agree that this was a “targeted” attack and not a random event. This was clearly not an impulsive attack by some drunken “red necks.” Information revealed so far argues this was an attack by highly-trained operatives who knew “exactly” how to do the most amount of damage with some “gunfire” and then disappear. This conclusion is supported by the fact that the FBI was quickly called in to be part of the investigation into this attack.

While I had planned on posting on another topic, I feel this is a very serious event which calls into question the safety of our entire national power grid. Clearly, the attack team who carried out this very skillfully targeted assault could carry out more such attacks in any other area of the nation just as easily. This attack shows how vulnerable and old our entire national electric grids really are. If some “gunfire” directed at two unguarded substations can knock out power to 40,000 customers, how many such attacks would it take to take down a large American electric grid for an extended period of time? It has been reported in past years that pre-positioned “sleeper cells” have likely been placed within the USA to do exactly this kind of attack against America’s infrastructure when given the order. It is clearly time to post guards at all critical utility infrastructures in the nation. What if sophisticated terrorists fire RPG rounds simultaneously into key power facilities pre-calculated to take down an entire multi-state power grid? What if they attack natural gas pipelines next? Was this the first in a series of additional “targeted” attacks or was it a “one off” event? We don’t know.

There have been authoritative voices warning about how vulnerable the electric grids of the USA (and all nations) are to an attack by Electromagnetic Pulse Weapons (EMP). We can now clearly add to that known threat another threat: that terrorists could take down the nation’s power grids by attacking us within our borders at key locations. What nations would have a current motive to attack American power grids? The first state-sponsored actor that comes to my mind is Russia. Russia is surely fuming that the USA is giving so much military help to the Ukraine to fight off a Russian invasion. One of Russia’s main tactics at present is to attack civilian electric power infrastructures throughout Ukraine to demoralize the nation’s civilian population. America and NATO nations are helping to rebuild Ukraine’s power facilities after Russia knocks them out with missiles and rockets. America is far too distant to attack with the Russian missiles being used against Ukraine’s electric facilities, but Russia could easily support sleeper cells within the USA to accomplish the same thing. Is Russia sending the USA a message that our electric grids are as vulnerable to clandestine Russian attacks as Ukraine’s are to missile attacks? Was this a warning to the American government to stop supporting Ukraine? Another possibility is Iran. Iran calls the USA “the great Satan,” and has long proclaimed its hatred of America as well as Israel. America and Israel have both pledged to never allow Iran to possess nuclear weapons. Could Iran be hitting us on our own soil in this “targeted” attack (the fourth link shows a map indicating what county in North Carolina was attacked)? China is also an obvious possibility as a state sponsor for this attack. Was China sending us a message how easily the USA could be attacked from within its own borders?

This attack will, hopefully, wake up not only American citizens but also our government into realizing how unprepared we are for open warfare with a foreign government. If such a war breaks out, we will be attacked throughout our nation within our borders. Such an attack against the USA and/or Europe in winter would cause an immense number of deaths. Are you prepared to protect yourself and your family if you lose electricity for an extended period of time? If you need some suggestions for a biblically-based preparation plan, please read my article, Should Christians Prepare for  Future Hard Times? You can prove that we are in the prophesied “latter days” foretold in the Bible by reading my article, Are We Living in the Biblical Latter Days?  The Apostle Paul warned that in the latter days, “perilous times would come” (II Timothy 3:1). A clearly “targeted” attack upon a US electric facility has now made us realize how “perilous” things could become if more such attacks occur in the future. We may have just had a taste of what is coming in the future.