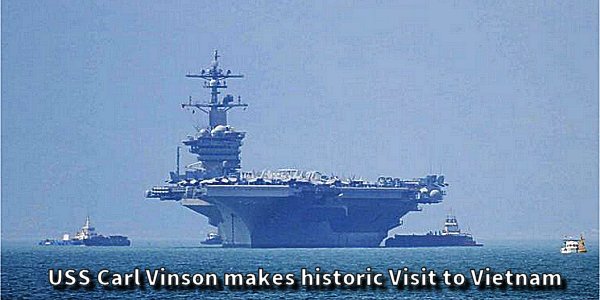 In a truly remarkable example of how rapidly the world can change within a few decades, the USA is sending an American aircraft carrier and its escort warships to a Vietnamese port for a friendly visit. The first link notes that this is a “dramatic evidence of deepening military ties” between the USA and Vietnam. [I couldn’t agree more.] This visit by a US carrier battle group to Vietnam is the culmination of many steps in the process of the USA and Vietnam drawing steadily closer together to confront China’s militarism. The first link also notes that Vietnam’s Deputy Defense Minister and a delegation of Vietnamese officials were previously invited aboard a US carrier off the USA’s coastline to witness active flight operations on the carrier. Vietnam has also obtained a surplus US Coast Guard vessel. The second link and third link add more analysis about the importance of an American carrier being welcomed by Vietnam on a friendly visit to a Vietnam port. The choice of the Vietnamese port city is significant in my view. It is the city of Danang, a major port used by US forces during the Vietnamese war decades ago. This time American forces are coming in the role of a new ally of Vietnam, not as an enemy.

Clearly, it is the mutual fear of Chinese militarism that is pushing Vietnam and the USA together. These links mention the “Quad” group of the USA, India, Japan and Australia who are creating a united front against China’s effort to seize control of the South China Sea, a vital international maritime body for global trade, and that all four nations are “boosting” their military ties to Vietnam. While many people do not realize it, Vietnam’s most recent war was not against the USA, but against China. In 1979, China invaded Vietnam and the barely one-month long war was so fierce that it is estimated that it caused 21-63,000 Chinese casualties and some tens of thousands of Vietnamese casualties. The fourth link describes this war and the fact that Vietnam did not talk about this war with its own people for a long period of time. That it is now doing so indicates, in my view, that Vietnam is preparing its people for China to be seen as the potential aggressor nation against Vietnam and to see the USA and other Pacific powers as new allies.

There is a further military development involving Vietnam and China that bears comment. India, a strong rival of China, has developed a supersonic cruise missile that can strike targets at least 800 km away from its launch point (fifth link). There have been reports for almost two years that Vietnam is buying this new supersonic missile from India. The sixth link adds that there is a naval variant of this missile with a shorter range and that China is likely to be angered about Vietnam’s interest in obtaining inventories of this supersonic Indian cruise missile. China has reason to be afraid of this supersonic cruise missile in Vietnam’s hands. Not only could this new Indian missile be fired at the new Chinese military bases built on previously-neutral islands in the South China Sea, but it could also be fired at another potential  target that is even more threatening to Chinese interests. If this new Indian cruise missile has at least a 800 km range, it may be that it can be fired at China’s Three Gorges Dam from bases in northern Vietnam in the event China provokes a regional war. This alone should give China pause about starting any major regional war over the South China Sea. Its Three Gorges Dam can easily be targeted by land-based or sea-based ballistic missiles as well as air-to-ground cruise missiles, but if Vietnam can fire salvos of land-based, supersonic cruise missiles at this giant dam, China could lose a regional war no matter what happens in sea battles over the South China Sea. If the Three Gorges Dam were breached by multiple warheads hitting it, the gargantuan volumes of water held back by the dam would rush through Southern China like a freshwater tsunami, destroying everything in its path. Vietnam could hold a pivotal role in deterring any regional war from happening if it has these Indian cruise missiles and aims them at Chinese targets from Vietnam’s northern region. Information about China’s massive Three Gorges Dam is included in the seventh link.

It is not just nations in the Indian and Pacific Ocean region that have a vital interest in making sure the South China Sea remains open for unhindered international maritime navigation. Huge volumes of European cargoes travel to their destinations via the South China Sea and the United Kingdom and France have both declared an interest in deploying their naval ships to the Pacific region to maintain free navigation of the South China Sea for their merchant fleets (eighth link and ninth link). More information about the “Quad” alliance of the USA, India, Japan and Australia is included in the tenth link, and, as an example of how many nations are concerned about China’s military aggressiveness, the final link reports that at least 16 nations are joining the Indian Navy in conducting joint naval exercises in the Indian Ocean. This will obviously be an effort to deter China from aggressive actions, but it remains to be seen if anything can successfully deter Chinese militarism.

The Bible’s prophecies have much to say about future major geopolitical events throughout the world, including the Pacific region, that will occur during the latter days of this age. To have an in-depth look at how the Bible’s prophecies can be applied to our modern global events, please read my articles, What Ezekiel 38-39 Reveal about a Future World War III , Japan’s Role in Biblical  Prophecy, and Are We Living in the Biblical Latter Days?