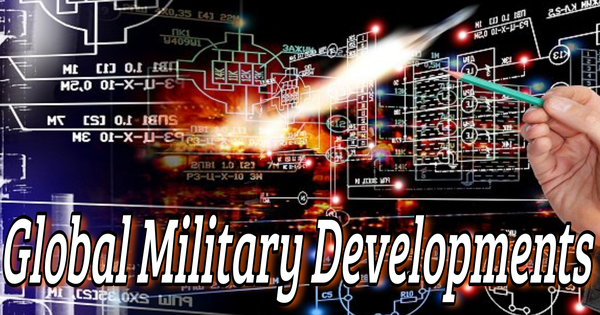 Rarely, we get a glimpse of advanced new technologies that are being invented “behind the curtain” of military secrecy. The first link offers a bare minimum of information about such a new invention. it describes a new type of “quantum radar technology” which operates on an entirely different plane than traditional radars. As research into quantum scientific fields progresses, it is inevitable that new quantum weaponry will be developed and deployed alongside traditional weaponry. This new technology is credited to Austrian scientists, and it sounds like this new type of military detection system is something right out of Star-Trek.

The second link warns that given the rapid increase in the number of Chinese navy warships, the USA needs to be alerted to the threat this poses to America’s dominance of the seas and that the USA must start building more warships. That warning makes sense to me, but it is discouraging to consider the information in the third link. That link documents the extensive damage to the USS Bonhomme Richard, a large US Amphibious Assault Ship that was being updated in a harbor facility when it caught fire and burned for days. Sabotage is now the suspected cause for this fire, which has almost certainly made this vital ship a total loss (fourth link). I also think sabotage is the cause of this ship’s disaster, and it highlights that major military assets can be destroyed before a war begins via the actions of saboteurs. China has committed itself to asymmetric warfare, and the more it can cripple US ships and planes before a war begins, the better will be China’s advantage. The loss of this important ship means the US military needs to greatly increase its security against such risks, and make sure defense contractors’ employees work under tighter control and supervision.

The fifth link details what may be a huge leap forward by the US Navy to protect its major warships such as aircraft carriers. I have posted on this possibility before, but the fifth link describes the possibility that the US Navy has already protected its major warships via “Tesla shields,” a barrier of intense electromagnetic energy through which physical armaments cannot penetrate. If this technology has been deployed, such shields can protect airfields, army formations, etc. just as easily as warships can be protected. Such shields would be another example of once-imagined Star-Trek technologies becoming realities. I’m sure many readers recall Star-Trek movies and episodes where the command “Shields Up” would be given to protect the space ships. It reminds me of the observation in Genesis 11:6 that what mankind imagines, it will eventually do.

The sixth link describes another wartime naval exercise by the US Navy in the Philippine Sea, which is obviously a warning to China that the US Navy is not yielding control of the Western Pacific to China. The Navy is also in the process of building a new type of drone submarine to operate with new sensor buoys to detect naval and submarine operations in the Arctic region (seventh link). However, such new technology could be deployed to any ocean or maritime body in the world.

Land-locked Switzerland has tentatively approved the purchase of both F-35 and F/A-18 warplanes from the USA as well as Patriot air defense systems (eighth link). As the link explains, Swiss citizens have voted to increase their military forces substantially, but these buys are not yet finalized as the American warplanes have European competitors competing for the new Swiss contracts. That even historically-neutral Switzerland sees the need to greatly increase its military forces indicates how strong the global military build-up has become.

Now lets shift to the Mideast. As readers know, the UAE and Bahrain recently signed peace agreements with Israel, joining Egypt and Jordan as Arab nations with normal diplomatic relations with the Jewish state. It is not taking long for military cooperation to take place openly. Israel and the UAE are expected to begin cooperating on military bases in the Red Sea region (ninth link), and Egypt may soon build a new base off the coast of Eritrea (tenth link). These measures are very understandable actions to safeguard the approaches to the Suez Canal–a critically important regional facility. An important deal has been made between the USA and Israel wherein the USA is buying Iron Dome Air Defense Systems from Israel (eleventh link). The Iron Dome system has been proven to be effective in defense of Israeli air space, so it makes good sense for the USA to buy these Israeli systems for protecting key US bases and facilities from attack. Israel has also publicly identified the location in Lebanon of another Hezbollah weapons storage facility (twelfth link), apparently like the one which blew up catastrophically recently in Beirut harbor.

Russia is also making major military investments. It is about to activate a huge new warship, a modern “Battle Cruiser” with all kinds of modern missiles and weaponry. It is likely fair to say this is the closest any modern warship is to the role of the battleships of World War I and II (thirteenth link). It is clearly made to conduct ship-to-ship warfare as well as ship-to-shore warfare. One estimate now reports that Russia’s military forces are at their highest level since the end of the Cold War (fourteenth link).

Readers are likely aware that the United Kingdom has built two ultra-modern aircraft carriers for the Royal Navy. The final link examines how these new British aircraft carriers will function in British fleet operations, and it also identifies some pressing needs for certain types of new warships in the British Royal Navy.

The above links make it very clear that the nations of the world are rapidly building up their military forces, and they are preparing for war. The links in this post describe weapons systems and actions that have been publicly acknowledged. What would really be interesting is to know about the weapons systems which are being kept entirely secret. Biblical prophecy reveals that at a future time when a new global “beast” system of government and finance is implemented, the world will marvel at the weaponry of the new beast system which will then be revealed (Revelation 13:1-4). At that time, the world will learn about new, high-tech weapons systems that have not been openly revealed yet. All these new weapons of warfare will eventually be used in a prophesied World War III. Ezekiel 38-39 and Revelation 19:11-20:4 are parallel prophesies about the great global war that will occur at the very end of our age. My article, What Ezekiel 38-39 Reveal about a Future World War III, examines and explains many Bible prophesies which offer various perspectives about this great end-time world war.