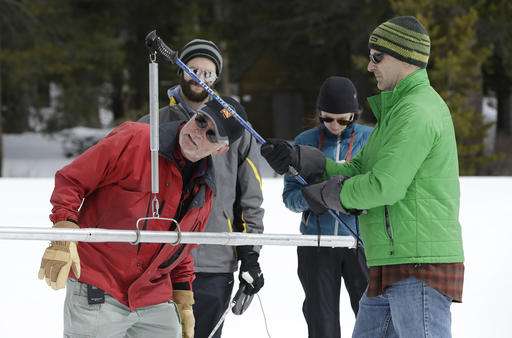 The great California drought is a subject that I’ve been following in my blog, as longtime readers know. As California entered this recent winter season, it desperately needed a good snowfall to build a snow pack in its mountain ranges that could refill its reservoirs and begin the process of recharging its aquifers. When the winter began, it looked like California would receive a lot of much-desired snow. However, the last part of the winter produced little snow (see first link and second link).

Based on the graphic in the first link, it would appear that the agricultural industry in the northern part of California should receive water allocations for growing fruits, vegetables and tree nuts. However, in much of the middle and southern regions of California, farmers will likely receive little or no water allocation for their farms. Since California produces so much of the USA’s food supply, the drought in California has a huge impact on America’s food supply. The ongoing and severe drought in much of California will steadily have a greater impact on America’s food supply as more farms have to shut down their production due to a lack of water.

I continue to marvel that with the gigantic Pacific Ocean bordering the entire western border of California that so few water desalinization plants have been built. The time may be coming when they will very much wish they had built a large number of such plants. At some point, if the great drought continues as climate experts have warned, those aquifers will be unable to supply any more water. Then California’s drought crisis will turn into a food supply crisis for the entire USA.