UNEXPECTED ASTEROID MISSES EARTH IN A NEAR MISS 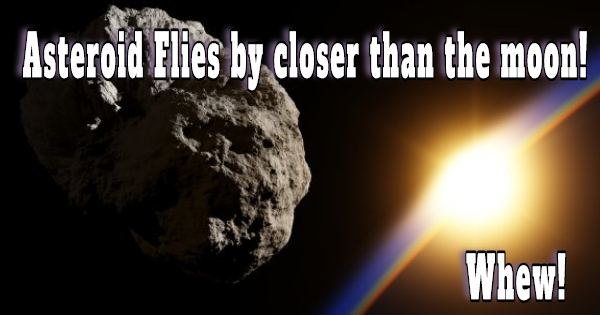 In July, an unexpected asteroid passed so close to the earth that it passed inside the moon’s orbit and much closer to the earth than to the moon. It was not seen until just before it passed earth because its approach to the earth was from the direction of the sun so instruments could not detect it. The object was estimated to be 100 meters long and it would have been a “city killer” if it had struck the earth’s surface. Reportedly, it would have struck the earth with the power of about 30 Hiroshima-sized nuclear weapons. The details of this near-miss fly-by of an asteroid are found in the first link and second link. One link has a good moving graphic of how close the asteroid came to earth. In cosmic terms, the distance by which this asteroid recently missed the earth could be likened to missing the earth “by a whisker.”

Earth agencies do try to map the heavens to locate asteroids, meteors or comets that could endanger earth, but they can’t possibly detect them all. Earth agencies that monitor these near-earth objects are forecasting that one object will come so close to the earth in 2029 that it will be visible from the earth’s surface as it passes by (third link and fourth link). While we do not know the years in which it will happen, the Bible prophesies that two heavenly objects will impact the earth in the latter days of our age. One is prophesied to hit the earth on the land and one will hit the earth in the water. Their impacts are described in Revelation 8:8-11. Verses 8-9 describe the object that will hit the earth somewhere in “the sea.”

The Apostle John, who witnessed the impact in an advance vision of the latter days, said he saw a heavenly object that was like “a great mountain burning with fire” hit the earth in a “sea.” His description of the falling heavenly object is almost exactly what Hollywood depicted in the movie, Deep Impact, in which a falling meteor hit the earth in the Atlantic Ocean off the eastern seaboard of the USA. That John saw the same type of event in his vision is a witness that what he saw was a realistic portrayal of a meteorite hitting the earth. The word “sea” bears some scrutiny. While we think of a large ocean as the region where such an impact will occur, it is not necessarily an ocean that will be hit. The Greek word that is translated “sea” means a “sea, lake or pool” according to my Young’s Analytical Concordance to the Bible. While the mathematical odds are that it will hit somewhere in the ocean, it could also be a much smaller body of water that is impacted. The word “sea” is attached to a wide variety of maritime bodies on the globe (the Mediterranean Sea, the South China Sea, the Barents Sea, the Red Sea, Sea of Galilee, etc.). It could be one of these smaller bodies of water that is impacted by a falling heavenly object, not a large ocean. The word leaves a lot of room for varied outcomes, but the sea has to be large enough to be a maritime body that has at least a considerable number of ships in it for “one third” of the ships in that sea to be sunk. It also has to be large enough for a falling heavenly object, to kill “only” one-third of the life in that sea. It is possible that God has not yet decided which “sea” will be impacted so he has given himself some leeway regarding how to fulfill this prophecy. It’s his earth so it’s his decision where it impacts. It must also be remembered that a large object impacting the sea would also cause a massive tsunami that would radiate outward in all directions from the point of maritime impact.

Revelation 8:10-11 describes the falling heavenly object that will impact the landmass of the earth. It is described as “a great star…burning as it were a lamp” in the language of the Apostle John who saw it in his vision. It falls on “rivers” and the “fountains of waters.” Rivers flow through landmasses, but there are many riverine areas in the world so this could happen in many locations of the globe. It does say it will hit “the fountains” of rivers/waters. The Greek word translated “fountains” in the King James Version of the Bible can mean “fount” or “source.” That would imply a region that is the source of a variety of rivers. It is clear from global maps that regions which give birth to a variety of rivers are generally mountain ranges that have glacial meltwater which feeds various rivers. Such regions on earth include the American Rocky Mountains, the Himalayan Mountains, the Andes Mountains, etc. The mountains of Ararat are the source of the Tigris and Euphrates rivers, the mountains/highlands of the Horn of Africa give birth to the White Nile, the Blue Nile, and other rivers. Any of the above regions could qualify as a “source of waters” that gives birth to rivers.

The prophecies are so close to each other in the book of Revelation’s accounts that it implies they could be a “one-two punch” which hits the earth within a short span of time. John described them as being different in appearance infers that they are different kinds of heavenly objects. The one that hits a sea sounds like an asteroid or meteor that impacts the earth. The one which burns like a lamp (with an extended length of vertical fire) sounds more like the tail of an incoming comet. We will have to wait and see what types of objects they are because John’s angle of viewing the two events could also alter how he described them.

What is clear from the account in Revelation is that these impacts will be nothing like the scale of the Chixulub crater off the Yucatan Peninsula of Mexico. That impact is regarded as having caused the global extinction of the dinosaurian world in the earth’s pre-history. Both the latter-day impacts prophesied in Revelation 8 will be very destructive, but they will not be planet-killers. They may not be many years off as we are already living in the prophesied latter days of this age on the earth. The Bible prophesies that the earth has an inevitable rendezvous with two heavenly objects that will impact the earth. These impacts, while not planet-killers, could be large enough to fulfill prophecies in Isaiah 24:19-20 which describe an earth that develops a noticeable wobble in its orbital path around the sun and/or an altered tilt of its orbital axis. That kind of outcome would cause global damage.

Those desiring evidence that we are, indeed, living in the latter days of this age when many important biblical prophecies will be fulfilled are invited to read my free article, Are We Living in the Biblical Latter Days? Those who would like detailed information about the earth’s pre-history in which the Chixulub asteroid or meteor crater was formed and the dinosaurs died are invited to read my free article, Is the Earth 6,000 Years Old?