UK Court Tries to Upset UK’s Brexit Vote, but Will Queen Elizabeth Have the Final Say? 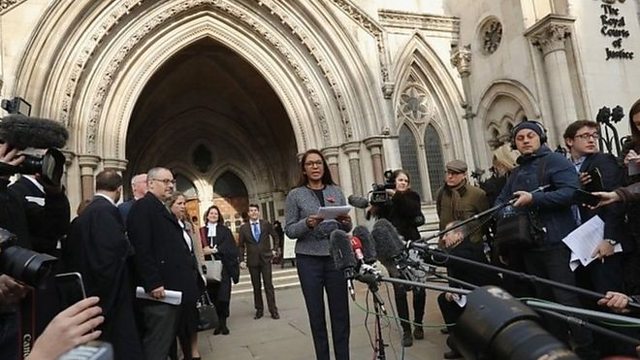 As readers no doubt know, a “High Court” in the UK has ruled that even though the people of of the UK voted to leave the EU in the Brexit vote, the UK cannot leave the EU until Parliament has a vote on the matter. This ruling tries to tie the hands of the UK’s Prime Minister, Theresa May, who had intended to invoke the EU’s article 50 clause in March, triggering the UK’s exit process from the EU. However, this High Court does not have the final say in the matter. The UK’s government intends to appeal this ruling to the UK’s highest court for a final ruling. As I understand it, the High Court that ruled Parliament had to vote on the matter was a London-based court. London voted heavily to Remain in the EU, and the London elites and the financiers and bankers of its “The City” district strongly favored the Remain side as well. I suspect that this is a delaying tactic by the Remain side, which is in a full-fledged hissy fit over losing the Brexit vote. The first link and second link offer many details about this development.

When/if the UK’s highest court takes up this case, I think the finding of the London-based court will be overruled. As is pointed out in the third link, the British Parliament already has voted on the matter. It voted to refer the decision to the voters of the nation, and declared the decision in the public vote would be final. The UK court knows all this, but made a ruling which all but pretends to be unaware that Parliament already voted on the matter when it deliberately referred the matter to the referendum. As is pointed out in these links, there will be a huge backlash if the UK’s highest court does not rule on the matter in a way which acknowledges clear reality. The third link cites the views of a former senior adviser to British Prime Minister David Cameron that the London-based court’s ruling is an example of “staggering arrogance of the liberal elites.” He is quite right, in my view.

Most interestingly, the first link reports that British PM May is arguing that “the historic power of royal prerogative gives her authority to launch the Brexit process” with or without Parliament’s further approval. I was unaware of this power by the ruling monarch of the UK until I read this article. This power has been used in the UK “to make decisions without consulting Parliament and has been used to adopt international treaties (emphasis added).” This royal prerogative power argues that the current ruling monarch, Queen Elizabeth, may have the ultimate authority to decide the Brexit question. This is most interesting to me as I make the case in my book that the ruling family of the UK (and many other royal European houses) have descended from the royal house began by King David of ancient Israel, who was promised by God he would establish a perpetual covenant that David’s descendants would always have rulers over the house of Israel (Jeremiah 33:17-22). This case has been made by many others besides me. Since the ruling house of the UK is descended from King David, this fact affirms the accuracy of the Bible as the British nation is descended from the leading ancient Israelite tribe of Ephraim, as can be seen in the evidence in my books on this subject–which I urge people to read to be fully-informed on this overwhelmingly overlooked historical truth.  [As an aside, I was in London in 1978, and at that time one could purchase a pamphlet that traced the descent of the British monarchs to ancient King David; I’d be surprised if that pamphlet hasn’t been withdraw by the political elites by now as they surely want to “hold back the truth,” as Romans 1:18 foretold].

I think it is evident that the ruling elites in the UK are trying to subvert the will of the people in this London court case. The bankers, financiers and corporate bosses who inhabit The City within London are a key part of the global power structure of insiders who actually control international affairs. They are collectively called “Babylon the Great” in Revelation 17-18. While Revelation 17-18 prophesy that this current power structure of well-connected private sector and governmental insiders (Revelation 18:3) will be overthrown in the latter days of our age by a new power called the “seven heads and ten horns” who will put in power a new “beast” system, the current Babylon the Great bloc is addicted to power and will not yield it willingly. Revelation 17:16 foretells that it will finally be taken down in a very hard manner. Babylon the Great is also called the “Great Whore” in this prophecy (an apt name for a corrupt insider system where everything is for sale in “pay to play” bribery arrangements, insider manipulations, etc.). Verse 16 prophesies the ten horns (a part of the yet-to-come system) will “hate the whore, and shall make her desolate and naked, and shall eat her flesh, and burn her with fire.” That sounds like a very hard takedown to me. Putting this metaphorical language into modern words, this could mean the ten horns will “expose all her corrupt secrets, seize all her ill-gotten assets and permanently destroy her hold on power.” This hard takedown could easily involve wars and all kinds of hardball deals, betrayals and machinations on both sides.

What we are seeing in the Brexit challenge by a London-based court, is, in my view, an effort by Babylon the Great’s system to hang onto its power over the nations and keep the UK “imprisoned” inside the EU–a key part of Babylon the Great’s current global system. I expect, on the clear merits of the case, that the UK’s highest court will overrule the London-based court’s opinion. Even if it does not, it appears that Prime Minister May will go ahead with the Brexit, robed in the power of “royal prerogative” and the majority support of the British people.

For greater insights into biblical prophecy on this power struggle between Babylon the Great’s current bloc and the coming “seven heads and ten horns” bloc, I urge you to read my articles, Is Babylon the Great about to Fall…Ushering in a New Beast System? and The Babylonian Origin of the Modern Banking System. If you do, you will understand what is happening behind the scenes in today’s geopolitics from a biblical perspective.