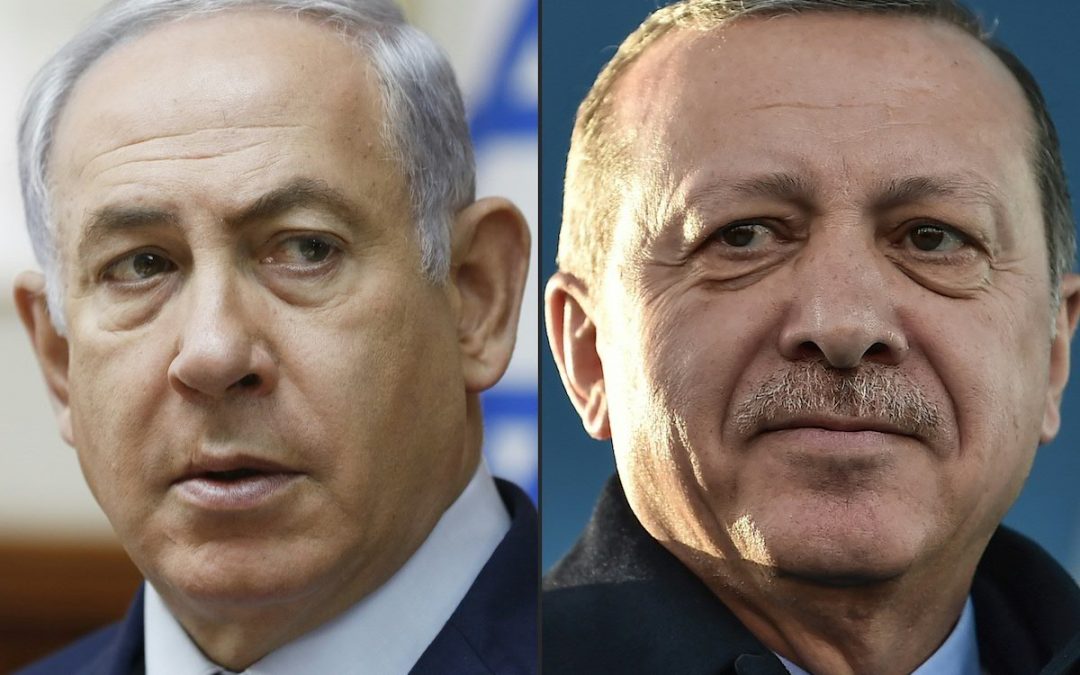 A major development has occurred in the Mideast, and the American mainstream media have mostly ignored it. However, it signals a major change in the foreign policy of Turkey which will work in favor of even greater cooperation between Israel and Sunni Muslim nations. Taking the world by surprise, Turkey reversed its anti-Israeli policy by announcing it was re-appointing an ambassador to Israel, a major step which is necessary to restoring full diplomatic relations between Israel and Turkey. The first link offers an analysis that this change in policy is helpful to both nations. It mentions an important issue that often gets overlooked in Mideast commentaries. A huge natural gas field is being developed in the Eastern Mediterranean region, and Greece, Israel, Egypt and Cyprus are allies in developing that field. Turkey wants a share of that field’s revenues, but it has been the “odd man out” because of its hostile relations with those nations. Turkey’s efforts to re-establish normal relations with Israel is likely an effort by Turkey to gain an acceptable share of the gas field’s revenues via peaceful means. The four nations already developing the gas field would be wise to “deal Turkey in” and let them have a share of energy revenues that is acceptable to all. This avoids a war wherein all parties will lose and the infrastructure being developed will be destroyed or remain at risk. With Turkey joining the other four nations as a partner, all will make money and all these nations will become allies in defending the gas field.

Of course, nothing in the Mideast is ever simple. The issues go much deeper than gas field interests. The Turks and Israelis found themselves on the same side of the recent and brief Armenian-Azeri war in the Caucasus Mountains. Turkey has long hated the Christian Armenians and killed many of them in World War I times–a fact acknowledged by virtually everyone but the Turks. Israel has an interest in staying allied to Azerbaijan. Azerbaijan and Iran are two Shiite-majority Muslim nations. Iran hates Israel and wants to destroy it; however, Azerbaijan and Israel have traditionally had positive ties and Israel wants to have good ties with at least one Shiite nation. Having Turkey and Israeli operatives working side-by-side as allies in that recent conflict may have contributed to Turkey’s recent effort to improve ties between Turkey and Israel.

Under President Erdogan, Turkey has long had a hostile policy toward the Jewish state, so what else prompted the change in policy? Turkey has competed with Saudi Arabia for leadership in the Sunni Muslim world; however, Turkey’s warming ties with Russia and Iran have made Turkey less trusted in the Sunni nations. Also, the rapid development of the Abraham Accords has left Turkey marginalized as more Sunni nations normalize ties with Israel to forge an effective counterweight to the Shiite Iranian threat to all of them. Turkey has been a firm supporter of the Palestinians and thought this would make them a leader in the Sunni Muslim world. However, the opposite has happened. As more Sunni nations forge close ties with Israel in spite of the Palestinians’ endlessly unrealistic demands, Turkey’s adamantly pro-Palestinian stance now wins little support from Sunni Nations whose existence is threatened by Shiite Iran. I think Turkey’s efforts to establish better ties with Israel is a recognition of the reality that the Sunni Arab world is steadily moving into an allied position with the Israelis. The second link and third link offer perspectives on this Turkish policy change from both the Arab and and Israeli media.

The Abraham Accords are rapidly warming ties between Israeli and Sunni Arab nations. The fourth link details information on the friendly ties growing rapidly between Israel and the UAE which would have been “unthinkable” a short time ago. Israelis are scheduling many celebrations, weddings, trips, etc. in Dubai, the capital of the UAE, and the UAE is going all-out to welcome them. According to the fourth link, 70,000 Israeli tourists visited the UAE just in December, and Hebrew songs can be heard blaring from loudspeakers in downtown Dubai. Jews can now openly wear kippahs in the UAE. The fourth link quite accurately states: “The dizzying pace of the normalization has stunned even the skeptics.” Turkey sees all this and realizes that being anti-Israeli and rigidly pro-Palestinian was no longer going to win it any favor in the Shiite Arab world. Indeed, as the Trump term of office draws to a close, US Secretary of State Pompeo has urged the Saudis to normalize relations with the Israelis sooner rather than later (fifth link). Since Saudi Arabia already signaled its approval of the Abraham Accords by allowing the Israelis to have overflight rights through Saudi airspace to enable air service between Israel and the UAE, it seems only a matter of time till the Saudis openly join the Abraham Accords. When the Saudis join the Abraham Accords, I expect Oman to join as well as it shares a land border with both the UAE and the Saudis, and already has hosted Israeli Prime Minister Netanyahu for a state visit.

While the Turkish olive branch to Israel is not wrapped in the mantle of the Abraham Accords, it actually could be. The Abraham Accords gets its name from the fact that Jews/Israelis and Arabs are both descended from the patriarch, Abraham (the Jews via Issac and Jacob and the Arabs via Ishmael). However, Abraham has far more descendants than just those two groups. Abraham also fathered the “ten tribes of Israel” via Isaac and Jacob, a number of eastern Asian peoples through the descendants of his concubines which “he sent away to the east” (Genesis 25:5-6), all the modern nations descended from Abraham via his last wife, Keturah (Genesis 25:1-4), and the descendants of Esau, who was also a son of Isaac. Abraham was promised that God would make him the patriarch of many nations (Genesis 17:1-7). God has kept his word. The descendants of the ten tribes of Israel can easily be traced to be the modern western nations as my books abundantly make clear (they can be obtained at the home page of my website). As a free introduction to the topic, you may see the prophecies about the United States of America in my article, The USA in Bible Prophecy. Research documenting the main points about the locations of several of the modern tribes of Israel can be found listed in the “Articles” tab at my website (all of them are free).

So where does Turkey fit in the mix of Abrahamic nations? In Genesis 36:1, the Bible tells us that the descendants of Esau are also called Edomites. One of their dominant tribes was named after a prominent grandson of Esau, Teman (Genesis 36:11 and 15), and apparently a large portion of ancient Edom’s territory was once named after Teman (Genesis 36:34). Since vowels were not usually included in the scripts of ancient languages, names and words are traceable over time via their consonants. As a result, the consonants of ancient peoples and words remained fairly constant, but the specific vowels and their placement within words eventually took various forms. Where do we find in the modern Mideast world a nation whose historic names include the “T-M-N” consonants of Teman’s name? The answer is easy. For centuries the previous name of Turkey was the “Ottoman” Empire. That name has consonants which spell out “T-MM-N,” the same as the Edomite nation of Teman (consonants sometimes were doubled as words changed over time). This identifies Turkey as Edom, which makes it a modern nation also descended from Abraham. As such, it could join the budding Israeli-Sunni Arab bloc as another nation descended from Abraham.

Turkey’s rapprochement with Israel also acts to fulfill another prophecy about the latter days. Ezekiel 38-39 contains a prophecy about a global World War III at the very end of our age, and the nations in the alliance that will launch this surprise attack on a rival alliance in the world are named. That list of nations in the Gog-Magog alliance includes Russia, China, Iran and their allies. Not a single nation descended from Abraham is listed as a member of the prophesied Gog-Magog alliance, arguing all the nations descended from Abraham are in the alliance that will be attacked by the Gog-Magog nations. Turkey has been trending toward an alliance with Russia and Iran in recent years, threatening to dump millions of refugees into EU nations and buying a Russian air defense system designed to shoot down NATO warplanes though Turkey is a member of NATO. Indeed, Turkey’s foreign policy has been alienating its traditional allies, risking that it will be left without any true friends in the world. I think Turkey now realizes this and the olive branch of friendship offered to the Israelis is a sign Turkey is moving away from Russia and Iran and back into a normal relationship with its logical and traditional allies. If so, I welcome and applaud that decision.