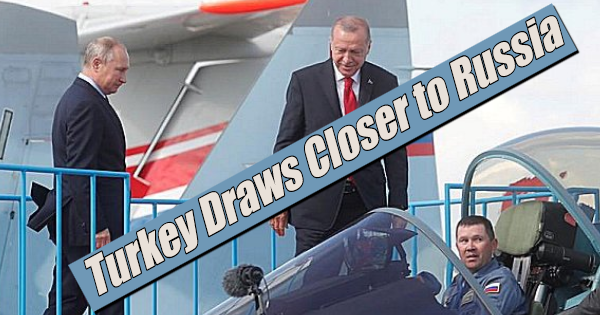 Turkey is continuing to align ever-closer to Russia, which is a very worrisome trend for NATO nations. This trend of Turkey aligning itself with Russia and distancing itself from its NATO allies is accelerating. Turkish military personnel are now in Russia being trained to operate the Russian S-400 air defense system Turkey purchased from Russia (first link). There is also now a report that Turkey may be considering the purchase of Russian warplanes for use in the Turkish military (second link). Turkish President Erdogan has also made a stunning announcement that Turkey may need an inventory of its own nuclear weapons (third link). Such a development would surely destabilize Europe and the Mideast in dangerous ways. For example, if a Turkey hostile to Europe gets nukes, Greece and other European nations will have to obtain them too. Why is Erdogan making this announcement at this time? Perhaps it is because the USA, which has stored some American nuclear weapons at its Incirlik Air Force Base in Turkey for NATO purposes, is now in the process of moving those American nukes from Turkey to Romania (fourth link and fifth link). Clearly, the reason for moving American nukes out of Turkey to reposition them in Romania is because Turkey can no longer be trusted to act in NATO’s best interest. Given the developing Turkish-Russian relationship, there surely is a real concern that Turkey may decide to try to seize the American nuclear weapons at some point in the future. If that ever happened, there would be a huge crisis as Turkey would put itself in the cross-hairs of the NATO nations. It makes sense to move the nukes out of Turkey due to the worsening instability in Turkey’s relationship with NATO nations.

There is another situation adding to the tensions between the Turks and the USA. As readers likely know, The USA’s main ally in defeating ISIS forces in northern Syria and Iraq were the Kurdish Peshmerga forces, who fought tenaciously and effectively against ISIS fighters. The Kurdish forces in Northern Syria are known as the YPG. Turkey keeps insisting the YPG are a threat to Turkey, even though I can find no evidence that a YPG fighter has ever harmed any Turkish interest or conducted any terrorist attack into Turkey. It makes no sense to me that after fighting the vicious terrorist army of ISIS, the YPG would act as terrorists toward Turkey (or anyone else). Nevertheless, Turkey regularly tells itself the YPG is a threat to Turkey and the USA has accommodated Turkey by agreeing to create a safe zone of some kind where Turkish and Kurdish YPG forces would be separated by a number of miles along the Turkish-Syrian border. It’s not clear how wide this safe zone will be as the width of this zone varies depending on who is discussing it. The sixth link describes the initial implementation of this safe zone, and the seventh link indicates the Kurds are beginning to withdraw their forces from the border region but they want Turkey to withdraw their forces from the border as well to lower tensions in the region. In spite of these initial measures, Turkey continues to threaten a Turkish invasion of Northern Syria if the safe zone does not develop to Turkish satisfaction (eighth link). Any such action would create a Turkish confrontation with the USA (and NATO). The most recent reports I’ve seen indicate that there are still the US and French military forces embedded with the Kurdish YPG as allies in suppressing any revival of ISIS influence in that region. Any Turkish invasion into Syria could, therefore, easily result in a military confrontation with US and NATO forces. The confrontation would likely be even larger in scale because the Syrian Kurdish YPG force is allied to the Kurdish Peshmerga forces in Northern Iraq and the Kurdish forces are allied with the Iraqi military forces…who are backed by Iran. Such mixing of many armies in one region could result in a large war erupting if a spark sets it off. Turkey seems to be almost eager to set off such a spark in its repetitive anti-YPG proclamations. The stakes are high for President Trump and the USA and NATO as well. The USA and NATO cannot abandon their loyal Kurdish allies. All the nations are watching what happens along the Syrian-Turkish border.  if Trump abandoned the Kurds to slaughter at the hands of Turkey, Trump and the USA would have no credibility left in the world and many nations will surge toward obtaining nuclear weapons as they will know they can no longer rely on the USA and its “nuclear shield” to protect them.

Turkey is also directly challenging the European NATO nations. It is threatening to dump millions of Syrian refugees into Europe unless the European NATO nations pressure the USA into bowing to Turkey’s anti-Kurdish demands on the safe-zone separation issue (ninth link). The EU is already deeply divided on immigration matters, so any such action by Turkey could tear apart the EU politically. To forestall another internal EU crisis, it would be in the EU’s interests to send military forces to Turkey’s border to block any such move. Given his threats against the Kurds, the USA, and Europe, Erdogan may succeed in uniting all these groups against Turkey. Whatever Erdogan’s private agenda is, he may end up leading Turkey into becoming a Russian vassal state if he persists in his current course of action. This is a very dangerous situation the mainstream media seems to largely ignore.

Turkey is clearly heading toward a tipping point where either it will formally leave NATO or NATO will expel it from the alliance. Turkey cannot buy Russian air defense systems designed to shoot down NATO warplanes as well as buy Russian warplanes for its air force inventory and expect to stay in NATO. I suspect that NATO is holding off in expelling Turkey in the hope that Turkey’s leaders will come to their senses and again start acting like a NATO ally. The future is still not certain, but Turkey seems quite fixed in its current source of action, which will mean its exit from NATO is only a matter of time. Russia will be delighted at splitting of the NATO alliance if this happens, and Turkey’s Erdogan may find, much to his displeasure, that Turkey is at risk of becoming simply a Russian vassal state–a Russian-dominated nation much like Belarus.

Where does this situation fit with biblical prophecy? The prophecy of Ezekiel 38-39 lists the nations that will be in the Gog-Magog alliance (Ezekiel 38:2-6). I cannot see Turkey anywhere in that prophesied roster of nations. Indeed, not one nation descended from Abraham is listed as being a member of the Russian/Chinese/Iranian Gog-Magog alliance. I have long seen Turkey as a major nation descended from Abraham via Edom (Esau). One of the chief tribes of Edom were the descendants of Teman (Genesis 36:1, 8, 11 and 34). This is how the name appears in English Bibles. The consonants of that name are T-M-N.  The previous name of Turkey was the Ottoman Empire, and the consonants of the word, Ottoman, are TT-M-N, a match to the consonants of the Edomite tribe. Teman is not listed as a member of the Gog-Magog alliance in Ezekiel38:2-6, but a generic phrase “and many people with thee” in verse 6 does allow for other nations to become a part of the Gog-Magog alliance that is not specifically prophesied to be there by God. For more in-depth information about what the Bible prophesies about modern alliances and global, age-ending conflict, please read my free articles, Are We Living in the Biblical Latter Days? and What Ezekiel 38-39 Reveals about a Future World War III. My books on the history of the ten tribes of Israel, tracing them throughout their migrations from the time of their exile from the ancient Promised Land and linking them to specific modern nations, can be obtained at the home page of this website. For a flavor of what is in the books, please read my free article, The United States of America in Biblical Prophecy. There appears to be many modern Christians who think the USA is not discussed or prophesied about in the Bible’s end-time prophesies. If you read this article, you will see the USA can be found in biblical prophecy.