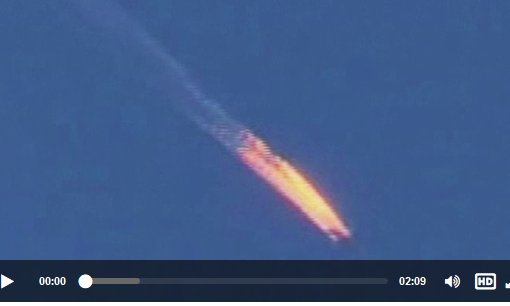 As all readers know, Turkish jets shot down a Russian warplane recently near the Syrian-Turkish border. This has deeply soured Turkish-Russian relations and has prompted a series of strong counter-moves by Russia. Turkey has accused the Russian warplane of violating its airspace and Russia maintains its warplane was over Syria when it was shot down by Turkish jets. However, there seems to be no doubt that the Russian plane crashed within Syrian territory, weakening the Turkish claim. However, the plane was shot down so close to the border that it could have been on one side of the border when hit and crashed on the other side of the border. Facts are murky on the exact location of the Russian plane when it was shot down by Turkish planes. To make matters worse, a Russian helicopter sent to rescue a downed Russian pilot was blown to bits by Turkish-supported rebels on the Syrian side of the border. The greatest outrage of all is that a Russian pilot ejected from his damaged plane and was killed by ground fire from Turkish-supported rebel forces inside Syria while he parachuted to the ground. Firing on airplane crewmembers who are helplessly parachuting to the ground is a very serious violation of international laws and/or norms.

The reaction by Russia was swift. As detailed in the first link, Russia has implemented a number of retaliatory steps. Economic reprisals include banning Turkish products from being shipped to Russia, detaining and deporting Turkish businessmen in Russia, cancelling all cultural exchanges and Russia may even cancel an oil pipeline project which would have been very beneficial to both nations. Putin has also ordered a Russian navy ship off Syria’s border to open fire on any warplanes attacking Russian jets along the Turkish-Syrian border (second link). Even more important is the shipment of a sophisticated Russian S-400 air defense system to northern Syria where it can fire on aerial targets over much of Turkey, eastern Syria, Lebanon, and even that portion of Israel north of Jerusalem (third link). Russia would not be sending such a sophisticated and major Russian weapons system to Syria unless Russia was very determined to put enough military force into Syria to make sure that it never falls into enemy hands. See the third link’s map of the extent of the S-400’s range within the Mideast. This is a major escalation of Russian power into the Mideast. It would have been vigorously opposed by other nations unless Russia had been given a provocation to take such an action as was given to it by Turkey.

Media reports have cited reports of Turkish pilots warning the Russian warplane that it was in Turkish airspace. The voices of Turkish pilots that I have heard on televised media reports were in the English language and I’ll bet they were being transmitted on NATO radio frequencies that the Russian warplane’s cockpit crew could neither hear nor understand. I would bet that the Russian cockpit crew was focused on their targeting system for their mission and were listening to their ground controllers on their own Russian radio frequencies. I doubt they ever heard any Turkish warnings.

Putin, ever the geopolitical “chess” grandmaster, has been given a lemon and he is making a great deal of “lemonade” from it. In chess terminology, he has lost a couple of “pawns” (a warplane and a helicopter), but in placing a powerful air defense system into Syria, he has gained a ‘”rook” on the Mideast chessboard. I think it also galls Putin that Turkey’s warplanes were able to shoot down a Russian warplane with ease and a Russian helicopter was nothing but a “sitting duck” for ground fire from Turkish-supported rebels who seem to be using a US TOW anti-tank system to destroy the helicopter. Putin has also served notice that Russian fighter jets will now accompany Russian warplanes that are on bombing missions near the Turkish border. I believe Putin is serving notice that he intends to make sure the next casualties on the border will be Turkish planes and pilots.

The first link includes the very interesting piece of information that the USA had received from Russia information about where and when Russian warplanes would be flying missions. This was intended to prevent incidents like the one which occurred. However, Putin blames the USA for giving this information to Turkey so Turkey could preposition warplanes to be in the area when Russia was going to conduct its ground attack missions. This likely kills any interest or willingness on Putin’s part to trust anything the Obama administration says or does.

Turkish leader Erdogan shows no indication of apologizing to Russia or acting to defuse the crisis. Personally, I think Turkey is going to suffer the most as a result of what has happened. It stands to lose a lot economically, and now Russia has an air-defense system that can control airspace or attack airplanes deep inside Turkey’s borders. Turkey has also been supporting Turkoman militias opposed to Assad on the ground inside Syria. These are ethnically related to the Turks. Because of their actions, Putin will likely single them out for heavy punishment in Russian air attacks in the future. Erdogan will likely be worrying less about Kurdish actions in the future and more about Russian actions.

There have been knee-jerk reports that this Turkish-Russian confrontation could result in a war of NATO vs. Russia due to the NATO treaty agreements. I think such fears are very much overblown. Do you think Latvia, Lithuania and Estonia will invade northern Russia because of a Turkish-Russian spat far from the Baltic region? Not a chance. Indeed, one major NATO member is essentially siding with Russia to intensify the air war vs. ISIL in the Mideast. French President Hollande has visited both Obama and Putin since the ISIL attacks in Paris and the downing of the Russian airliner due to an apparent ISIL bomb. France and Russia are going to work closer together to coordinate their actions and France has also taken the major step of sending its aircraft carrier to the Eastern Mediterranean Sea to attack ISIL targets inside Syria and/or Iraq (fifth link). The fifth link also reports the British Royal Navy is sending a warship to help defend the French carrier which is also accompanied by French surface warships and French submarine to protect it. Even Germany has reversed its policy of non-involvement in the Mideast by sending support aircraft from its air force and a German warship to help the effort vs. ISIL in the Mideast (sixth link).  With major NATO nations supporting the Franco-Russian alliance to “get serious” about fighting ISIL, do you think Turkey will have any success in dragging NATO nations into a confrontation with Russia? Forget it! In my view, Erdogan is badly overplaying his hand.

I believe France’s Hollande tried to get Obama to get serious about fighting ISIL, and that effort has apparently failed. That is why France is turning to Russia for a main partner in fighting ISIL. American leadership in the Mideast and the world has perished under Obama. The entire world knows that Obama has been fighting a “phony war” against ISIL (see my recent post on this topic), and so the world is simply ignoring Obama and the USA as being irrelevant as long as Obama is president. It truly appears that, unless something radical happens soon, the USA will essentially be a non-player in serious global affairs until the USA has a new tough-minded, nationalistic president. The final link is a column from the Minneapolis Star-Tribune where the writer contrasts the styles and language of Presidents Hollande and Obama after their meeting about ISIL. President Hollande’s response to ISIL is seen as “forceful” while Obama’s is seen as “discouraging,” and the columnist even disparagingly refers to Obama as “President Oh-bummer.” [You may have to access this link’s column via social media sites.] I read it in the print version of the newspaper.

I do see a biblical implication in what is happening between Turkey and Russia. Turkey’s Erdogan has been leading Turkey into an Islamist future and has been cozying up to Russia as a partner. As the first link notes, Putin is quoted as saying that before the Turkish attack on a Russian warplane, “Turkey was our friend, almost an ally, and it is a shame that this was destroyed in such a foolish manner (emphasis added).” Notice Putin referred to Turkey, a NATO member, as “almost an ally” of Russia prior to this breach between the two nations. This shows how eastward Turkey was drifting. Indeed, it seemed that Turkey was barely in NATO in some respects before this happened.

The Bible records that God has caused or allowed things to happen in biblical narratives to cause “offenses” between individuals or nations so his prophecies came to pass as predicted or to accomplish God’s will among the nations. God may have seen Turkey’s tilt toward Russia and Islamist directions and God may be involved with this current deep offense between Turkey and Russia to drive Turkey away from Russia and the Gog-Magog alliance. Proverbs 21:1 tells us that God will move the hearts of national leaders to do whatever he wills them to do whenever he wants them to do it. God can soften a leader’s heart or harden it. It may be that God “hardened” Erdogan’s heart to do something that will push it away from Russia and the Gog-Magog alliance. The military push of Russia into the Mideast and the increasing militarization and aggressiveness of Russia, China and Iran are also all cementing the Gog-Magog alliance as prophesied in Ezekiel 38-39 and the Gog-Magog nations are becoming ever-more emboldened by Obama’s weakness and the American retreat from being a serious global superpower. This is also acting to set the stage for the eventual fulfillment of Ezekiel 38-39’s prophecy some time in the years ahead of us.