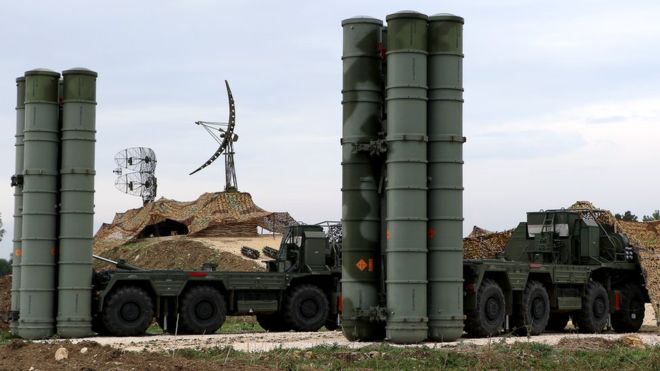 In a move that marks Turkey’s transition from a trusted NATO member to an untrustworthy NATO member, Turkey has formally put money down on buying Russia’s S-400 air defense system–which was designed to shoot down NATO warplanes and (most likely) NATO cruise missiles. As the first link and second link note, the NATO alliance needs its members to have compatible military equipment, and the Russian S-400 air defense system is entirely incompatible with NATO military systems. Turkey knows that very well, but they have decided to tell NATO to “stick it!” This new Russian air defense system is compatible with Russia’s own national air defense system and with the Russian air defense systems placed in Syria and Iran. Based on the maxim, “Actions speak louder than words,” this Turkish action shows that Turkey, under Erdogan, has taken a major step to linking his military forces to those of Russia and Iran and their allies. These are the nations identified as the Gog-Magog alliance in Ezekiel 38-39. While Turkey is not mentioned by its biblical name of Edom or Esau as being in the biblically-identified Gog-Magog alliance in Ezekiel 38:2-6, the generic phrase “and many nations with you” in verse 6 allows for nations not specifically mentioned in the prophecy to become part of the Gog-Magog alliance. Turkey is headed in that direction at present.

The first two links understate the obvious fact that Turkey’s action is a major step in a direction out of NATO, but they do detail some of the consequences for Turkey’s action. The second link states that Germany is stopping shipments of German arms to Turkey, and the second link warns that the status of US forces being able to use the Incirlik air base in Turkey is now being called into question. Turkey has the second largest army in NATO, so if it formally leaves NATO, the remaining NATO nations will be forced to significantly boost their own military spending and the size of their armies. If Turkey continues on its current course, the USA would likely have to deploy its sophisticated THAAD air defense system to several nations in NATO, most likely Poland, Germany, Greece, and perhaps even the non-NATO nation, the Ukraine. I doubt Russia wants that to occur, but it is a logical result of Turkey drifting out of NATO. NATO would likely quickly admit the Ukraine into NATO if Turkey switches sides and embraces Russia.

What is even more dangerous is that Turkey will align itself with Russia but not formally leave NATO. That would make Turkey a Quisling member of NATO which could no longer be trusted within the NATO military or command structures. Given Turkey’s strong lurch toward Russia with its purchase of the S-400 air defense system, the other NATO nations will likely have to take steps to exclude Turkey from NATO’s inner circle and make changes to all IFF codes and military frequencies that exclude Turkey. What other choice do they have? When the Russian S-400 air defense system is installed in Turkey, all NATO intelligence and defense agencies will want a chance to examine this sophisticated Russian hi-tech system. Russia will also want its technicians to secretly examine NATO systems inside Turkey. If Turkey refuses to allow its NATO allies to examine the anti-NATO S-400 system, then Turkey will have made a firm choice to leave NATO.

The third link and fourth link note that Turkey, Iran and Qatar are forming a tripartite group that looks like the beginning of an alliance to oppose the Sunni alliance of Saudi Arabia, Egypt, Jordan, the United Arab Emirates, etc. The regional Sunni powers imposed sanctions on Qatar for aiding/hosting terrorist organizations, and Turkey’s responded by sending Turkish troops to Qatar to bolster Qatar’s military forces. I think it’s becoming clear where Turkey’s (i.e. Erdogan’s) allegiances lie. The third link also details the common Turkish-Iranian animus toward the Kurds, who are arguably the best fighters against ISIS in the Mideast and the force most loyal to American and Sunni interests in the Mideast. If the USA has to withdraw its military assets from the Turkish base in Incirlik, they will have to relocate to a different base in the region. Perhaps that base will be a large new US air base built in Irbil in a newly independent Kurdistan after ISIS is defeated. While Erdogan hates the Kurds, his actions in snubbing NATO and pushing Turkey into the grasp of the Russian bear will likely accelerate an independent Kurdistan south of Turkey.

I would be greatly relieved to be wrong in the following observations, but it appears that Turkey (under Erdogan) is betraying both its NATO allies and its fellow Sunni nations and that it may be cozying up to Shiite Iran to help make Turkey a nuclear power in its own right. If it even looks like this might happen, expect Saudi Arabia and Egypt to quickly decide to become nuclear powers as well. They would have no choice but to do so. Israel would likely have to take significant military steps to counter a Turkish-Iranian alliance if that comes into being.

The world is really becoming a very perilous place, just as Matthew 24:22 and II Timothy 3:1 prophesied would be the case. For convincing evidence that we live in the biblically-prophesied “latter days,” please read my article, Are We Living in the Biblical Latter Days?

My thanks to a reader for sending me one these links.